On Saturday, Iran marked what President Hassan Rouhani called a “golden page” in the country’s history when the IAEA ruled that Tehran had stuck to its commitments under last year’s nuclear accord.

Moments after the ruling was handed down, the US and the EU each lifted nuclear-related financial and economic sanctions on the “pariah state,” much to the chagrin of Israel and Tehran’s regional rivals who view the West’s rapprochement with the Iranians with deep suspicion.

“Everybody is happy except the Zionists, the warmongers who are fuelling sectarian war among the Islamic nation, and the hardliners in the U.S. congress,” Rouhani said, referring directly to Israel, the Saudis, and GOP lawmakers in the US.

In addition to the never-ending feud with the Israelis, Tehran is embroiled in a worsening conflict with Riyadh triggered by Saudi Arabia’s execution of prominent Shiite cleric Nimr al-Nimr and subsequent attacks on the Saudi embassy and consulate in Iran. The argument has raised the specter of an all-out conflict between the Sunni and Shiite powers and stoked sectarian discord across the region.

With sanctions lifted, Iran will now have access to some $100 billion in frozen funds and will be able to increase its oil revenue exponentially even as prices remain suppressed.

It’s easy to see why the Saudis and other Gulf Sunni monarchies are nervous. Iran plans to immediately boost output by 500,000 b/d with an additional 500,000 b/d coming online by year end. “The oil ministry, by ordering companies to boost production and oil terminals to be ready, kicked off today the plan to increase Iran’s crude exports by 500,000 barrels,” the official Islamic Republic News Agency reported on Sunday, citing Amir Hossein Zamaninia, deputy oil minister for commerce and international affairs.

“Iran could haul in more than five times as much cash from oil sales by year-end as the lifting of economic sanctions frees the OPEC member to boost crude exports and attract foreign investment needed to rebuild its energy industry,” Bloomberg reports, adding that “the lifting of sanctions means Iran can immediately boost oil revenue to about $2.35 billion a month, based on the country’s estimated current output of 2.7 million barrels a day and oil at $29 a barrel.”

“Iran’s aging oil fields may present some challenges to the pace at
which it can physically raise production,” Deutsche Bank wrote last year, as prior to the signing of the accord. Here’s a bit more color:

Changes to Iran’s sustainable production capacity in the medium term will likely depend partly on the speed and extent to which international oil companies (IOCs) invest in the development of Iran’s oil resources. Currently, 38% of Iran’s oil production originates from three large fields and associated areas which began production decades ago (Gachsaran 1934, Ahwaz 1959, Marun 1965). Of the original resource contained in these three “super-giant” fields, only 23% remains now. 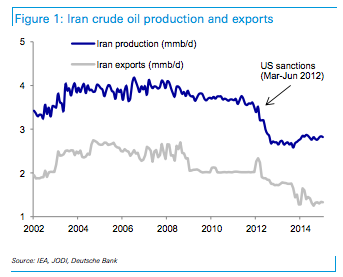 Further development drilling will likely be required in order to maintain production, and secondary techniques such as CO2 or associated gas injection may be required to improve the recovery rate and counteract falling reservoir pressure. Prospects for higher production would be improved by IOC participation. However, foreign investment has lagged not only because of sanctions, but also because of the government’s buyback agreements which are considered unattractive.

On Sunday, Rouhani said the country needs between $30 and $50 billion in foreign investment in order for the country to hit its 8% growth target for the year. “Untapped potential in many industries indicates that domestic demand cannot solely push the economy toward eight per cent growth,” he said. “Attracting foreign investment will be the best way of using the opportunity of sanctions relief to boost the economy and security.”

But according to Israel, it’s all a charade. On Saturday, The Times of Israel said that according to an unnamed “source in Jerusalem”, the first thing Iran will do is send money to Hezbollah. “The implementation of the agreement would have a direct impact on the region, as terror groups Hezbollah and Hamas — both recipients of Iranian largesse — found themselves in possession of new and modern weaponry,” The Times wrote. A statement from PM Netanyahu’s office reads: “Even after the signing of the nuclear agreement, Iran has not abandoned its aspirations to acquire nuclear weapons, and continues to act to destabilize the Middle East and spread terrorism throughout the world while violating its international commitments.”

We wonder whether Netanyahu would say the same thing about the Riyadh, where “acting to destabilize the Mid-East and spread terror throughout the world” is an explicit foreign policy aim.

In any event, Iran just got a $100 billion windfall and will be around $2 billion richer each month by the end of the year. The return of Iranian supply Iran “will have an immediate impact in the spot market” Robin Mills, CEO of consultant Qamar Energy, told Bloomberg by phone. “Putting oil in the market is going to push it down.” “Iran’s additional crude shipments have the potential to further depress prices, perhaps to as low as $25 a barrel,” Nomura’s Gordon Kwan added on Sunday.

As for what effect a richer, more prosperous Iran will have on regional stability, we’d suggest that anything that serves to counter Saudi influence is probably conducive to a more secure environment. Besides, things can’t get much worse in the Mid-East, so it’s hard to see the downside.

Implementing #JCPOA not a detriment to any country. Our friends are happy & our rivals need not worry. We’re no threat to any nation/state.