Last month they were both suspended for 8 years (over a 2 million € payment made by Blatter to Platini), a punishment deemed too harsh by many observers.

“If we had awarded the World Cup in 2022 to the USA, we would not be here” Blatter said afterwards.

The USA is furious that Russia will host the 2018 World Cup, so they sent US attorney general Loretta Lynch, to investigate FIFA. (By the way, Lynch is no saint, having been accused of sparing HSBC criminal charges over money laundering).

It’s a desperate move by the US plutocracy, as it tries to balance its recent loss of prestige by grabbing the ‘world sport’ with both hands. So far, Lynch – together with the FBI and Swiss authorities – has pulled off a coup d’état within FIFA.

Nevertheless, there’s a nasty by product: soccer legend, Platini has ended on the gridiron, awkward interference by US judges that may backfire. Attacking Blatter is fine, he can’t even kick a ball. Attacking Platini is another matter. Soccer fans may irrationally wonder why soccer should be sacrificed to please a country, the US, who since 1994 has done nothing to improve the quality of this sport at home.

Very differently, Russia definitely deserves the World Cup: it has never had one, it’s the biggest country on earth and Russians love soccer, just as people in Qatar do, unlike most white Americans who hate soccer.

Moreover, North American elites boycott soccer by keeping in place a sham league, MLS (Major League Soccer), which is totally disconnected from the rest of the world. Amateurish in fact. A Mickey Mouse league where teams are not even clubs, but brands. Its most grotesque features include a SuperDraft made of college students and a salary cap out of this planet. Attendances are hyped and the MLS’ Commissioner, an NFL guy, once complained there was too much soccer on TV. He hates soccer.

With this background, how dare they pretend to host another World Cup?!

Furthermore, as non-Latinos, Americans can’t stand such a low-scoring game and the elite is only in it for the money, drastic changes in the “laws of the game” may be implemented by the new FIFA regime. Anything could happen, bar – hopefully – allowing the use of hands.

Fans will question this new global soccer police force in a country whose league is a total farce. The martyrdom of Michel ‘le Roi’ Platini will be an own goal for the USA.

Watch out America! You are not defending ‘soccer’, you are killing football. 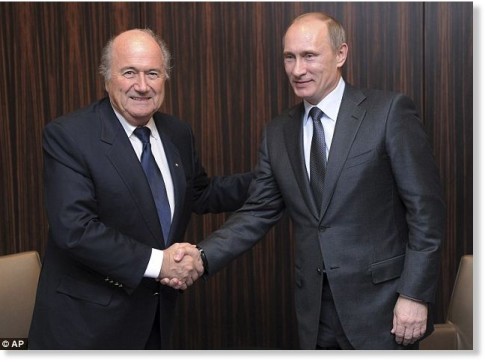