– Temperatures were warmer than today for most of the past 10,000 years:

25 May 10 – The revamped cap-and-trade (control-and-tax) bill that Senators Joseph Lieberman (I-Conn.) and John Kerry (D-Mass.) are trying to foist on the American public is predicated on a flat-out lie.

The control-and-tax proponents would have you believe that our planet has been enduring unprecedented global warming (now coyly referred to as “climate change”), but the facts do not bear that out. Facts. Oh, those damnable facts.

Look at this chart.

Created by Cuffy and Clow in 1997, and based on Greenland ice core records, this chart shows global temperatures for the past 15,000 years.

You’ll see that today’s benign climate is not even close to being the warmest on record.

Temperatures have been warmer than today for almost all of the past 10,000 years.

In fact, if the chart went further back, you’d see that temperatures have been warmer than today for most of geologic history.

I sat just ten feet from Dr. Don Easterbrook, Professor of Geology at Western Washington University as he presented this chart, along with several of his own, at the Heartland Institute’s 4th International Conference on Climate Change in Chicago last week.

“Natural global warming much more intense than modern warming has occurred many times in the geologic past without CO2 change,” said Easterbrook.

The changes occurred rapidly, without any help from humans

“Numerous, abrupt, short-lived warming and cooling episodes much more intense than recent warming/cooling occurred during the late Pleistocene, none of which could have been caused by changes in atmospheric CO2,” said Easterbrook.

“Twice as many people are killed by extreme cold than by extreme heat,” Easterbrook warned.

So let me ask you this. 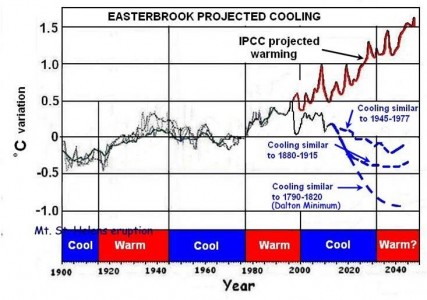