– US EPA Delays Release of Risk Assessments on Harmful Pesticides:

The U.S. Environmental Protection Agency missed its own deadlines for completing risk assessments in 2015 for atrazine, glyphosate and imidacloprid, three highly controversial, toxic and commonly used pesticides. The assessments are crucial to understanding the threats the pesticides pose to animals, people and the environment. 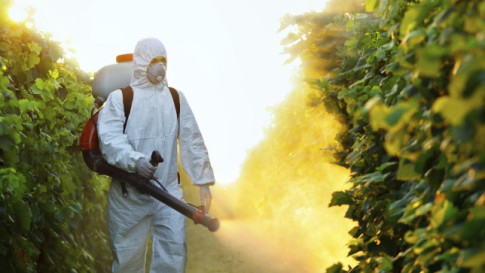 “These risk assessments aren’t just bureaucratic boxes to be checked,” said Lori Ann Burd, environmental health director at the Center for Biological Diversity. “Every day that the EPA delays completing these much-needed reviews is a day that people and wildlife in the United States remain at risk from some of the most toxic chemicals in use today.”

Imidacloprid is one of the most widely used insecticides in the world; seeds treated with this neonicotinoid are planted on millions of acres each year. It is highly toxic to bees and widely implicated in their mass die-offs. Under pressure from the White House to address dramatic bee declines, the EPA committed to completing a pollinator risk assessment for the potent insecticide in 2015, but has not released any such assessment. Imidacloprid and other neonicotinoids are banned in the European Union and across the 150-million-acre national wildlife refuge system. The U.S. Geological Survey has found imidacloprid, which is also highly toxic to birds and aquatic invertebrates, in nearly a quarter of all streams tested in a survey of seven midwestern states.

The EPA also committed to release, but failed to release, risk assessments for glyphosate in 2015. With more than 300 million pounds saturating the U.S. landscape each year, glyphosate is the most commonly used pesticide in the nation. In July the agency announced that it would be releasing ecological and human health risk assessments for glyphosate, recently declared a probable human carcinogen by the World Health Organization and a leading cause of dramatic monarch butterfly declines. But despite promises of a summer release, the agency has not released any new risk assessments.

The EPA also promised to issue a risk assessment for atrazine in early 2015. Atrazine, which is famous for chemically castrating frogs even in tiny doses, is an endocrine disruptor, and likely causes birth defects in people. Up to 80 million pounds are used annually in the United States. Despite the substantial threats atrazine poses to people and wildlife, the EPA has missed its own deadline for evaluating the risk of this highly toxic pesticide.

“The EPA is dragging its feet in analyzing and telling the public about the full dangers of these pesticides,” Burd said. “The public has a right to know, and the longer we’re left in the dark, the greater the danger becomes.”

In addition to failing to complete these three risk assessments, the agency is continuing to fail to comply with the law and consider the effects of pesticides under the Endangered Species Act. Under a landmark settlement reached between the EPA and the Center for Biological Diversity in June, the agency will analyze the impacts of atrazine and glyphosate on 1,500 endangered plants and animals.