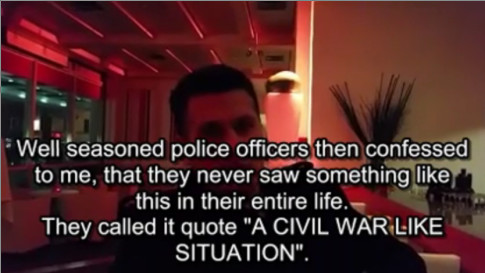 “These people that we welcomed just three months ago with teddy bears and water bottles … started shooting at the cathedral dome and started shooting at police. Well seasoned police officers then confessed to me that they never saw something like this in their entire lives.”

On Tuesday, we documented multiple reports that suggest as many as 1,000 men “of Arab or North African origin” participated in what appeared to be coordinated attacks on German women in Cologne.

“About 90 women have reported being robbed, threatened or sexually molested at New Year celebrations outside [the city’s] cathedral,” Reuters writes, adding that the men were “between 18 and 35” and appeared to be “mostly drunk.”

For her part, Reker has been variously criticized for comments which seem to place some of the blame with the victims. “The Mayor of Cologne said today that women should adopt a “code of conduct” to prevent future assault at a crisis meeting following the sexual attack of women by 1000 men on New Year’s eve,” The Independent reports. “The suggested code of conduct includes maintaining an arm’s length distance from strangers, to stick within your own group, to ask bystanders for help or to intervene as a witness, or to inform the police if you are the victim of such an assault.”

“We need to prevent confusion [among asylum seekers] about what constitutes happy behaviour and what is utterly separate from openness, especially in sexual behaviour,” Reker said, as though this might all be one big misunderstading.

“Ms Merkel where are you? What do you say? This scares us!,” read a sign held by one of hundreds of protesters who gathered outside the cathedral on Tuesday. Here are some images from the demonstrations: 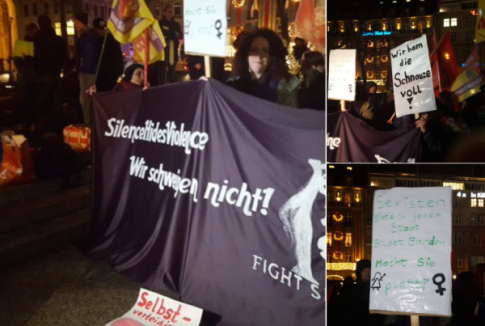 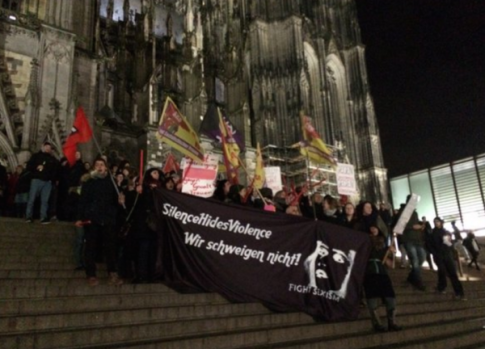 “A spokeswoman for the interior ministry in North-Rhine Westphalia, the state in which Cologne is located, said there were three suspects but declined to give further details,” Dow Jones says, before detailing the alleged attacks: “Police have said the women reported small groups of men attacking them among a crowd of around 1,000 people that had gathered in front of the station to set off fireworks. Women were allegedly cornered by groups of 20 to 30 men, mugged and in some cases sexually assaulted.”

Assaults were also reported in Hamburg and Stuttgart. Authorities are attempting to discern if there’s a connection.

“Mrs Merkel, is Germany ‘colorful and cosmopolitan’ enough for you after the wave of crimes and sexual attacks?,” AfD party leader Frauke Petry tweeted, taunting the iron chancellor’s open-door policy for Mid-East asylum seekers, more than 1.1 million of whom streamed into the country in 2015.

While Integration commissioner Aydan Ozoguz warned Germans to avoid putting migrants under “blanket suspicion” for the attacks, it is precisely these types of incidents that trigger dangerous bouts of scapegoating xenophobia, embolden right-wing political movements, and provoke violent responses from otherwise peaceful people who feel their home is being invaded by hostile foreigners. As we put it on Tuesday, “at this point it is too late for damage control, however, as this has become a case of guilty until proven innocent.”

Below, find a first-hand account of the New Year’s Eve assaults in Cologne from Ivan Jurcevic, a hotel club bouncer who was on the job (literally) as the melee unfolded. “These people that we welcomed just three months ago with teddy bears and water bottles … started shooting at the cathedral dome and started shooting at police,” Jurcevic says. “Well seasoned police officers then confessed to me that they never saw something like this in their entire lives,” he adds. “They called it a ‘civil war like situation.'”

On Wednesday, Merkel renewed her call for open borders despite the violence.

“Right now we’re seeing a very differentiated positioning among EU member states,” the Chancellor told reporters at meeting of her CSU Bavarian sister party. “It’s important to me that we have a noticeable reduction in refugee numbers, but at the same time preserve the freedom of movement within the European Union, which is an engine of economic development and prosperity — and nobody is more reliant on it than Germany.”