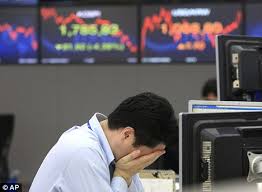 – Happy New Year: Global Stocks Crash After China Is Halted Limit Down In Worst Start To Year In History:

It all started off relatively well: oil and US equity futures were buoyant on hopes Iran and Saudi Arabia would break out in a bloody conflict any minute boosting the net worth of shareholders of the military industrial complex, and then, out of nowhere, like a depressed China in a bull shop, the “mainland” crashed the party following a terrible manufacturing PMI report, which sent Chinese stocks sliding slowly at first, then very fast. 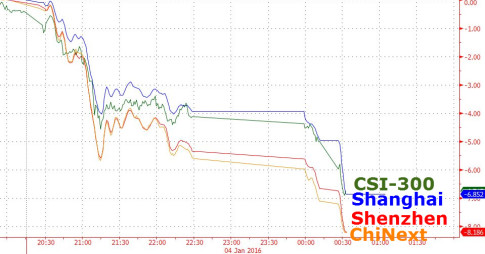 So fast, in fact that as we reported last night, on the very first day China’s new circuit breaker mechanism became operational, it was promptly tested out and led to a marketwide trading halt at 1:34pm local after the Shanghai Composite crashed by the 7% limit. Earlier trading was halted for 15 minutes after the CSI Index – which comprises large capitalization companies listed in Shanghai and Shenzhen – dropped 5 percent.  This was the worst start of trading in Chinese stock market in history, and oddly enough, was something that not a single pundit predicted as part of their oh so very entertaining year-end forecasts. 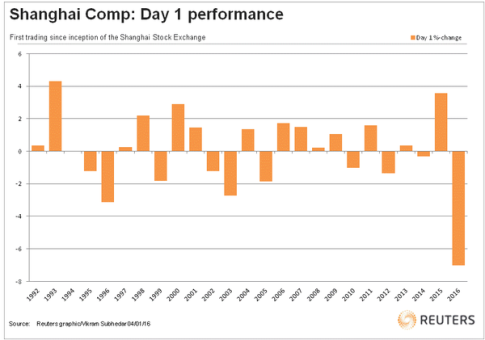 And just in case crashing stock markets was not enough, the Chinese Yuan likewise crashed by over 0.6%, sliding north of 6.5325 at 4:50 local time after trading hours were extended and when the traditional PBOC intervention to calm the selloff did not appear in late day trading. The USDCNH was up to a whopping 6.6272 as China’s devaluation accelerates with every passing day.

Slammed by the risk off sentiment, the main global carry trade currency, the Japanese yen, rose against all 31 of its major peers as investors sought the safest assets after China factory data highlighted weakness in the world’s second-largest economy. 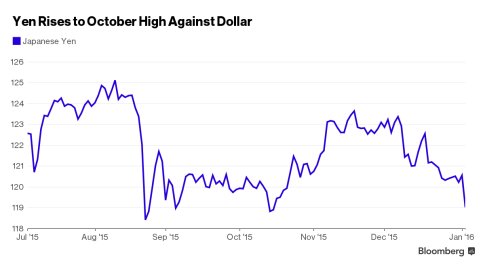 As a result of the Chinese collapse on day one, global equities dropped after the Chinese market fireworks, as well as geopolitical fears after Saudi Arabia severed ties with Iran, spurring a flight to haven assets. The MSCI Asia Pacific Index sank as much as 2.2 percent, the most since Sept.29. The Stoxx Europe 600 Index fell as much as 2.8 percent after gaining 7 percent in 2015. Last year the MSCI All Country World Index fell for the first year in four.

“It’s a nasty start for the year,” Peter Kinsella, a senior currency strategist at Commerzbank AG in London, tolf Bloomberg. “It might be the New Year, but old problems remain. Chinese growth concerns have not gone away.”

And then the Developing Nations were also routed: as Bloomberg points out, the slump in DMs harks back to financial turmoil in August that was fueled by China’s devaluation of the yuan. It shows the pace of growth in the world’s second-largest economy will remain key for markets in 2016 after a slowdown last year dragged emerging markets lower and sparked a slump in commodities prices.

So as we start the new year, Dow futures are down 300 points, the E-mini is down 34 points and just barely holding on to 2000, Asia is tumbling, Europe is crashing, and gold is up. At least  oil is so far green but just barely, up 1.5% at last check.

In short, Happy New Year from the Federal Reserve, which is hiking because the “economy is strong”!

A more detailed look at regional markets, shows that the bloodbath started in Asia where equity markets begin the year negative following the losses on Wall St. in its last trading day of 2015, while further disappointing data from China added to the region’s risk averse tone. Nikkei 225 (-3.1%) declined by over 3%, while Shanghai Comp (-6.85%) triggered the circuit breaker. Hang Seng (-2.8%) was also weighed on heavily in the wake of the poor China PMI data, where the official figure contracted for a 5th month. As a guide, a newly imposed Chinese circuit breaker means that if the CSI 300 falls 5% all Chinese equities will be halted for 15 minutes and then closed for the session if losses extend to 7%. Losses in the ASX 200 (-0.5%) have been capped by gains in the energy sector on increased tensions between Saudi and Iran. 10yr JGBs traded marginally higher as safe-havens were supported amid losses in riskier assets, although gains have been capped as participants are side-lined ahead of tomorrow’s 10yr auction, while the BoJ were also relatively conservative in today’s open market operation.

In Europe, 2016 also has got off to a somewhat rocky start, with Euro Stoxx lower by around 2.8% as risk off sentiment is rife around financial markets. Much of the dampened sentiment this morning stems from China overnight, whereby newly imposed circuit breakers were triggered for Chinese equities in the wake of disappointing domestic manufacturing PMI data, while also of note the regional German CPIs have printed generally lower than previous. Given the focus on China, materials are the notable underperformer on a sector breakdown.

In terms of fixed income, Bunds have notably benefitted from the risk off sentiment, opening higher at the Eurex open and trading above the 158.50 level throughout the European morning. Bunds lead the way higher in terms of Europe, with the spread against most of their European counterparts wider this morning.

In FX, the JPY is the notable gainer in a flight to safety bid, while the USD has seen mixed flow to the benefit of the likes of EUR and GBP later in the session. The yen touched 118.70 per dollar, the strongest level since Oct. 15 and the Swiss franc was also among the biggest gainers among haven currencies. Australia’s dollar slid to 72.13 U.S. cents, down 1 percent from Dec. 31, while New Zealand’s currency was 0.9 percent weaker.

The Bloomberg Dollar Spot Index, which tracks the greenback against 10 major peers, slipped 0.2 percent. The gauge climbed 9 percent in 2015, a third straight gain.  Elsewhere NOK is also a notable underperformer today, reaching 1 year lows against the EUR and 23 year lows against the SEK, however given that the energy complex is relatively unchanged, it appears to be more technically driven.

Commodities have too been in flux, with spot gold (USD +11.90) outperforming amid the risk off sentiment, while Brent and WTI futures trade in mild positive territory, however shrugging off the latest escalation in tensions between Saudi Arabia and Iran. Commentators have suggested that the impact may be somewhat limited, with both countries eager not to cut output. U.S. crude added 0.9 percent after Saudi Arabia’s embassy in Tehran was attacked to protest the Saudis’ execution of a prominent Shiite cleric.

Oil last week capped the biggest two-year loss on record amid speculation a global glut will be prolonged as U.S. crude stockpiles expanded at a record rate and the Organization of Petroleum Exporting Countries abandoned output limits.

Base metals fell, with nickel and zinc sliding more than 2.5 percent on the Chinese manufacturing data. Copper fell 2.1 percent.

It’s straight to the overnight session in Asia where bourses have started the New Year very much on the back foot as softer than expected manufacturing data in China and escalating geopolitical concerns in the Middle East has helped fuel steep declines across the board. In China the Shanghai Comp is currently down -3.94% as we type after the non-official Caixin manufacturing PMI printed at 48.2 last month, a decline of 0.4pts and well below expectations of 48.9. It also marked the 10th straight sub-50 reading.

Meanwhile overnight headlines are also being dominated by the news that Saudi Arabia has severed its diplomatic ties with Iran. This comes after Saudi Arabia’s embassy was attacked in Tehran following the protests over the execution of a Shia cleric by the Saudi’s. Along with the China data that’s sent bourses down with the Nikkei (-2.80%), Hang Seng (-2.31%), Kospi (-1.62%) and ASX (-0.55%) all lower while S&P 500 futures are currently down over half a percent. Asia and Australia credit indices are both a couple of basis points wider although those geopolitical concerns have helped fuel a bid for Oil where both WTI and Brent are up over 2%.

Recapping briefly how markets closed out the final trading day of 2015 on Thursday last week. Equity markets closed on a sour note with losses for bourses on both sides of the pond. Indeed the S&P 500 finished -0.94% which, excluding dividends, meant the index closed in negative territory for the year (-0.73%). The Dow (-1.02%) and Nasdaq (-1.15%) closed lower also while it was a similar story in Europe as we saw the Stoxx 600 finish the session down – 0.51%. These falls came despite a better finish for the Oil complex where both WTI (+1.20%) and Brent (+2.25%) nudged back above the $37 level, although the same couldn’t be said for metals where Aluminum (-1.37%) and Copper (-0.63%) in particular failed to make any ground.

The last batch of economic data for the year was generally disappointing. Of particular note, the December Chicago PMI plunged 5.8pts to a below market 42.9 (vs. 50.0 expected) which was the lowest reading since July 2009. The ISM Milwaukee also printed sub-50 as expected at 48.5, although this was up over 3pts from the November reading while on the employment front there was a bigger than expected rise in the latest initial jobless claims print to 287k, up 20k from the previous print. The data had minimal impact on the rates market with US 10y yields closing out the year at 2.270% (down 2.5bps on the day) and just 10bps above where they closed 2014.

Meanwhile, Spain has been in focus over the weekend with the news from the Catalonia region that Acting President Artur Mas has failed in his attempt to win sufficient support from the anti-capitalist CUP party. The latest twist raises some uncertainty for the region now with Bloomberg noting that Mas’s Junts pel Si has until January 9th to establish a new government or instead run the risk of facing fresh elections which would be called in March. This of course is in addition to the overall political uncertainty in Spain itself after the inconclusive recent general election on December 20th.