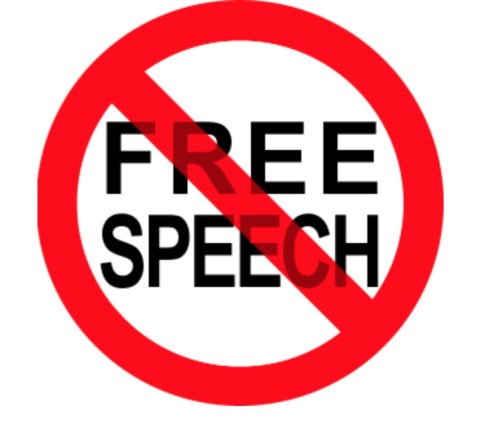 The NYT article notes that “in response to the Islamic State’s success in grooming jihadists over the Internet, some legal scholars are asking whether it is time to reconsider” the long-standing “constitutional line” that “freedom of speech may not be curbed unless it poses a ‘clear and present danger’ — an actual, imminent threat, not the mere advocacy of harmful acts or ideas.”

The NYT cites two recent articles, one in Bloomberg by long-time Obama adviser Cass Sunstein and the other in Slate by Law Professor Eric Posner, that suggested limitations on the First Amendment in order to fight ISIS. It describes growing calls to ban the YouTube lectures and sermons of Anwar al-Awlaki, the American cleric whom the U.S. assassinated by drone in 2011 (and then, two weeks later, killed his 16-year-old American son). It also notes that the desire to restrict the internet as a means of fighting ISIS has seeped into the leadership of both parties: Donald Trump said the “internet should be closed up” to ISIS, while “Hillary Clinton said the government should work with host companies to shut jihadist websites and chat rooms,” a plan that would be unconstitutional “if the government exerted pressure on private firms to cooperate in censorship.”

All of these proposals take direct aim at a core constitutional principle that for decades has defined the First Amendment’s free speech protections. That speech cannot be banned even if it constitutes advocacy of violence has a long history in the U.S., but was firmly entrenched in the Supreme Court’s unanimous 1969 decision in Brandenburg v. Ohio, about which I’ve written many times. The Brandenburg ruling “overturned the criminal conviction of a Ku Klux Klan leader who had threatened violence against political officials in a speech.  Even more important was the law which the Brandenburg court invalided as unconstitutional:

The KKK leader in Brandenburg was convicted under an Ohio statute that made it a crime to “advocate . . . the duty, necessity, or propriety of crime, sabotage, violence, or unlawful methods of terrorism as a means of accomplishing industrial or political reform” and/or to “voluntarily assemble with any society, group, or assemblage of persons formed to teach or advocate the doctrines of criminal syndicalism.”  The Court struck down the statute on the ground that it “purports to punish mere advocacy” and thus “sweeps within its condemnation speech which our Constitution has immunized from governmental control.”  The Court ruled that “except where such advocacy is directed to inciting or producing imminent lawless action” — meaning conduct such as standing outside someone’s house with an angry mob and urging them to burn the house down that moment — “the constitutional guarantees of free speech and free press do not permit a State to forbid or proscribe advocacy of the use of force” (emphasis added).

The First Amendment bars the U.S. Government from banning or punishing speech even if that speech advocates “the duty, necessity, or propriety of unlawful methods of terrorism.” And that’s exactly how it should be.

There are millions of people in the world who believe and argue that the U.S. has been supporting tyranny and bringing violence to predominantly Muslim countries for decades as a means of dominating that region, and that return violence is not only justifiable but necessary to stop it (just as there are millions of westerners who believe and argue that they must bring more violence to the countries of that region). In particular, it’s astonishing to watch Americans – whose favorite political debate is deciding which country should be bombed next or which individuals should be next assassinated – propose changes to the First Amendment to make it a crime for others to justify (not engage in, but merely justify) the use of violence in what they argue is valid self-defense.

He is right to point this out as hypocrisy of the highest order.

Above all, this has been the core lesson of the “War on Terror”: the greatest threats to western countries have come from those seeking to limit rights in the name of fighting terrorism, not the terrorists themselves.

For the reasons I set forth here, no human beings or human institutions should ever be trusted to promulgate lists of Prohibited Ideas and Viewpoints. But even if you are someone who yearns for such lists, it should be immediately obvious that your dream of prohibiting ideas is utterly futile, particularly in the digital age.

But there is a difference between violating constitutional rights, as those cases have done, and formally restricting them, as people like Sunstein and Posner are now agitating to do. Guaranteeing free speech rights is one of the things that the U.S., relative to the rest of the world, still does well (not perfectly, but well). It is not an exaggeration to say that the people now plotting how to exploit terrorism fears in order to formally restrict rights of free expression themselves pose a clear and present danger to the U.S. (Sunstein previously proposed that the U.S. Government “cognitively infiltrate” the internet by sending teams of covert agents into “chat rooms, online social networks, or even real-space groups” to discredit what he regards as false conspiracy theories, as well as pay so-called “independent” credible voices to bolster the Government’s messaging). And as far as “hate speech” goes: there are few things more “hateful” than wanting to imprison one’s fellow citizens for expressing prohibited political ideas.

Although Greenwald mentions some of the extremely illiberal views of Cass Sunstein in his article, he fails to make clear the extent to which both Eric Posner and Sunstein are dyed in the wool veterans of the anti-free speech movement. This is important because both Sunstein and Posner are attempting to portray themselves as fierce warriors in the fight against ISIS. Men who would reluctantly rescind some free speech rights in an existential battle for survival, when in reality, they are merely coopting widespread fears over terrorism in order to propagate their long standing derision for the First Amendment.

For example, in 2012 I published a post discussing a piece written by Posner titled, Here We Go…Slate Magazine Bashes the First Amendment, well before ISIS came onto the scene. Here’s an excerpt:

This article is so heinous I almost couldn’t believe what I was reading. Better yet, the author, Eric Posner, is a Professor at the University of Chicago Law School. So let me get this straight, a guy who is teaching law to our future lawyers is arguing against The First Amendment of the Constitution, which is the single most important document in U.S. history upon which all laws are supposed to be written!

Wow. This guy isn’t just saying people should be cautious about what they say, he seems to really have a deep dislike for free speech.  Here is the winning line in his absurd piece:

Even other Western nations take a more circumspect position on freedom of expression than we do, realizing that often free speech must yield to other values and the need for order.

So back in 2012 ,it was about “the need for order.” Three years later, in 2015, it’s suddenly all about fighting ISIS terrorists.

Of course, this is just the beginning when it comes to Poser. Ken White over at Popehat details this man’s history of anti-free speech activism in the must read post: Eric Posner: The First Amendment’s Nemesis.

Only under the Obama Presidency, in which every appointment, minor or major, is handed only to the most corrupt, devious crony to be found, can a man like Cass Sunstein be appointed to serve on the NSA oversight panel.  Cass is a noted propagandist, who has advocated that government agents should infiltrate groups and discussions that push “conspiracy theories” (read my article on how to know if you are a conspiracy theorist) in order to delegitimize them. But don’t take my word for it. The Washington Post wrote the following a couple of days ago:

The Obama administration is reportedly proposing Cass Sunstein as a member of a panel to review the surveillance practices of the National Security Agency (NSA), among other former White House and intelligence staffers. Sunstein was the head of the White House’s Office of Information and Regulatory Affairs until last year, when he returned to teaching at Harvard Law School.

While at Harvard in 2008, Sunstein co-authored a working paper that suggests government agents or their allies “cognitively infiltrate” conspiracy theorist groups by joining ”chat rooms, online social networks or even real-space groups” and influencing the conversation.

The paper also suggests that the government “formally hire credible private parties to engage in counterspeech.” That sounds an awful lot like the 50 Cent Party of online commentators who are paid per comment by the Chinese communist party to sway public opinion. 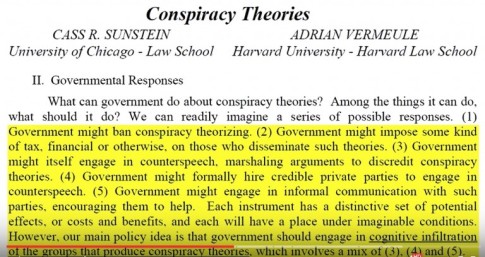 Finally, I’d like to end the post with the classic video in which Luke Rudkowski corners Cass Sunstein as he tries to squirm away like the unconstitutional vampire that he is.

From Protesting Vietnam to Demanding “Safe Spaces” – What Happened to America’s College Kids?