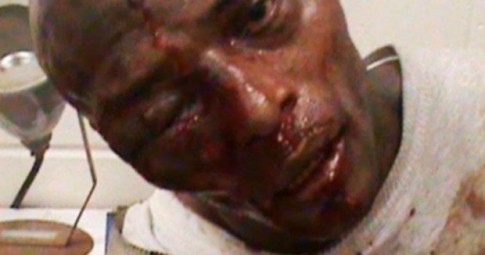 – Muslim Man Tries To Molest Random Teen Girl & Ended Up Like This:

A Muslim man recently decided to have himself a bit of forced sex and grabbed a random 13-year-old girl off the street in order to do so. Unfortunately for him, he didn’t realize the mistake he’d just made, but he’d soon get the message loud and clear.

The incident took place in Sicily, Italy, when a Muslim foreigner from Senegal, West Africa decided that he was in the mood for rape. In order to satisfy that apparently insistent craving, he grabbed the first little girl he saw and tried to take her away.

According to reports, the girl was waiting at the bus stop at the time and tried to push the Muslim man away, but this only angered him. He then “grabbed her violently by the arm and tried to pull her away,” but there was just one small problem – the girl’s uncle was across the street at a bar.

Witnesses indicate that the girl’s relative came storming across the street with another man. Without saying a single word, they immediately began to strike the man in the face until he could no longer stand. Unfortunately for the Muslim would-be rapist, they weren’t done there.

As the Islamic foreigner lay on the ground bleeding and in pain, the two men continued to assault him by kicking him in the groin. The uncle then retrieved the girl and brought her back inside the bar, where he and the bartender attempted to calm her down.

When the uncle turned around, he was a bit more than surprised to see the Muslim man calling the authorities for help. Soon, first responders took the man to the hospital while he was under arrest. Police even managed to arrest the girl’s uncle while they were at it.

Within just four short hours though, the protective uncle was released after being charged with willful personal injury. The Muslim, on the other hand, still remains in custody.

Not only do Muslims immigrants come to Western countries for the great opportunities, but once here, they show complete and utter disregard for our way of living and our laws. However, when things go wrong for them, they quickly pick up a phone and call police in hopes they’ll be there at a moment’s notice. The hypocrisy couldn’t possibly be any more apparent.