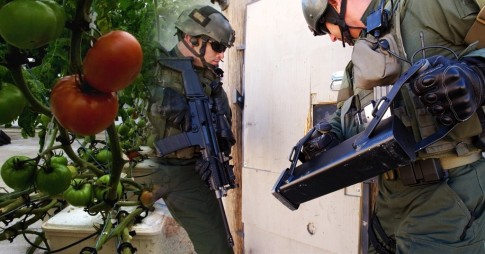 When a Kansas SWAT team raided the house of Robert and Addie Harty, as well as their 7-year-old daughter and their 13-year-old son, they claimed it was all because of purchases of gardening supplies.

The April 2012 raid of the couple, both former CIA analysts, began with pounding on their front door, and continued with Harte laying face down, with guns pointed at him.

The SWAT team said the former CIA analyst was involved in “a major marijuana growing operation” because he had purchased supplies for growing hydroponic tomatoes for a school project for his children.

How did they get tipped off to this “crime”?

A state trooper was parked in the store parking lot, collecting the license plate numbers of customers, then compile them into a spreadsheet, and sending it to the local sheriff’s departments for “further investigation.”

The Johnson County Sheriff’s Department investigated the Hartes as part of what they called “Operation Constant Gardener.”

Deputies repeatedly found “saturated plant material” in their trash, which they searched without a warrant.

From this, they obtained a search warrant.

The Washington Post reports the following about laboratory tests of the soil samples, which came back negative but was nevertheless used to obtain a search warrant.

Lab tests would later reveal that the “saturated plant material” was actually loose-leaf tea, which Addie Harte drinks on a regular basis. Why did the field tests come up positive for pot? As I wrote back in February, it’s almost as if these tests come up positive whenever the police need them to. A partial list of substances that the tests have mistaken for illegal drugs would include sage, chocolate chip cookies, motor oil, spearmint, soap, tortilla dough, deodorant, billiard’s chalk, patchouli, flour, eucalyptus, breath mints, Jolly Ranchers and vitamins. Back in 2009, the Marijuana Policy Project demonstrated how easily the tests could be manipulated to generate positive results:

As a lab-coated and rubber glove wearing researcher from the South Carolina Center for Biotechnology dumped a sample of oregano into a field test kit, Mintwood Media’s Adam Eidinger produced a positive test result for cocaine with another kit simply by exposing it to the atmosphere. “This is just air,” Eidinger said, opening up a test and waving it as the reagent turned orange, indicating a positive result. (See the YouTube video here.)

The testing done at the press conference replicated that done earlier by the researchers, who found that a surprisingly large number of common substances generated false positive results for the presence of drugs. “While testing the specificity of the KN Reagent test kits with 42 non-marijuana substances, I observed that 70% of these tests rendered a false positive,” said Dr. Omar Bagasra, director of the Center for Biotechnology, who conducted the experiments.

All of this comes as part of a project called False Positives Equal False Justice. The research has been conducted by forensics expert John Kelly in collaboration with former FBI chief scientist and narcotics officer Dr. Frederick Whitehurst, according to the Post.

They discovered that “a drug testing regime of fraudulent forensics used by police, prosecutors, and judges which abrogates every American’s constitutional rights.”

This is the same brand of test kit used in the Harte case. Despite the fact that the sheriff’s department didn’t begin investigating the Hartes until at least seven months after their allegedly suspicious activity (again — shopping at a gardening store) first attracted the notice of police, the sheriff’s department couldn’t wait for the more accurate laboratory tests to confirm that the “saturated plant material” was marijuana before sending a SWAT team into the Harte home. Doing so would have jeopardized the news hook of tying the raids to 4/20. It took all of 10 days to complete those lab tests. The lab not only concluded that substance wasn’t pot, the analysts added, “It does not look anything like marijuana leaves or stems.”

The Sheriff’s Department held a press conference that fed the media lies about the raids. The media uncritically said that the raids had turned up drug activity “in good neighborhoods.”

But the Hartes were cleared of any wrongdoing. They eventually had to hire an attorney to force a judge to order the sheriff to release information about the raid.

But recently, U.S. District Court Judge John W. Lungstrum dismissed every one of the Hartes’s claims, saying that the police had probable cause for the search.

They added that the brutality executed during the raid, did not constitute excessive force, and that the Hartes had not been defamed by the raid or related publicity from media lies.

The judge additionally said the “police were under no obligation to know that drug testing field kits are inaccurate, nor were they obligated to wait for the more accurate lab tests before conducting the SWAT raid. The only way they’d have a claim would be if they could show that the police lied about the results, deliberately manipulated the tests or showed a reckless disregard for the truth — and he ruled that the Hartes had failed to do so.”

What do you think? Is the judge right? Or did the family – former CIA analysts – have their rights violated?