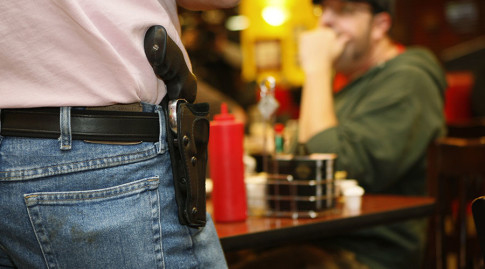 It’s a prohibition that has lasted since the end of the Civil War, but it will finally come to an end on New Year’s Day: Texas will become the 45th state in the Union to allow the open carry of handguns.

On January 1, in accordance with a law passed in June, the Texas Concealed Handgun License (CHL) will cease to be issued. It will be replaced by the License to Carry (LTC) as residents of the Lone Star State renew or apply to carry a weapon. Permits are initially good for four years, and can be renewed for five-year periods afterwards, according to the Texas Department of Public Safety.

Nearly 914,000 Texans ‒ or almost 4 percent of the state’s 27 million residents ‒ have a current license to concealed carry firearms, according to Forth Worth Star-Telegram, citing the Texas DPS. That’s up from 826,000 in 2014. The requirements to obtain the LTC are the same as under the current permit: The applicant must be at least 21, must have clean criminal and psychological records, complete a training course and pass a shooting test. The guns must be carried in a shoulder or belt holster.

The state already allows the open carrying of rifles and shotguns, and will become the largest state to allow some version of open carry, AP reported. California, Florida, Illinois, New York and South Carolina still ban the practice.

The final bill was stripped of a provision ‒ introduced by Second Amendment activists and Democrats ‒ that would have prevented law enforcement officials from asking residents openly carrying a handgun for their license after police unions lobbied against its inclusion. However, many departments have said that they won’t ask to look at the permits of all Texans who decide to open carry, so as to avoid harassment lawsuits. Instead, police will usually assume that those bearing arms have the proper paperwork.

“People will drive without a license,” Charley Wilkison, executive director of the Combined Law Enforcement Associations of Texas ‒ the state’s largest police union ‒ told AP. “And we can sure count on them to carry a weapon without training or license.”

Although open carrying of handguns in Texas has been banned since 1865, law enforcement says that not much will change come the new year, noting that concealed carry has been the law for two decades.

“You never knew about it before and it didn’t give you heartburn,” Shannon Edmonds, a staff attorney for the Austin-based Texas District and County Attorneys Association, told the Fort Worth Star-Telegram. “What we are hearing from other states is that it’s not that big a deal. “You’ll see people parading around with their guns this January 1, but by January 1, 2017, there aren’t going to be any parades, no one is going to care about it and it’s going to be yesterday’s news.”

Private businesses and other establishments have the option to ban open carry on their premises, according to the law. Restaurants and other places that sell alcohol have wrestled with the question of how to proceed in the new year.

“We’re primarily a family environment in terms of our restaurant. And so we decided it’s probably best not to allow open carry,” Al Flores, counsel for Gringo’s, a chain of 14 restaurants, mainly in the Houston area and surrounding counties, told the Wall Street Journal. “We just felt that knowing our customers, allowing someone to walk in openly carrying a weapon, it would make them feel a little uncomfortable.”

Gringo’s will post signs in English and Spanish, warning customers about the open-carry prohibition. A concealed gun would still be permitted, he said.

So far three grocery store chains have opted out of allowing open carry: Whole Foods, Safeway and Texas-based H-E-B, which says its ban is in accordance with state regulations on selling alcohol.

“As a retailer of alcohol, long guns and unlicensed guns are prohibited on our property under the Texas Alcohol and Beverage Commission rules,” the grocer said in a statement. “H-E-B maintains the same policy we have for years, only concealed licensed handguns are allowed on our property.”

“I don’t know why in a grocery store I would need to open carry,” Leigh Cutter, a San Antonio mother and concealed handgun owner, told KENS. “As long as I have it on my person, I would be just fine.”

Others plan to keep their weapons concealed regardless of the new law.

“I want all the benefits and advantages I can have if I’m ever in a confrontation,” Curtis Van Liew, a concealed handgun license instructor, told the Fort Worth Star-Telegram. “The biggest one is the element of surprise.”

Some places, like First Baptist Church of Arlington, have opted to allow Texans to open carry.

“We decided it was best to allow responsible people to do this if they choose,” Senior Pastor Dennis Wiles told the Wall Street Journal. “We will probably assess the situation in a couple of months to see how it goes. When it comes to a church, I don’t think we’re going to see that much difference.”