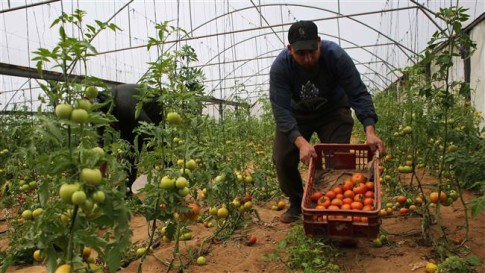 Israeli planes have reportedly sprayed chemical substances on farmlands across the besieged Gaza Strip, killing off the crops in the already impoverished Palestinian territory.

“Several farmers informed us that Israeli planes had sprayed their lands with pesticides,” Wael Thabet, head of the plant protection department at Gaza Agriculture Ministry, said on Wednesday.

The outskirts of al-Qarara town north of Khan Yunis, and Wadi as-Salqa agricultural town south of Deir al-Balah are the affected areas.

Thabet said an estimated 371 acres of farming land in central Gaza and 50 acres of land in eastern Khan Younis have been affected.

Saleh al-Najjar, a farmer from al-Qarara, said he lost some 7.4 acres of spinach and pea crops as a result of the spraying.

Another farmer, Wael al-Shami, said he lost crops of parsley and beans, which he had planted near the town.

The continuing Israeli blockade of the Gaza Strip is putting the lives of people at risk, taking a heavy toll on the enclave’s agriculture sector.

Farmers are struggling to meet growing demands of 1.8 million Gazans who are living in the tight grip of the Israeli siege. They face many challenges due to shortages in farming equipment and more importantly, approved pesticides.

Due to the decline in production and Israel’s ban on the entry of basic commodities, Gazan farmers have resorted to the use of banned chemical substances to maximize crop yield. This poses a serious health hazard to both farmers and their consumers.

Meanwhile, the United Nations has expressed concerns over the excessive use of toxic pesticides by Gaza farmers.

Many medical experts in Gaza are worried about a rise in the number of registered Gazan cancer patients, especially in the agricultural areas.

They warn that children are more susceptible to diseases such as leukemia than adults in such regions.

Gaza Strip has been under Israel’s blockade since June 2007. The crippling siege has caused a decline in living standards as well as unprecedented levels of unemployment and unrelenting poverty.