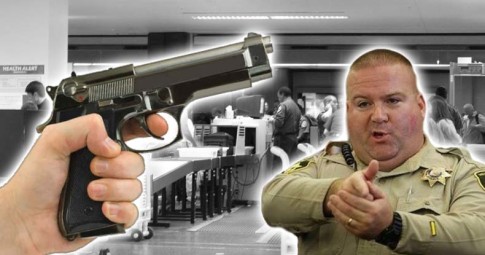 Des Moines, IA — Imagine for a moment that you were open carrying a pistol in a public space and all of the sudden, you accidentally squeeze off a round.

There are two possible scenarios that would take place; the first one being that police return fire and you are killed. The second, less lethal result would be your inevitable arrest and charges of public endangerment, unlawful discharge, illegal use of a firearm, assault with a deadly weapon, terrorism, or a myriad of other charges associated with sending a deadly projectile hurling through walls and near the heads of innocent people. You would immediately be facing fines, jail time, probation, and firearms restrictions.

However, if you are a government agent who’s trusted with carrying a deadly weapon into places others cannot, you needn’t worry about any of those repercussions.

This week, in the Des Moines Airport, a police officer proved that he could fire his pistol in a weapons-restricted area and not be killed nor arrested.

On Wednesday, officer Brady Pratt of the Des Moines police department was “practicing his quick draw skills” and “unknowingly had his finger on the trigger and discharged a round into the ceiling tile,” according to a police report.

The deadly mistake sent a round travelling through a wall, into a ceiling tile and into another hallway where it finally stopped in the tile. Out of sheer luck, no one was killed or injured.

Instead of being killed or arrested, Pratt simply notified a supervisor who in turn promised an investigation.

“Discipline is always a possibility when [police officers] are negligent. The level will be determined by the circumstances. There will be a very thorough review,” said Sgt. Paul Parizek, Des Moines Police Department spokesman.

In 2000, a decision by the US Court of Appeals for the Second Circuit condoned the ability of police departments to discriminate against applicants who were too smart.

We are now witnessing the imminent results of such absurd hiring practices.

Nor does a smart person “practice his quick draw skills” in a $#%@# airport!