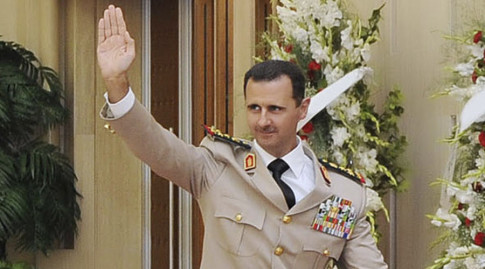 – US military provided Assad with intel on extremists via Russia, Israel & Germany – report:

The Pentagon’s Joint Chiefs of Staff has been indirectly providing Syrian military with intelligence on Islamic extremists fearing the Obama administration’s agenda to oust Bashar Assad will engender total chaos in Syria.

A new investigation in the London Review of Books by renowned American journalist Seymour M. Hersh exposes the divide between the US top brass and the politicians in the White House when it comes to dealing with Islamic extremists in Syria and Iraq.

It seems the US JCS isn’t enthusiastic about Obama’s “Assad must go” maxima, opting to provide Damascus with intelligence and analytics on the jihadists instead. This is, however, done indirectly, an unidentified former senior adviser to the Joint Chiefs told Hersh.

In summer 2013, a highly classified report prepared by the Defense Intelligence Agency (DIA) and the JCS assessed that ousting President Assad would create chaos in the country, making it an easy prey for Islamic extremists.

By that time, the CIA had been delivering weapons from Libyan arms depots to Syria via Turkey for over a year. This began soon after the assassination of Libyan strongman Muammar Gaddafi, writes Hersh.

The arms were handed to any group opposing Assad’s military, including Jabhat al-Nusra and Islamic State. The so-called ‘moderate rebels’ had “evaporated and the Free Syrian Army was a rump group stationed at an airbase in Turkey,” the source told the journalist. The US military assessment was realistic: moderate opposition to Assad is a myth and the US was arming Islamic extremists.

The DIA’s former head, Lieutenant General Michael Flynn, recalled the report “got enormous pushback” from the Obama administration, which “did not want to hear the truth.”

“If the American public saw the intelligence we were producing daily, at the most sensitive level, they would go ballistic,” Flynn said.

“The JCS believed that Assad should not be replaced by fundamentalists,” the former JCS adviser told Hersh.

Under the circumstances, the US military realized that a direct challenge to Obama’s policy was doomed to failure, so the Pentagon’s, General Martin Dempsey, allegedly decided to oppose the extremists without using “political channels.”

To fight the common enemy of Jabhat al-Nusra and Islamic State, US intelligence was provided to third party militaries, such as Germany, Israel and Russia.

“It was clear that Assad needed better tactical intelligence and operational advice,” the former JCS adviser told Hersh, noting, “Obama didn’t know, but Obama doesn’t know what the JCS does in every circumstance and that’s true of all presidents.”

The adviser stressed there was no direct contact between the US and the Syrian military.

“It was a military to military thing, and not some sort of a sinister Joint Chiefs’ plot to go around Obama and support Assad,” the source said. “If Assad remains in power… it’s because he was smart enough to use the intelligence and sound tactical advice we provided to others.”

With the full knowledge of Syrian intelligence, the US embassy in Syria had spent millions of dollars over a long period financing dissidents aiming to destabilize the country. These efforts took place while President Bashar Assad was trying to establish friendly relations with Washington.

Following the 9/11 terror attack, “Bashar was, for years, extremely helpful to us while, in my view, we were churlish in return, and clumsy in our use of the gold he gave us,” a longtime consultant to America’s intelligence community told Hersh.

By 2002, Assad had turned over large amounts of information regarding the Muslim Brotherhood’s activities in Syria and Germany. In the same year, Syrian intelligence foiled an Al-Qaeda attack on the headquarters of the US Navy’s Fifth Fleet in Bahrain.

Hersh alleges that at the time a Damascus prison was used for torturing terrorist suspects held captive by the CIA, as was happening in other countries involved in its secret rendition program.

However, despite Assad’s generous support the White House’s attitude towards the Syrian leader remains the same – negative.

The American journalist alleges that, in return for the US Joint Chiefs intelligence-sharing arrangement, Damascus was to accept four conditions: restrain Hezbollah from attacking Israel; renew dialogue with Israel over the Golan Heights; agree to accept “Russian and other outside military advisers,” and promise to hold open elections after the war.

A source in Moscow told Hersh the Israeli’s refused to discuss the Golan Heights issue, saying: “Assad is finished.”

Allegedly, Assad had attempted to have Saudi Prince Bandar bin Sultan toppled, the head of Saudi Arabian intelligence and national security affairs. Naturally, the US turned down demands to get rid of a man who had spent over 20 years as the Saudi’s Washington ambassador.

Seymour M. Hersh says the US military’s success in providing Damascus with quality intelligence and curbing terrorist potential by supplying outdated arms from Turkish depots via CIA routes was undermined by the actions of Saudi Arabia, Qatar and Turkey. These countries armed Islamic extremists with modern weapons, which gave them the upper hand in subduing the Syrian Army and resulted in huge territorial losses by 2013.

While the Saudis allegedly remained negotiable, the Turkish government and President Recep Tayyip Erdogan were playing another game.

After supporting Jabhat al-Nusra for years, the JCS adviser said the Erdogan government is “now doing the same for Islamic State” in order to disrupt the balance in the Middle East.

The Turkish government has refused to halt the flow of foreign jihadists going through Turkey because President Erdogan “is dreaming big – of restoring the Ottoman Empire – and he did not realize the extent to which he could be successful in this.”