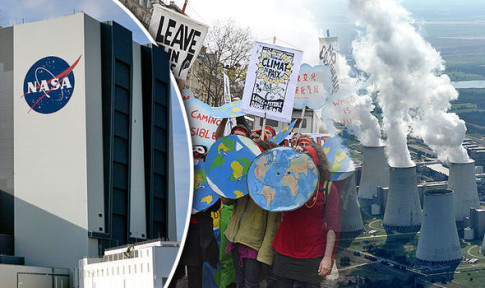 Environmentalists have long argued the burning of fossil fuels is responsible for global warming and predicted temperature increases because of the high levels of carbon dioxide produced – which causes the global greenhouse effect.

But those arguments have been thrown into doubt after NASA found the Earth has cooled in areas of heavy industrialisation where more trees have been lost and more fossil fuel burning takes place.

A NASA spokesman said it was “well known” that aerosols such as those emitted in volcanic eruptions and power stations, act to cool Earth, at least temporarily, by reflecting solar radiation away from the planet.

He added: “In a similar fashion, land use changes such as deforestation in northern latitudes result in bare land that increases reflected sunlight.”

Kate Marvel, a climatologist at GISS and the paper’s lead author, said: “Take sulfate aerosols, which are created from burning fossil fuels and contribute to atmospheric cooling.

“Because earlier studies do not account for what amounts to a net cooling effect for parts of the northern hemisphere, predictions for TCR and ECS have been lower than they should be.”

But rather than bow to the reality of this new information, NASA has circled the wagons.

“This means that Earth’s climate sensitivity to carbon dioxide—or atmospheric carbon dioxide’s capacity to affect temperature change—has been underestimated, according to the study.”

So now it’s official, they have it both ways: Burning fossil fuels causes BOTH global warming and global cooling.