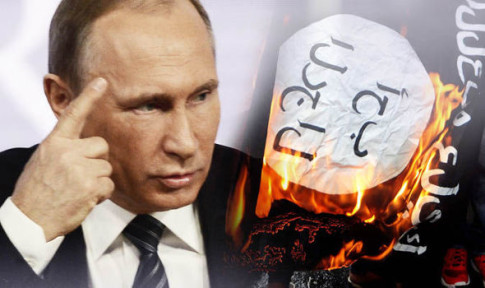 – Russia is ready: Putin warns his men could use MORE military might to destroy ISIS jihadis:

RUSSIAN President Vladimir Putin has warned his armed forces are ready to use “more military means” to obliterate Islamic State (ISIS) in Syria as his fight against the terror group rages on.

The Russian leader boasted about how the twisted jihadis have yet to see the full force of his aggression, as he said Moscow was ready to batter the militants with “the most modern weapons”.

Russia is currently in the midst of an explosive campaign against the evil terror group – also known as Daesh – with the nation claiming to have already wiped out hundreds of terrorists.

Speaking about Russian military presence in Syria, President Putin was quoted as saying: “We see how efficiently our pilots and intelligence agents coordinate their efforts with various kinds of forces – the army, navy and aviation, how they use the most modern weapons.

“I want to stress that these are by far not all of our capabilities. We have more military means. And we will use them – if need be.”

This week the iron-fisted leader ramped up his anti-terror crusade as he launched a huge crackdown on ISIS recruiters by calling in his feared secret service to round up thousands of jihadis.

Moscow has identified more than 2,900 of its own citizens suspected of joining ISIS and other radical Islamist groups, and is actively hunting them down both at home and abroad.

In contrast it emerged just hours before that overwhelmed British security services are allowing our homegrown jihadis to leave freely, deciding it is safer to get them out of the country than keep tabs on them.

This month saw Britain answer a rally cry from world leaders after MPs voted in favour at the House of Commons of extending air strikes from Iraq into Syria.

Just a week after the historic vote, Prime Minster David Cameron spoke on the phone with President Putin, and the political pair pledged to work together to finally destroy ISIS.

Russia has been conducting daily airstrikes in Syria since September 30.

However, the US has accused Russia of only looking to prop up Syrian President Bashar al-Assad’s regime by bombing Syria – rather than tackling terror.

Russia hit back by rubbishing the claims and retaliated by branding the US “short-sighted and weak”.

Last month an Express.co.uk poll revealed the Russian crusade in Syria has the support of more than two thirds of Britons.

More than 27,000 people voted in the Express.co.uk poll with 71 per cent saying they “support Vladimir Putin’s bombing campaign in Syria”.