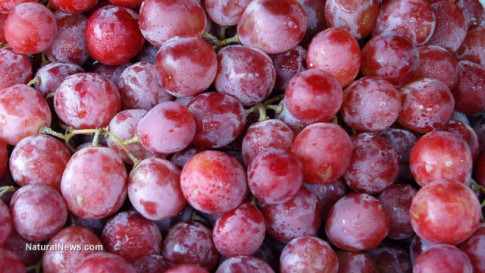 For patients facing a diagnosis of life-threatening cancer, the recommended cure can often be as potentially harmful to health as the disease itself. But for many of these patients, scientific research shows a natural treatment using grape seed extract may hold the key to slowing the growth of cancer cells without the dangerous and deadly side effects of chemotherapy and radiation.

In fact, some of the very traits that allow certain cancer cells to resist traditional therapies may make them particularly susceptible to treatment using natural grape seed extract. In fact, findings suggest that the benefits grow with more advanced stages of cancer.

This is not wishful thinking: grape seed extract benefits hold clinical significance. Unfortunately, cancer patients are often pushed to begin radical and invasive procedures – including surgery, radiation and chemotherapy – immediately following a diagnosis of cancer. And, sadly, fear tactics are often used to rush people into risky (ineffective) procedures – which are known to cause secondary cancers later in life.

To be perfectly clear, although a majority of healthcare providers tout the “importance” of conventional care, there is little evidence that undergoing these harmful procedures can actually halt or even slow the progression of cancer cells.

In fact, a study published back in 2003 showed that chemotherapy was ineffective a startling 97 percent of the time. Later studies found that chemotherapy caused critical damage to the DNA of healthy cells and that some cancer-treatment drugs actually caused cancer tumors to grow, sometimes at an alarming rate. Despite the growing mountain of evidence, the mainstream medical community continues to push chemotherapy and radiation as the only hope for cancer patients.

By contrast, there is no evidence of harmful side effects from the use of grape seed extract. Of course, the obvious must be said, grape seed extract should never be considered the ‘only way’ to treat cancer. To successfully overcome a cancer diagnosis – one must develop a comprehensive approach to remove unwanted toxins, nourish the body with high-quality nutrients and, of course, address any other physical, mental or emotional issues such as dental problems, systemic infections or chronic issues of anger.

Researchers at the University of Colorado Skaggs School of Pharmacy and Pharmaceutical Sciences, Aurora, tested the impact of grape seed extract in colorectal cancer cell lines at several stages of the disease. They noted an increase in a number of the anticancer mechanisms found within grape seed extract with increasing cancer stages. In contrast, chemotherapy has been found to be of diminishing effectiveness with advanced stages of cancer.

It has been known for some time that the bioactive compounds found in grape seed extract have the ability to selectively target certain types of cancer cells. The 2012 study showed that many of the same mutations enabling colorectal cancer cells to metastasize and resist conventional therapies are the very facets that make them sensitive to treatment with grape seed extract.

A similar study published earlier in the journal Carcinogenesis found that in both cell lines and mouse models, grape seed extract killed head and neck squamous cell carcinoma cells, without harming nearby healthy cells. In that published paper, the authors noted that grape seed extract created an environment unfavorable to cancer cell growth.

Positive effects, using grape seed extract, have been shown to multiply with increasing stages of cancer. Naturally, many people would wonder, ‘why don’t conventionally-trained physicians share this information with their cancer patients?’ Because it would threaten their livelihood and, even if they did say something, they could lose their medical license for suggesting a non-conventional approach.

The study, mentioned earlier in this article – focusing on colorectal cancer, showed that less than half the concentration of grape seed extract was needed to kill 50 percent of stage IV cells as was necessary to realize similar results at stage II cancer.

It is not unusual, for example, to find that a colorectal cancer cell exhibits upwards of 11,000 genetic mutations. Because of this, cancer can quickly become resistant to conventional treatments able to target only a very limited number of mutations.

The findings provide new hope for cancer patients, many of which will not be diagnosed until an advanced stage of the disease when chemotherapy is least effective. Unlike the harmful effects documented with conventional treatments, the researchers did not see any harmful effects of grape seed extract.