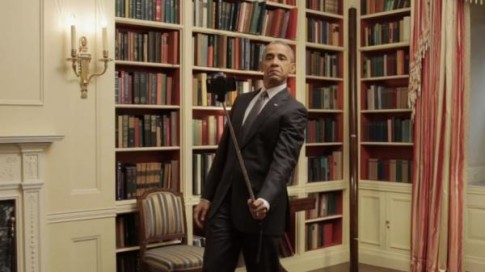 “Obama indicated that he did not see enough cable television to fully appreciate the anxiety after the attacks in Paris and San Bernardino.”

A story published by the New York Times late Thursday night caused some major media waves. The story, which was written by reporters Peter Baker and Gardiner Harris, included a remarkable admission by Obama about his response to the recent terror attacks in Paris and San Bernardino, California.

By Friday morning, however, the entire passage containing Obama’s admission had been erased from the story without any explanation from the New York Times. Here’s the passage that was included in the story when it was published Thursday night, courtesy of CNN’s Brian Stelter:

In his meeting with the columnists, Mr. Obama indicated that he did not see enough cable television to fully appreciate the anxiety after the attacks in Paris and San Bernardino, and made clear that he plans to step up his public arguments. Republicans were telling Americans that he is not doing anything when he is doing a lot, he said.

The version of the New York Times story that was published early Thursday evening indicated that Obama knew he was out of touch with the country on terrorism, and he thought that was due to not watching enough television. Obama critics immediately pounced on the stunning admission from the president, expressing shock that he would claim that a lack of TV time was the real reason for him not understanding Americans’ anxiety about terrorism.

As of Friday morning, however, the passage containing Obama’s admission was gone. Newsdiffs.org, a web site which captures changes made to online news stories, indicates that the major revision to the NYT story happened late on Thursday night, several hours after the story was published (text with a red background and strike-through is text that was eliminated from the story; text with a green background is text that was added to the story since its last revision): 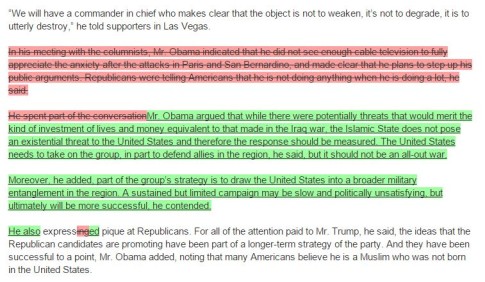 Hey @peterbakernyt@GardinerHarris: Why did you delete the newsworthy part of your story? https://t.co/uc7L9yEhaapic.twitter.com/ME8WJauXZ5

The unexplained deletion of that major passage wasn’t the only significant change made to the story since it was first published. New York Times editors also changed the story’s headline four separate times, according to Newsdiffs.org. Each headline revision either put Obama in a better light or put the GOP in a worse one.

The original headline when the story was first published was “Obama Visiting National Counterterrorism Center.” Less than two hours later, the headline was “Obama, at Counterterrorism Center, Offers Assurances On Safety.” Then the headline was changed to “Frustrated by Republican Critics, Obama Defends Muted Response to Attacks.” Two hours later, the headline was once again revised to “Under Fire From G.O.P., Obama Defends Response to Terror Attacks.” The most recent headline revision, which accompanied the deletion of the passage where Obama admitted he didn’t understand the American public’s anxiety about terrorism, now reads, “Assailed by G.O.P., Obama Defends His Response To Terror Attacks.”

The addition (116 words) was much longer than the deletion (66 words) of the section that made Obama look bad. https://t.co/CAqgHVDbyN

Baker and Gardiner, the two reporters who authored the NYT story, have yet to explain why Obama’s admission about being out of touch with the public on terrorism was deleted from their story.

UPDATE: The New York Times claimed in a statement late Friday morning that its deletion of the Obama passage was not “unusual” and that it was merely “trimmed for space in the print paper”:

Statement from NY Times re: deleting that passage about President Obama not recognizing anxiety over terrorism. pic.twitter.com/PwZngc88G2

The problem with this explanation is that it doesn’t make any sense when you review the first major online revision, which Newsdiffs.org archived at 10:21 p.m. EST. In that version, only one substantive revision was made: the paragraph about Obama not watching enough cable TV was removed and replaced with two paragraphs about Obama’s plan to combat ISIS.