– ‘Like a warzone’: Truck drivers at Calais fear for their lives as angry refugees attack:

Frustrated with heightened security and finding it ever harder to cross into the UK, migrants in the French port of Calais have been attacking truck drivers. RT’s Polly Boiko joined one driver for a Calais-Dover trip to get the lowdown on the risks they face.

Veteran truck driver Tony Fox, who took an RT film crew for a drive to Calais, says he hasn’t felt such fear for his safety in his 40 years of experience.

“I’m a prime target, because I’m on English plates. So they know I’m English.”

There’s a high police presence around the migrant camp at the border. But the drivers still have to make it through a passage lined with migrants at the roadside, throwing large rocks. 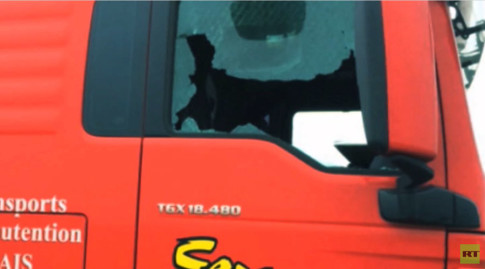 One of the most notorious places in the city of Calais is the so-called “Jungle” camp, where 4,500 migrants now live. The camp is the site of regular clashes between asylum seekers trying to cross the English Channel to the UK and police officers.

Truck drivers have been resorting to a variety of tactics to get through without rocks smashing through their window; some even placed bits of pork on their trucks’ rear bumpers to deter the Muslim refugees from climbing in or moving closer to attack.

The only safe place for drivers is inside the walls of the port, where the trucks get parked indoors and security officers roam the premises with sniffer dogs. After a number of security and immigration checks, they can finally relax on the ferry that takes them to Dover on the English coast, which is visible to the naked eye on a good day.

Earlier in the year, Britain and France committed new funds to tackling the crisis at the border. But barbed wire and dogs have done little to reduce tensions among the people, whose numbers continue to grow.

Calais’s mayor has made repeated calls to Paris to send in troops for more security, but they haven’t been answered.

“I was coming into Calais, [there were] immigrants all over the road… threw a granite block straight through my windscreen,” driver Paul Milton said. “They’re literally just pelting your truck with rocks for no apparent reason. And there’s not enough police to stop it.

“It feels like a warzone… they call it Warzone Wednesday,” other drivers at the port told RT.

The enraged crowds only have to smash the glass and get in through the side door, Fox explains. “It could come to the stage where you’ve stopped and they’re dragging you out of here.” 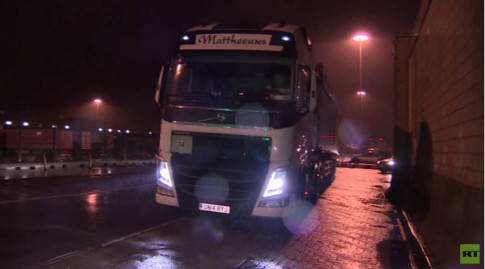 The journey from France to Britain has become one the drivers perceive as a constant struggle. But trucks aren’t the only means to get through Calais and into Britain. Some migrants attempt to storm the Channel Tunnel instead. This has been leading to clashes with police, as was reported on Thursday, when a group of 1,000 refugees made a break for Britain.

“We noted the presence of 800-1,000 migrants … near the Channel Tunnel,” a police source told AFP on Thursday. “As they approached the tunnel, several migrants tried hard to slow down the flow of traffic so they could climb into the trucks.”

The number of asylum seekers during the daytime was “unprecedented,” the source added, as migrants usually try to cross the Channel Tunnel at night.