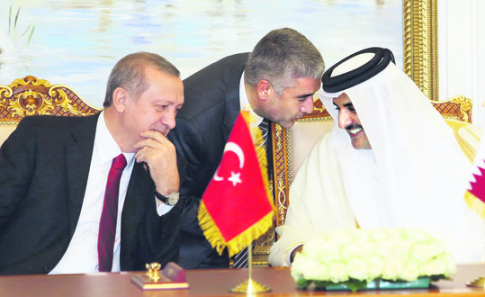 – ISIS Axis Assemble! Turkey To Establish Military Base In Qatar:

As we never tire of reminding readers, it’s critical to understand that the conflict in Syria, as interesting and important as it is in isolation, is part of larger story. As we documented in “Mid-East Coup: As Russia Pounds Militant Targets, Iran Readies Ground Invasions While Saudis Panic,” an epochal shift is taking place in the region

Preserving the Assad government is absolutely critical for Iran. Syria serves as a key link between Tehran and Hezbollah in Lebanon and were Damascus to fall to a Western puppet government, Iran’s so-called “Shiite crescent” would wane. Riyadh, Doha, and Ankara know this of course and would like nothing more than to push the Iranians out of the Arab Peninsula, and ideally, undercut Tehran’s influence in Iraq as well.

The conflict in Yemen is the same story. Iran backs the Houthis and just about the last thing the Saudis, Qatar, and the UAE want to happen is for Iran to effectively establish a colony on Riyadh’s southern border with a cozy view of the  Bab-el-Mandeb. That explains why the Gulf monarchies have put so much effort into driving the Houthis back and why the they won’t likely stop until Sana’a is recaptured (even if a few MSF hospitals and a UNESCO world heritage site have to be destroyed along the way).

In short, this is an all-out regional Sunni vs. Shiite proxy war with the US backing the Sunnis and Russia backing the Shiites. If Iran and Russia win, Tehran will have cemented its foothold in Syria and Iraq just as international sanctions are lifted. If the Saudis win, the status quo will be preserved only with a “friendly” government in Damascus and a restored Hadi regime in Yemen.

With the stakes so high, it’s no wonder that all sides are sparing no expense. The Saudis are pouring resources into the Yemen fight even as Riyadh’s fiscal deficit has ballooned to some 20% of GDP in the face of slumping crude prices. Qatar and Turkey are funneling weapons and money to proxy armies in Syria and Ankara is apparently willing to risk its international reputation on the way to facilitating the ISIS oil trade. Meanwhile, Russia is all-in on the air campaign in Syria and Iran has committed Hezbollah, thousands of Iraqi Shiite militiamen, and its most important generals to Assad’s cause.

As Hezbollah advances on Aleppo under cover of Russian airstrikes, the anti-Iran/anti-Assad nexus is getting concerned. Recall that in October, Qatar hinted at direct military action in Syria when Foreign Minister Khalid al-Attiyah told CNN that “if a military intervention will protect the Syrian people from the brutality of the regime, we will do it [along with] our Saudi and Turkish brothers.”

Well don’t look now, but Turkey is set to establish a military base in Qatar in order to help the countries “confront common enemies.” As Reuters reports, “establishment of the base, part of an agreement signed in 2014 and ratified by Turkey’s parliament in June, intensifies the partnership with Qatar at a time of rising instability and a perceived waning of U.S. interest in the region.”

“The two countries have provided support for the Muslim Brotherhood in Egypt, backed rebels fighting to overthrow Syrian President Bashar al-Assad and raised the alarm about creeping Iranian influence in the region,” Reuters goes on to note, adding that “3,000 ground troops would be stationed at the base – Turkey’s first overseas military installation in the Middle East – as well as air and naval units, military trainers and special operations forces.”

The deal also opens the door for Doha to establish its own base in Turkey in the future. “Turkey and Qatar face common problems and we are both very concerned about developments in the region and uncertain policies of other countries,” Turkey’s ambassador to Qatar Ahmet Demirok said. “We confront common enemies. At this critical time for the Middle East cooperation between us is vital.”

Bear in mind that this comes just as speculation is running high regarding the possibility that the US, Saudi Arabia, Qatar, and Turkey may soon look to send in tens of thousands of ground troops to Iraq (and possibly Syria). The takeaway is this: even as Germany (and next France) seem to be moving towards a more cooperative approach when it comes to coordinating with the Assad government in the war on terror, Saudi Arabia, Qatar, and Turkey’s resolve to see the Syrian government fall has only hardened. The question is whether the US will continue to back its allies in the region or follow Germany down a more conciliatory path when it comes to dealing with the Syrian “problem.”