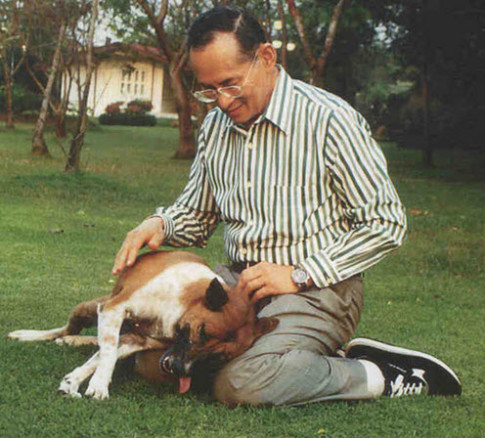 In America, we often joke that what we post on the internet might land us in prison, but for the time being – though perhaps not for long – we are generally safe to say what we like about the government. We worry mostly only about the “slap on the wrist” of probably being placed on a watch list.

A man in Thailand, however, faces 37 years in prison for criticizing the king’s dog on the internet, as well as allegedly insulting the monarchy.

Thanakorn Siripaiboon, a factory worker, faced trial this week in a military court for making a “sarcastic” comment about the king’s dog online. Though officials declined to cite any specific statements, CBS News reports the man shared an “inappropriate” picture of the dog and liked a photo disparaging to the king.

King Bhumibol Adulyadej, 88, found Tongdaeng, a mutt, in an alley in 1998, taking her under his wing. He even wrote a popular book about her in 2002, which was turned into a recently released animated film that reached No. 2 at the box office in Thailand last week. Like the king, the dog is beloved by much of the population, and ironically, if not predictably, the king’s book praises Tongdaeng for her submissive qualities of “respect,” “manners,” “obedience,” and “loyalty.”

Mr. Thanakorn’s charges are not limited to “insulting” the dog. He is also charged with sedition for sharing an infographic online that alluded to corruption in the military’s construction of a monument intended to celebrate past monarchs. Another man was arrested on Sunday for sharing the same image.

The offenses fall under the country’s lese majeste — or “injured monarchy” — rules, which are some of the most stringent in the world. The laws dictate that it is illegal to question or criticize the monarchy or the royal family.

As BBC has explained: “Article 112 of Thailand’s criminal code says anyone who ‘defames, insults or threatens the king, the queen, the heir-apparent or the regent’ will be punished with up to 15 years in prison.” Each individual charge carries a separate 15 year sentence, a penalty that has been in place since 1908, when the country’s first criminal code was established.

Though Thailand has a monarchy, the nation also operates a democracy. In spite of the purported democratic system, the military has staged coups 11 times since 1932. Regardless, various constitutions have stipulated that “The King shall be enthroned in a position of revered worship and shall not be violated. No person shall expose the King to any sort of accusation or action.” Anyone can file lese majeste charges against anyone, but they must be formally investigated by police. Despite public participation in the process, such arrests are not highly publicized so as at avoid encouraging others to violate the strict laws.

Following the military’s latest coup in May of last year, the junta has increasingly cracked down on individuals suspected of violating the laws, though there is no concrete definition of what ‘insulting the monarchy’ actually means.

According to Mr. Yingcheet, project manager for iLaw, a local rights group that monitors lese majeste, the number of prosecutions under Article 112 has risen sharply since last year.

“Just before the coup, there were just five people in prison under lèse-majesté and only two ongoing prosecutions,” Yingcheet said. “The total number of people who have been charged under lèse-majesté is now at 51, since the coup,” says Yingcheet. “Four were released, three have been bailed out, and one case was suspended.” The others still have open cases or are already serving their terms.

On Tuesday, a day after Mr. Thanakorn was arrested, a mother pled guilty to insulting the monarchy in order to reduce her sentence to seven years. In September 2014, a social activist and editor of a magazine received a ten year sentence for writing two articles deemed offensive to the monarchy.

Following that ruling, Amnesty International said, “Authorities in Thailand have in recent years increasingly used legislation, including the lese majeste law, to silence peaceful dissent and jail prisoners of conscience.” In August of this year, the Office of the United Nations High Commissioner for Human Rights criticized “the shockingly disproportionate prison terms.”

Even the United States ambassador to Thailand has been investigated — for giving a speech on  “lengthy and unprecedented prison sentences.” An academic was charged under lese majeste for criticizing a king who ruled over 400 years ago.

Earlier this year, a tour operator pled guilty to 6 separate counts of lese majeste violations, and the military court reduced the sentence to 30 years because the “suspect” pleaded out. On the same day, a hotel employee received 28 years after pleading guilty to seven counts of lese-majeste, which cut the sentence in half, from 56 years.

Vice News reported that these two sentences came “just a few days after a man with a long history of mental illness was sentenced to five years in prison for allegedly slashing a portrait of the king and queen, and only a few months after a businessman in the northern city of Chiang Rai was sentenced to 25 years for posting allegedly defamatory Facebook messages about the monarchy.”

Further, the New York Times noted that since its coup, the military has “relentlessly cracked down on challenges to its power, detaining journalists, academics, politicians and students for ‘attitude adjustment’ sessions at military camps. Dissidents are made to sign pledges that allow for financial penalties if they take part in ‘political activity.’”

Though the government itself has shown a strong tendency toward censorship, fear of criticizing the monarchy has led organizations to censor themselves. News of Mr. Thanakorn’s trial, which the New York Times covered, was excluded from the Thailand edition of the paper. Instead, the front page left a space blank — and it wasn’t the first time. Earlier this month, a story on the Thai economy was censored from the Thai New York Times, as was a story the same week about the royal family’s wealth. In all three cases, a standard message appeared:

“The article in this space was removed by our printer in Thailand. The International New York Times and its editorial staff had no role in its removal.”

Last year, a popular chain of Thai theaters refused to show the Hunger Games: Mockingjay at the same time students were arrested for flashing the film and book’s popular salute during the a speech by the junta’s top general.

Though the king is wildly popular in Thailand and the government cracks down harshly on dissent, it has clearly failed to stop people from resisting. Even those familiar with the stringent policy, however, were surprised at Mr. Thanakorn’s charges for disrespecting the royal dog.

“I never imagined they would use the law for the royal dog,” Anon Numpa, Mr. Thanakorn’s lawyer, said. “It’s nonsense.”