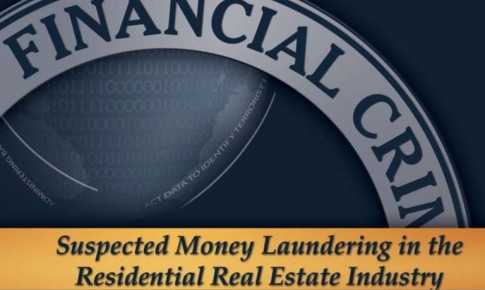 – The Foreign Criminals Using Los Angeles Real Estate to Launder Money and the Developers Who Help Them:

Here, as in other roosting places of the superrich, the recent influx of foreign money has gone hand in hand with the rising use of shell companies — generally limited liability companies. Shell companies were used in three-quarters of purchases of over $5 million in Los Angeles over the last three years, a higher rate even than the roughly 55 percent in New York, according to a New York Times analysis of data from PropertyShark. What is more, in Los Angeles, where so many of the new palaces are spec houses — luxury magnets for global wealth — not only are the buyers shielded by shell companies, but the developers are, too.

– From the New York Times article: A Mansion, a Shell Company and Resentment in Bel Air

While New York City and London are already well known as top destinations for shady, foreign-money laundering oligarchs who often attain untold riches by thieving from their own people, the Los Angeles area has likewise morphed into a criminal real estate hub.

Monday’s article in the New York Times, titled, A Mansion, a Shell Company and Resentment in Bel Air, sums up so much of what is wrong about the U.S. economy and society as we reflect on how far we’ve fallen in 2015. A culture in which not only are the rich and powerful above the law, but where foreign criminals also can do whatever the heck they want and get away with it as long as they have billions to throw around. The fact that no one seems to be doing anything about any of it tells you all you need to know.

What follows are a few excerpts, but you should really read the entire article. From the New York Times:

Yet for all that, over four years of violation notices, inspections and hearings, efforts to hold someone accountable for the mess at 901 Strada Vecchia have repeatedly hit a legal wall. It is, as a judge said during an October session where once again nothing got done, “an extremely complicated case.”

That is because “themodernhouseofhadid” belongs not to Mr. Hadid but to an entity that keeps the actual owner at a legal remove — a shell company named 901 Strada L.L.C.

Fueled largely by the vast streams of wealth crossing the globe as never before, a new generation of hyper-luxury homes with stratospheric price tags is colonizing the most gilded hillsides and canyons of Los Angeles. In some areas, every third or fourth home has been torn down, leaving gashes of dirt and debris where new mansions will rise.

And more often than not, the people behind the purchases are hidden by shell companies.

Here, as in other roosting places of the superrich, the recent influx of foreign money has gone hand in hand with the rising use of shell companies — generally limited liability companies. Shell companies were used in three-quarters of purchases of over $5 million in Los Angeles over the last three years, a higher rate even than the roughly 55 percent in New York, according to a New York Times analysis of data from PropertyShark. What is more, in Los Angeles, where so many of the new palaces are spec houses — luxury magnets for global wealth — not only are the buyers shielded by shell companies, but the developers are, too.

Today in Los Angeles, as at 901 Strada Vecchia, L.L.C.s have provided insulation — some would say impunity — amid a gathering anti-development backlash.

Head up North Alpine Drive in Beverly Hills, for example, and on the right is a $14.7 million home owned by a shell company tied to Kola Aluko, a Nigerian businessman who is a figure in an investigation of that country’s former oil minister.

A block away is one of several local properties that have been owned by shell companies tied to a son of Suharto, the corrupt and brutal former president of Indonesia.

And back down the hill is Le Palais, a faux chateau — with a swan pond and a Turkish bath with hand-carved Egyptian limestone columns — that a shell company tied to Mr. Hadid sold to a shell company tied to Lola Karimova-Tillyaeva, a daughter of the president of Uzbekistan. The Karimov family faces corruption investigations in several countries, according to two people who have worked in law enforcement and have knowledge of the inquiries.

The property at 901 Strada Vecchia is the crystallization of all this — in its grandiosity, its 60 pages of violations and other notices, and the ire it has provoked.

Silver-maned at 67, Mr. Hadid, like many of his clients, is an immigrant. Born in Israel, he moved to Virginia as a teenager with his Palestinian family and spent his early business career in the Washington, D.C., area, developing office buildings and Ritz-Carlton hotels. Central to his success even then was his ability to woo foreign financiers — French and German backers, and in particular the SAAR Foundation, a group of Saudi investors.

Among his big-ticket sales was a Beverly Hills house, with a glowing pyramid in a reflecting pool, that was acquired in 2010 by a shell company tied to the stepson of the prime minister of Malaysia. (The prime minister is now a target of corruption investigations at home and abroad.)

No. 73 is a home owned by TBN Holdings Inc., which traces to a Saudi prince, Turki bin Nasser. As a high-ranking military official during the 1980s and ’90s, Prince Turki was involved in arms deals with the aerospace company BAE that led to allegations of bribery and large fines in Britain and the United States. According to reports by The Guardian, the BBC and “Frontline,” Prince Turki was a bribe recipient, but, as had long been their practice, American and British authorities prosecuted only the company.

Prince Turki did not respond to requests for comment.

At No. 58 is a home bought in 2004 by a shell company tied to another Russian politician, a former senator named Alexander Sabadash. Last spring, Mr. Sabadash was sentenced in Russia to six years in prison for attempted embezzlement of public funds, according to Russian news reports. A man who answered at the phone number listed for the shell company said the Sabadashes might be renting the house.

Finally, at No. 27, is a home owned by a shell company that has ties to the family of Bambang Trihatmodjo, long a contentious figure in Indonesia because his businesses amassed great wealth during the reign of his father, Mr. Suharto. Though Mr. Suharto died in 2008, his family’s fortune remains a focus of questions and legal action. Last summer, the Indonesian Supreme Court ordered the Suharto family to return $324 million that was embezzled from a foundation established with public money, according to news reports.

The money was to have paid for education for the poor.

In July 2014, the city said it intended to revoke the project’s work permits. That week, Mr. Hadid posted on Instagram, “The construction must go on.” It did, even after the permits were pulled. Neighbors documented workers on the site that Thanksgiving.

Mr. Hadid is not the only developer flirting with nine-figure price tags. His main competitor is Nile Niami, a former film producer building a Bel Air home he has said he hopes to sell for $500 million.

What followed was a tangle of events spanning two continents, involving oil and water, a host of shell companies and lessons in the difficulty of tracing responsibility.

Mr. Aluko, it turned out, was on a buying spree. In addition to purchasing the Sarbonne Road house for $24 million, shell companies tied to him soon bought another Beverly Hills house for $14.7 million and two others in Santa Barbara for $33 million.

Letting these characters and their billions enter the country is a far bigger threat than Mexican immigrants, but as is typically the case, people prefer to punch downward.