Looks like the predictions – that I’ve mentioned earlier – about Turkey and Russia are coming to pass. 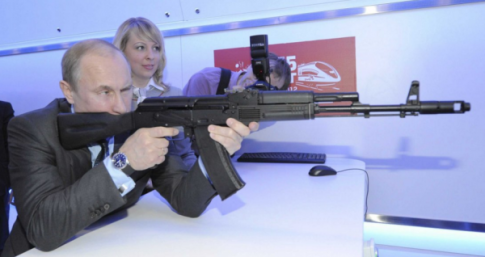 – “Let Them Fly There Now”: Putin Threatens To Shoot Down Turkish Jets In Syria, Calls Erdogan An Ass Kisser:

It’s been nearly a month since Turkey shot down a Russian Su-24 in what not only represented the most serious escalation to date in Syria’s five year conflict but also marked the first time a NATO member has engaged a Russian or Soviet aircraft in at least six decades.

The “incident” – which came several weeks after Ankara downed what certainly appeared to be a Russian drone – infuriated The Kremlin, setting off a war of words that culminated in a lengthy presentation by the Russian MoD which purported to prove that illicit Islamic State oil flows through Turkey. Both Putin and a number of other Russian officials have implicated Erdogan and his family in the trafficking of illegal crude and there’s speculation that Ankara’s brazen move to fire on the Russian warplane stemmed from Erdogan’s desire to “punish” Russia for disrupting what Deputy Minister of Defence Anatoly Antonov sarcastically called “a brilliant family business.”

As for the Russian foreign ministry, Sergei Lavrov canceled a planned trip to Turkey and Maria Zakharova went so far as to reference Turkey’s infamous political blogger Fuat Avni (a pseudonym) on the way to suggesting that Ankara had been planning to shoot down a Russian fighter jet for at least a month.

In an effort to ensure that the downing of a Russian warplane in Syria was a “one and done” event, Moscow deployed the Moskva off the coast of Latakia and sent in the S-400 air defense systems (which were rumored to have already been in place).

Those moves rattled the US and its partners who fear that a nervous Putin might “inadvertently” shoot down an American, French, or British warplane. Indeed Putin ratcheted up the rhetoric last week. While not detailing ‘who’ he was focused on, the President told a session of the Defense Ministry’s collegium that “I order to act extremely tough. Any targets that threaten Russian forces or our infrastructure on the ground should be immediately destroyed.”

Well, in case that wasn’t clear enough, Putin took it a step further on Thursday.

During his annual news conference in Moscow, the Russian President literally dared Erdogan to send Turkish F-16s into Syrian airspace.

As Bloomberg reports, “President Vladimir Putin signaled that Russia is ready to shoot down any Turkish military aircraft that strays into Syrian airspace.”

“Turkey constantly violated Syrian airspace in the past. Let them fly there now,” he said, pointing out that Russia’s most advanced air-defense system, the S-400, is covering all of Syria.

(in case the S-400s and the Moskva should prove insufficient, Putin always has the “hands on” option)

“This is the 11th press conference Putin will have with Russian and international journalists during the three terms he has served as head of state,” Sputnik notes. “These large press meetings, held once a year, usually last several hours. Almost 1,400 journalists have received accreditation for this year’s event.”

As for whether The Kremlin thinks the US was in any way involved in the downing of the Russian warplane, Putin said he wasn’t aware of any American involvement, but did suggest (literally) that Erdogan may have been trying to kiss Washington’s ass or, in Bloomberg’s more politically correct terminology, “Turkey may have been trying to curry favor with the largest member of NATO”.

Putin: “If someone in Turkey decided to kiss Americans on a certain body part, I don’t know whether it was right or not.”

Watch the full video below.

For those who missed it, here’s an infographic look at the S-400:

1 thought on ““Let Them Fly There Now”: Putin Threatens To Shoot Down Turkish Jets In Syria, Calls Erdogan An Ass Kisser”