And what a recovery that is!

Despite a brief dead-cat-bounce late November, which Jim Cramer heralded as evidence of stabilization in China, the world’s best known freight index has collapsed to new all-time record lows this morning. Amid a persistent glut of ships and ongoing concerns about Chinese steel imports, The Baltic Dry has tumbled to 471 – the lowest level in at least 30 years. 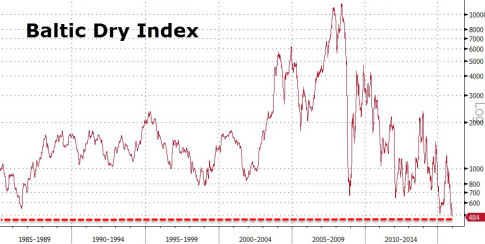 As Bloomberg adds, China, which makes about half the world’s steel, is on track for the biggest drop in output for more than two decades, according to data compiled by Bloomberg Intelligence…

Owners are reeling as China’s combined seaborne imports of iron ore and coal — commodities that helped fuel a manufacturing boom — record the first annual declines in at least a decade. While demand next year may be a little better, slower-than-anticipated growth in 2015 has led to almost perpetual disappointment for rates, after analysts’ predictions at the end of 2014 for a rebound proved wrong.

“It doesn’t help that Chinese steel production is about to see the most dramatic decline to the lowest in 20 years,” said Herman Hildan, a shipping-equity analyst at Clarksons Platou Securities in Oslo. “Demand growth is collapsing.”

Sounds like a perfect time to hike rates and exaggerate the deflationary tsunami and monetary outflows from the world’s potentially growing economies.