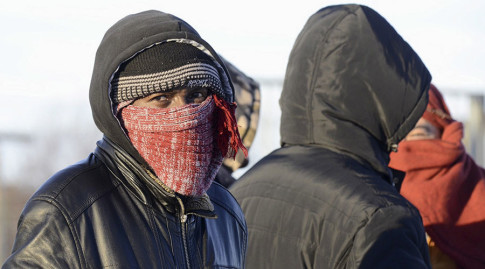 Norwegian police say they have found images of severed heads and executions on mobile phones belonging to refugees entering the country. Flags and symbols belonging to Islamic State were also found as they inspected the luggage of the migrants.

The Norwegian Police Immigration Service (PU) has been dealing with an explosion in the number of refugees and migrants wishing to cross its borders in recent months. While searching asylum seekers, they also came across photos of dead children and other victims of war and terrorism, Nettavisen reports.

“There are several reasons why there may be such images. One is that they could have been a witness and want to show people what they have seen. Alternatively, they could have been carrying symbols associated with terror groups which they were passing through. Although it may look alarming, there may be other explanations rather than support for terrorist organizations,” said Erik Haugland, the head of Norway’s asylum program.

Norway has been toughening its asylum rules since November to try to stem the tide of refugees. The new regulations, which will come into force for two years, will make it easier for the authorities to deny asylum claims if the applicant had previously been in a third country, which is deemed safe.

“The debate over refugees has shifted significantly during the autumn, from a discussion marked by sympathy and compassion to one concerned with the problems that refugees and immigrants bring,” political scientist Johannes Bergh, of the Institute for Social Research, told the Dagbladet newspaper.

There are fears that Islamic State (IS, formerly ISIS/ISIL) may be trying to infiltrate Europe with its militants. It was believed that some of the terrorists in the deadly Paris attacks on November 13, which killed 130 people and injured hundreds more, entered Europe with Syrian passports.

Meanwhile, FBI director James Comey testified before the Senate Judiciary Committee on December 9, saying that IS had at least one specialized printing machine used to print authentic-looking Syrian passports and plenty of blanks.

“The intelligence community is concerned that they [IS] have the ability, the capability to manufacture fraudulent passports, which is a concern in any setting,” Comey told US legislators.

A Dutch journalist also proved how easy it was to get hold of a fake Syrian passport, with the documents being advertised on Twitter for less than $900. Harald Doornbos, who was based in Syria in September, working for Nieuwe Revu, said that anyone – including jihadists and Syrians who have committed crimes against humanity and are banned from entering Europe – could easily lay their hands on a fake passport.“In Greece, he shows his false Syrian passport to the authorities. Since the passport is fake, under the fake name, the Greeks have no idea that they are not dealing with a Syrian refugee but a member of ISIS or Al-Qaeda,” Nieuwe Revu wrote, adding that from Greece such illegal travelers proceed to Hungary through Macedonia and Serbia, and then “travel without control to the other Schengen states.”