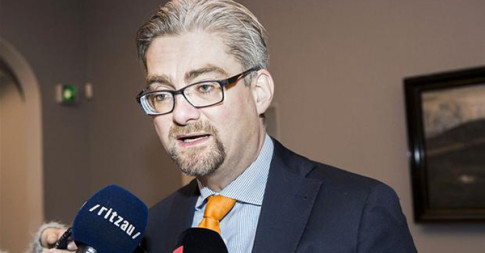 – Denmark to confiscate gold, jewelry, and other valuables from refugees:

Germany was in a world of pain at the time. They were still financially debilitated from having to make reparation payments after losing World War I, and had just barely recovered from one of the worst bouts of hyperinflation in recorded history.

By the early 1930s, the onset of the Great Depression had taken hold in Germany, driving the government to desperation once again.

They needed cash. And rather than go back to the printing press and risk hyperinflation again, German President Paul von Hindenburg signed a decree to create a new tax called the Reichsfluchtsteuer, nearly 84 years ago to the day.

It was an exit tax… a type of capital control to dissuade people from leaving with their savings.

So any German citizen with a certain level of income or assets who left the country would be charged a 25% wealth tax.

The following year, in 1932, the government generated about 1 million marks in revenue from the tax.

Of course since the tax was a ‘temporary’ measure, it was set to expire at the end of 1932.

But they extended it. And kept extending it.

By 1938, the German government collected an astounding 346 million marks from this tax.

This nearly 350x increase in tax revenue over 6 years is incredible, making the Reichsfluchtsteuer one of the fastest growing taxes in human history.

(By comparison, income tax receipts in the United States grew about 9-fold in the first six years of its history.)

So what was the German government’s secret in having so much success with this tax?

Simple. Their secret was the Secret Police.

And even though there was no longer a reason to keep the Reichsfluchtsteuer on the books since the Depression had largely subsided, the Nazi regime kept extending the law, using it almost exclusively to target Jewish citizens.

In fact, the Reichsfluchtsteuer became one of the core components of the Nazi’s confiscation strategy to plunder Jewish wealth.

Now, I couldn’t help but think of the Reichsfluchtsteuer when I heard about the government of Denmark’s latest tactic against refugees today.

This isn’t even something that has made the international, English-language news. We just happen to have a Danish-speaking member of our team.

As he explained to me, Danish Justice Minister Soren Pind recently announced his intention to have border guards confiscate gold, jewelry, diamonds, and other valuables from refugees as they enter the country.

After a bit of popular backlash, wedding rings are now off limits.

But just about anything else ranging from cash to expensive wristwatches, is fair game for confiscation, as long as the ‘loot’ (as they call it) is valuable.

So apparently Danish border guards are expected to discern whether a refugee is wearing a $15,000 IWC Schaffhausen or a $15 knock-off.

(Clearly they spent a lot of time thinking about this policy and how to implement it.)

Having armed men indiscriminately seize refugees’ personal belongings doesn’t strike me as the best representation of a free society. Not that this matters anymore.

The Danish government’s excuse is that they need to confiscate assets from refugees in order to pay for the services they’re providing to those same refugees.

This might even sound reasonable… until you realize that a government could make the same argument for every other public service they provide.

It’s the same logic as confiscating funds from your bank account in order to provide you with the FDIC. Or seizing other assets to provide ‘free’ healthcare or education.

When a government awards itself the authority to attack one particular group, they give themselves that same power to attack everyone.

In the Land of the Free, they call it Civil Asset Forfeiture– a legal form of theft in which the government can administratively steal your assets with no Constitutionally guaranteed due process.

The US government stole $4.5 billion worth of private property from its citizens last year alone, far more than the $3.9 billion stolen by common thieves according to FBI data.

And they’ll always come up with a good excuse to justify it.

This risk is not negligible. So as an insurance policy, it makes sense to ensure that you’re not holding 100% of your assets and savings within the control of a single government.

After all, they may one day be so desperate that they’ll steal from you in the name of protecting you.