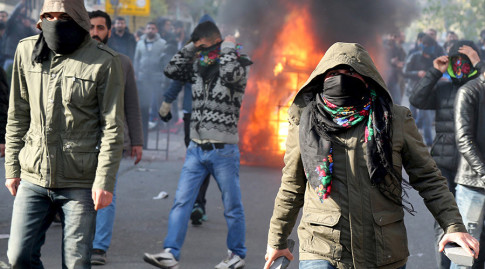 Demonstrators cover their faces as they clash with riot police during a protest against the curfew in Sur district, in the southeastern city of Diyarbakir, Turkey, December 14, 2015

Seven Kurds have been killed following clashes with Turkish security forces in the southeast of the country. Two died in the city of Diyarbakir as protesters fought with police, while a further five lost their lives in the Mardin province.

Around 5,000 people gathered for a march in Diyarbakir on Monday, according to AP, which was called by the Peoples’ Democratic Party (HDP). They are unhappy about round-the-clock curfews being implemented in the region. Diyarbakir province, in the southeast of Turkey, is a stronghold of the Turkish Kurds.

However, the protests turned violent, with police using tear gas and water cannon to disperse the demonstrators. Two people were killed as police clashed with the crowds, a hospital official and witnesses said, as cited by Reuters.

There were reports on social media that police shot dead two Kurdish protesters.

Meanwhile, in the Dargecit district in the Mardin province, five Kurds were killed. The area was under curfew according to security officials, but there is no information regarding how the people were killed.

The government says the protests in Diyarbakir are illegal, while life in the city has become difficult. A number of shops have closed, bus services are minimal and garbage collection has stopped.

Youths with scarves masking their faces tried to block streets with piles of bricks and burning wood before police pursued them into side streets, Reuters reports.

A Diyarbakir-based columnist and author, Nurcan Baysal, warned that the level violence in the province if the Turkish authorities go forward with the curfew.

“The situation now is really, very, very bad. There are a lot of clashed in different parts of Diyarbakir,” she said.

According to Baysal, the clashes spread across the city after a protest march was met with “police violence.”

The Kurds are protesting the curfew because it “isn’t just something that you can’t go out of your homes… There’s no food. There’s no water. There’s no electricity. They cut everything,” she explained.

“If the curfew continues in different parts of Kurdistan, I think the violence will increase,” the columnist said.

She also urged the Turkish authorities to “stop to giving support to ISIS [Islamic State]; to be with the Kurdish people together within this fight” against the terrorists in Syria.

The Kurdish militias, who are fighting Islamic State, “are children of the Kurds in Turkey” because the events in Syria are directly linked to the peace process between the Turkish Kurds and Ankara, Baysal said.

Curfews and tight security have also been introduced in the nearby Sirnak province. “A curfew is declared to neutralize separatist terror group members, remove explosives-laden barricades and ditches … and secure public order,” the Sirnak governor’s office said in a statement, as cited by Reuters.

The Human Rights Foundation of Turkey says there have been a total of 52 curfews imposed since mid-August across seven provinces in the region, affecting areas where some 1.3 million people live.

Tensions in the southeast of Turkey have been simmering for months as security forces have been battling Kurdistan Workers’ Party (PKK) militants after a ceasefire collapsed in July.

Thousands took to the streets of Diyarbakir in late November after Tahir Elci, a lawyer and campaigner for Kurdish rights, was shot dead in broad daylight while giving a speech in the city on November 28.

“This assassination is a deliberate act of political intimidation against all those who take part in political struggles against injustice in Turkey,” Firat Anli, a human rights lawyer and friend of Tahir Elci told RT.

Residents from the small pro-Kurdish town of Silvan, around 80km north east of Diyarbakir, claimed they had been shelled by Turkish forces in mid-November, while a curfew lasting weeks had driven them to the brink of starvation.

HDP deputy Ziya Pir claimed an official from the Interior Ministry told them that the security forces “will erase three Silvan neighborhoods from the map,” as cited by Evrensel newspaper.

Several people have been killed since the curfew was launched in the city on November 3. AFP reported seven casualties, which included two civilians and a policeman. The local IMC news website said that a small boy was amongst those killed in the shelling.