That’s from acceptance drills during October when the ship’s crew was described by Commander Mark Haney as ‘truly unstoppable.’

Fast forward to Friday and this was the scene as the Milwaukee was towed more than 40 nautical miles to Joint Expeditionary Base Little Creek, Virginia. 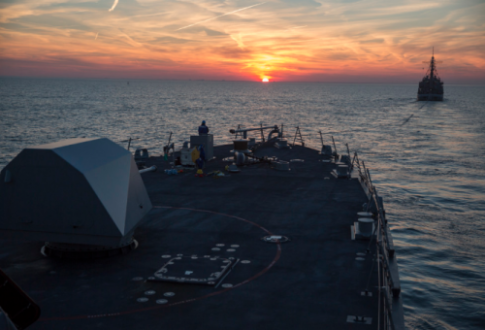 As it turns out, the Milwaukee is ‘truly unstoppable’ unless “fine metal debris” accumulates in the lube oil filter. If that happens, the vessel apparently goes from “unstoppable” to “unusable,” and must be towed to port.

According to NavyTimes, “the ship suffered an engineering casualty while transiting from Halifax, Canada, to Mayport, Florida, and ultimately its home port of San Diego.” Here’s more:

Problems with the propulsion plant began almost as soon as Milwaukee got underway from Halifax. The ship’s computer system triggered an alarm and the ship called away an engineering casualty.

Engineers cleaned out the metal filings from the lube oil filter and locked the port shaft as a precaution. In the early hours of Friday morning, the ship was conducting steering tests and lost lube oil pressure in the starboard combining gear due to the presence of the same metal filings in that filter.

The ship then dropped anchor while the engineers worked on the system. By mid-morning, the salvage ship Grapple rendezvoused with Milwaukee and connected a towing hawser line for the trip back to Little Creek.

John McCain was note happy. “Reporting of a complete loss of propulsion on USS Milwaukee (LCS 5) is deeply alarming, particularly given this ship was commissioned just 20 days ago,” everyone’s favorite Senate warhawk said. “U.S. Navy ships are built with redundant systems to enable continued operation in the event of an engineering casualty, which makes this incident very concerning.”

According to the Navy, “the Milwaukee is a fast, agile, focused-mission platform designed for operation in near-shore environments yet capable of open-ocean operation” – or not, apparently. And more: “It is designed to defeat asymmetric “anti-access” threats such as mines, quiet diesel submarines and fast surface craft.”

That sounds pretty impressive, so perhaps someone should ask Stephanie C. Hill, vice president of Ship & Aviation Systems for Lockheed Martin Mission Systems and Training business what went wrong. Here’s how Hill described the vessel when it was commissioned in November:

“The USS Milwaukee is a warship with capabilities unlike any others. The entire Lockheed Martin-led LCS industry team is proud to deliver USS Milwaukee to the crew who will bring this great ship to life to participate in the defense of our great nation.” 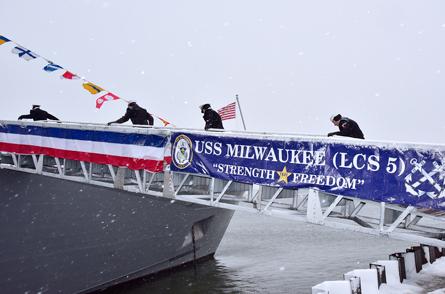 (crew members board the Milwaukee at its commissioning)

We’re sure someone at Putin’s new multi-billion, National Control Defense Center got a kick out of this.

Because there’s not much more we could add to make this any more amusing than it already is, we’ll siimply close with one last quote, this one from the Honorable Ray Mabus, secretary of the Navy:

“The spirit of the people of Wisconsin is evident in the work of the shipbuilders whose tireless efforts have brought the soon-to-be USS Milwaukee to life. It is this spirit that will live on through this ship as it carries the name Milwaukee across the globe and helps ensure our Navy and Marine Corps remain the most formidable expeditionary fighting force the world has ever known.”