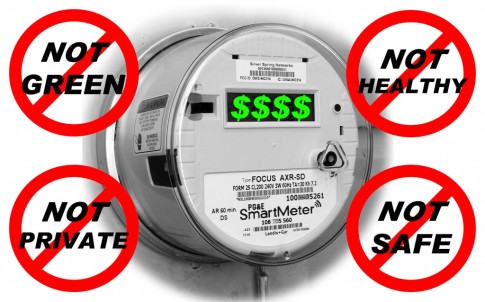 – The DUMB Aspects of Smart Meters:

Utility companies are having a heyday installing electric, natural gas and water AMI Smart Meters, which probably will help many of them—electric power companies, in particular—avoid building new power plants: they can brown-out high demand days or interrupt individual home usage if consumers use more power than utilities think we should—in addition to running up customer tabs for new Smart Meters every several years.

Recently, PASMA (Pennsylvania Smart Meter Awareness) issued two Press Releases days apart, which I think all utility consumers, regardless of where they live, ought to know about since the information deals with the probable unknown monetary side of Smart Meters, as discussed in “Consumers to Pay ‘Through the Nose’ for Smart Meters Every 6 to 7 Years,” and the very scary issue of infrastructure security risks from hackers that Smart Meters pose, as laid out in “Smart Meters Are A Security Risk to the Nation’s Power Supply,” which tells how a member of the U.S. Congress, who is an electrician, is calling for new and greater scrutiny of Smart Meters “to examine whether they compromise the Nation’s energy infrastructure.”

Below are both Press Releases, which PASMA has granted permission to reproduce.

Analog (mechanical) electric meters, in service for decades—close to a hundred years, typically lasted between 30 and 40 years before they had to be replaced, plus they were totally safe with no plastic parts that can ignite easily from “hot sockets” or arcing, and they were “grounded”.

AMI Smart Meters, which are being retrofitted on to electric, natural gas and water meters, will have to be replaced anywhere from every 6 to 7 years (according to a utility company executive at a congressional hearing in October 2015), with consumers obviously, and unknowingly, being billed and forced to pay for new replacement meters each time one is installed at their dwelling.

How much will it cost a customer who will have to pay for an electric, a natural gas, and a water Smart Meter for all three utility services into the house or apartment? Where are the savings? Has the Pennsylvania Public Utility Commission taken that savings rip-off into consideration? Where are the savings when utility customers will be forced to purchase new Smart Meters every so often, i.e., Five (5) Smart Meters will be purchased in the time frame (30 to 40 years) that one analog meter would need to have been replaced?

How is a rip-off of being forced to buy a new “Smart Meter” every few (6-7) years cost effective?

Currently in Pennsylvania, PECO (an Exelon company) consumers supposedly are being charged $300 for the current installation-round of AMI Smart Electric Meters via their monthly bills. Are customers aware of that? PASMA challenges PECO to tell its customers how they are paying for Smart Meters.

PECO’s website states that in 2012, PECO began replacing safe analog meters with new fire-prone, EMF/RF–emitting AMI Smart Meters in order to ‘help’ customers understand how they use energy, plus how to save energy and money.

Save money, when customers will be forced to pay for a new, ‘updated’ technology for the “Internet of Things,” grid-complying Smart Meter every 6 to 7 years? That’s more like highway robbery than helping customers save money! What about surveillance issues, which Smart Meters will effectuate from being tied in to all ‘smart’ appliances in the house that are connected to “The Grid”?

(http://www.legis.state.pa.us/cfdocs/legis/home/findyourlegislator/) in Harrisburg about the forced-Smart Meter-purchase-rip-off coming to us every 6 to 7 years in to the future, which apparently will be parleyed into a money-making scheme for utility companies.

If utility companies want to upgrade new meters with technology that snoops on people, then they should be mandated by the PA PUC to: 1) Provide safe, grounded, and non-EMF/RF-emitting meters and, 2) bear the costs of updating their infrastructure, technology systems and meters, not forcing consumers to finance and capitalize utility companies’ operating costs.

Finally, a member of Congress, Rep. Donald Norcross (NJ-01) has expressed that there are more problems with utility companies’ “Smart Meters” than meets the eye, so he is calling for new and greater scrutiny of utility SMs to examine whether they compromise the Nation’s energy infrastructure. He issued a Press Release to that effect December 4, 2015. Phone: (202) 225-6501

Rep. Norcross candidly admits, “As an electrician and now a member of the House Armed Services Committee and Emerging Threats & Capabilities Subcommittee where I receive detailed classified briefings, I recognize the risk. Instead of guns and bombs, the bad guys can use computer keyboards to strike their targets.”

Furthermore, according to his Press Release, “Rep. Norcross pointed to a Government Accountability Office report that shows certain smart meters on the market are susceptible to cyberattacks, as well as findings from the intelligence community of attacks overseas that caused disruptions to power supplies in multiple cities.”

Not only that, but PASMA contends that SMs are extremely vulnerable to various types of computer hacker attacks because they operate using microwave technology, which is very porous and insecure. Additionally, personal identity theft may or can become rampant from SM hacking.

According to Rep. Norcross, “There’s evidence our nation’s power systems could be vulnerable. And those weaknesses could be exploited by cyber criminals. We need to take safeguards to protect this vital infrastructure now, to stop hacking before it happens. As a nation, we’re so technology-dependent. Any attack on our power grid could be catastrophic.”

PASMA seconds Rep. Norcross’s statements and encourages the Pennsylvania Public Utility Commission to take note, take the Norcross information under advisement, and heed what that member of Congress, who just happens to be an electrician, warns about Smart Meters.

Additionally, PASMA heartily recommends the PA PUC revisit its SM implementation orders to PA utility companies with 100,000+ customers and grant Opt-Out status to those informed and concerned consumers, who want to protect their health from Non-thermal SM adverse health effects and keep their analog meter or AMR meter, which does not produce EMFs/RFs or “dirty electricity,” but sends billing information to utility companies without meter readers having to visit every meter.

Catherine J Frompovich (website) is a retired natural nutritionist who earned advanced degrees in Nutrition and Holistic Health Sciences, Certification in Orthomolecular Theory and Practice plus Paralegal Studies. Her work has been published in national and airline magazines since the early 1980s. Catherine authored numerous books on health issues along with co-authoring papers and monographs with physicians, nurses, and holistic healthcare professionals. She has been a consumer healthcare researcher 35 years and counting.