Could this possibly be true?

If so, then what I’ve warned about continuously (see related info down below) has become a reality a long time ago and TEPCO, our governments and the press would have completely lied about it, pretending that TEPCO was in the process of removing the fuel rods from the Fukushima reactor unit 4 SFP. It’s quite ‘difficult’ (or should I say ‘easy’?) to remove something that isn’t there anymore.

But then radiation levels all over the northern hemisphere should have been skyrocketing? And nobody noticed (400.000 kg of hot plutonium being released to the atmosphere)?

Am I missing something here?

– Declassified U.S. Government Report on Fukushima: “100% of The Total Spent Fuel Was Released to the Atmosphere from Unit 4”:

We reported in 2011 that the International Atomic Energy Commission knew within weeks that Fukushima had melted down … but failed and refused to tell the public.

The same year, we reported in 2011 that the U.S. knew within days of the Fukushima accident that Fukushima had melted down … but failed to tell the public.

The fuel pools and rods at Fukushima appear to have “boiled”, caught fire and/or exploded soon after the earthquake knocked out power systems. See this, this, this, this and this.

Now, a declassified report written by the U.S. Nuclear Regulatory Commission on March 18, 2011 – one week after the tidal wave hit Fukushima – states: 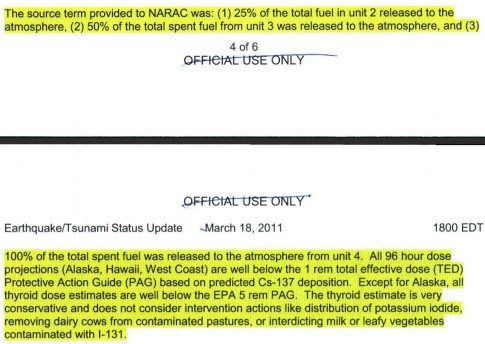 NARAC is the the U.S. National Atmospheric Release Advisory Center, located at the University of California’s Lawrence Livermore National Laboratory. NARAC “provides tools and services that map the probable spread of hazardous material accidentally or intentionally released into the atmosphere“.

The fuel pools at Units 3 and 4 contained enormous amounts of radiation.

For example, there was “more cesium in that [Unit 4] fuel pool than in all 800 nuclear bombs exploded above ground.”

– Former Ambassador To Switzerland Mitsuhei Murata: Another Accident At No. 4 Reactor Building Could Cause The ‘Final Catastrophe Of The World’

– Former Senior Reactor Operator: You Can Get A Recriticality In Fukushima No. 4 SFP – ‘There’s No Way To Shut That Down’ – ‘There You Have Another Never Ending Fountain Of Particulates And Gas’ (VIDEO)

Mitsuhei Murata, 74, a professor emeritus at Tokaigakuen University who once served as Japan’s ambassador to Switzerland:

“If the storage pool should collapse and the 1,535 fuel rods began burning in the atmosphere, an endless amount of radiation would be emitted. Of course, that would mean that Tokyo would become unlivable,” he said.

– Fukushima Reactor No. 4 Vulnerable To Catastrophic Collapse; Could Unleash 85 Times Cesium-137 Radiation Of Chernobyl; Human Civilization On The Brink

– TEPCO: Not Enough Money To Handle Fukushima Nuclear Reactor 4 Problems … ‘Having The Potential To Destroy Our World And Civilization As We Know It’