– “We’re At War, Get It Through Your Head”, Trump Doubles Down During Combative Follow Up Interviews:

12 hours after his dramatic campaign statement to shut out Muslims arrivals into the US, Donald Trump doubled down and in a series of interviews early on Tuesday, he repeatedly told anchors such as CNN’s Chris Cuomo that “we’re at war – get it through your head” in his latest heated exchange, during which he reminded America how quickly people have forgotten “World Trade Center #1 and World Trade Center #2.”

One thing that Trump did stress throughout the media blitz is that his plan to prevent Muslims from entering the U.S. was “temporary.” and in a follow up interview on ABC’s “Good Morning America” he clarified that American Muslims living abroad could return to the U.S., following conflicting statements by his campaign yesterday: when asked if Trump’s proposal applied to U.S. citizens living abroad, a Trump spokesperson had told The Hill on Monday that Trump’s proposal applied to “everyone.”

In the aftermath of yesterday’s announcement, there has been a surge of media outlets comparing Trump to Hitler (as seen below). 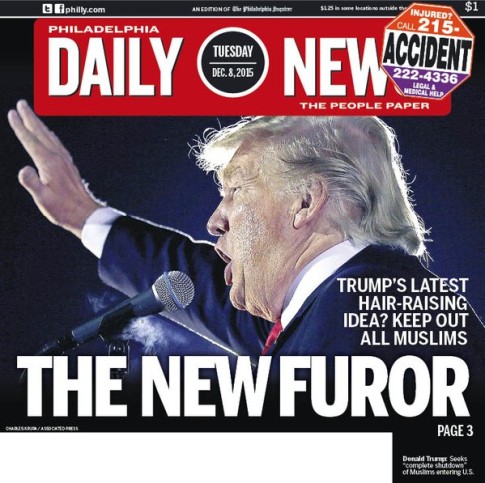 George Stephanopoulos asked Trump during the ABC interview whether the candidate was bothered by the increasing number of such comparisons, to which Trump responded with a simple, “No.”

As could have been expected, Trump’s interview  on MSNBC’s “Morning Joe” turned combative when co-host Joe Scarborough tried to interject a question, while the real estate mogul continued to speak during the phone call-in interview.  As the Hill reports, Scarborough threatened to send the interview to a break if Trump didn’t allow him to ask a question. After Trump didn’t relent, Scarborough instructed producers to cut to commercials.

After the break, Trump discussed comparisons to former President Franklin Delano Roosevelt. Questioned about whether he was proposing internment camps like the ones FDR created for the Japanese, Trump said, “I am not proposing that. This is a whole different thing,” he added later during another combative exchange.

It wasn’t just the leftist media that attacked Trump – so did the GOP, where rivals blasted Trump, including former Florida Gov. Jeb Bush who called it “unhinged,” as well as the Republican party chairs in the early voting states of Iowa, New Hampshire and South Carolina. The White House and Democratic presidential front-runner Hillary Clinton also panned the idea as un-American and unconstitutional.

Despite the condemnations, Trump said on MSNBC that “we have to get our hands around a very serious problem” adding that “not everybody has condemned” his comments.