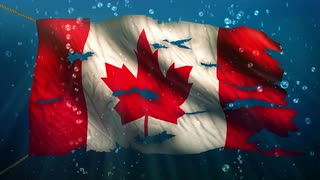 Moments ago, the Bank of Canada’s chief finally said what we had been patiently waiting for over the past several months: admission that Europe’s experiment with negative rates is about to cross the Atlantic. From Market News:

That, as they say, is “forward guidance” of what is coming.

And what is coming, is also precisely what Keith Dicker from IceCap Asset Management said in his latest monthly letter, would happen in Canada in the very near future. To wit:

Now that the election is over, the new government can quickly get down to work to missing all of their economic forecasts and budgets.

IceCap is apolitical – we support neither the left, the center or the right. Instead, we see the world with our global goggles and can confirm that despite any and all economic policies from the new (or old) government – the Canadian economy will continue it’s downward trend.

This negative outlook for Canada isn’t driven by an insular view or perspective. Rather, the global trend is downward. The economic and monetary foundation for the global economy has shifted and this is the reason for our downward view for the Great White North.
During the election campaign, we shared this view with the eventual winning party. The response was a slow yawn and disapproving look which suggested either we didn’t know what we were talking about or they were not really interested in our answer to their question.

This lack of empathy for the escalating global government debt crisis is also shared by many in the financial sector as well. Yes, increasingly more and more investment managers are echoing concerns similar to ours – but make no mistake, the majority, and especially the really big investment and mutual fund companies continue to see a recovery right around the ole corner.

Of course, this mythical corner continues to be just as elusive as unicorns, trolls, elves and dragons. In 2014, Canada’s top Bay Street economists were all clamouring for the Bank of Canada to begin raising rates – after all, these economists had very big spreadsheets, with all kinds of neat formulas and corporate logos that predicted the Canadian economy was about to shoot to the moon.

Yes, the good times were back.

At the time, IceCap stated that the global economy was beginning to roll over and that the Canadian economy would begin shooting in the opposite direction. As well, based upon our outlook for declining growth, we also expected the Bank of Canada to REDUCE interest rates, not INCREASE interest rates as predicted by Bay Street.

Naturally, our view meant that the Canadian Dollar would decline significantly relative to the US Dollar. This provided us with a great opportunity to add a significant USD currency strategy within every Canadian Dollar Client Portfolio.

Now here we are in 2015, and the Canadian Dollar (and other currencies) has in fact declined significantly, and the Bank of Canada has in fact REDUCED interest rates not once, but twice.

Which brings us back to Canada. Currently, both the Bank of Canada and Bay Street economists predict the Canadian economy to recover in 2016, and then to accelerate in 2017.

The ONLY way for this to occur is if the global economy sheds it’s government debt problem. IceCap places a 0% probability of this occurring.

Instead, everyone should expect:

And for the Canadian Dollar? It’s headed lower, a lot lower. If you are not Canadian, just know that you are in a similar boat. And when it comes to boating, there is one simple rule – going against the flow is difficult, it’s exhausting, and it can be humbling.

So, in order to force the Bank of Canada’s hand, is this what’s coming next? 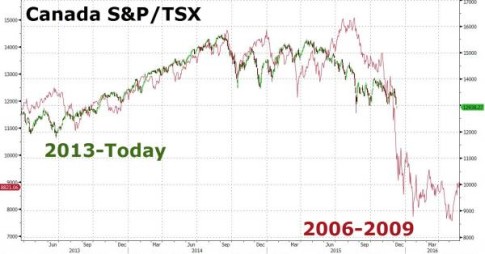