Turkey just can’t seem to help itself when it comes to escalations in the Mid-East.

First, Erdogan intentionally reignited the conflict between Ankara and the PKK in an effort to scare the public into nullifying a democratic election outcome. Then, the Turks shot down a Russian warplane near the Syrian border. Finally, in what very well might be an effort to protect Islamic State oil smuggling routes, Erdogan sent 150 troops and two dozen tanks to Bashiqa, just northeast of Mosul in a move that has infuriated Baghdad.

We discussed the troop deployment at length on Saturday in “Did Turkey Just Invade Iraq To Protect Erdogan’s ISIS Oil Smuggling Routes?,” and you’re encouraged to review the analysis in its entirety, but here was our conclusion:

The backlash underscores the fact that Iraq does not want help from NATO when it comes to fighting ISIS. Iraqis generally believe the US is in bed with Islamic State and you can bet that Russia and Iran will be keen on advising Baghdad to be exceptionally assertive when it comes to expelling a highly suspicious Turkish presence near Najma.

You’re reminded that Iran wields considerable influence both politically and militarily in Iraq. The Iraqi military has proven largely ineffective at defending the country against the ISIS advance and so, the Quds-backed Shiite militias including the Badr Organisation, Asaib Ahl al-Haq and Kataib Hezbollah have stepped in to fill the void (see our full account here).

Of course that means that the Ayatollah looms large in Iraq and when it comes to loyalty, both the militias and a number of Iraqi lawmakers pledge allegiance to Tehran and more specifically to Qassem Soleimani. The point is this: Iran is not going to stand idly by and let America and Turkey put more boots on the ground in Iraq which is why just hours after Ash Carter announced that The Pentagon is set to send in more US SpecOps, Kataib Hezbollah threatened to hunt them down and kill them. Not coincidentally, PM Haider al-Abadi rejected a larger US troop presence just moments later.

Now, Abadi has given Turkey 48 hours to get its troops out of Iraq or else.

Or else what?, you might ask. Well, or else Baghdad will appeal to the UN Security Council where Russia and China would likely support the Iraqi cause.

But that’s a little too meek of a solution for some Iraqi politicians including Hakim al-Zamili, the head of Iraq’s parliamentary committee on security and defense who said on Sunday that Iraq “may soon ask Russia for direct military intervention in response to the Turkish invasion and the violation of Iraqi sovereignty.”

“Iraq has the ability to repel these forces and drive them out of Iraqi territory. We could also request Russia to intervene militarily in Iraq in response to Turkish violation of Iraqi sovereignty,” he told Al-Araby al-Jadeed.

Well guess what? Hakim al-Zamili is a somebody.

He was arrested in 2007 by Iraqi and American troops while holding a high ranking office in the Health Ministry. Zamili was charged with sending millions of dollars to Shiite militants who subsequently kidnapped and killed Iraqi civilians. Sunni civilians. More specifically, the US suspected Zamili “of using his position to run a rogue unit of the Mahdi Army, the Shiite militia that claims loyalty to the cleric Moktada al-Sadr,” The New York Times reported at the time, adding that he was accused of “flooding the Health Ministry’s payroll with militants, embezzling American money meant to pay for Iraq’s overworked medical system and using Health Ministry ‘facilities and services for sectarian kidnapping and murder.”

Here’s an interesting account from NPR ca. 2010, after parliamentary elections:

At Friday prayers yesterday in Baghdad’s Sadr City slum, one man in a gray suit seemed to attract as much attention as the preachers speaking over the P.A.

After a sermon that praised both armed and political resistance to the occupation of Iraq, many from the crowd of thousands rushed up to the front to congratulate Hakim al-Zamili, who appears to have won a resounding mandate as a member of parliament from Baghdad.

Though a celebrity here in Sadr City, many Iraqis call him a war criminal. Zamili was the deputy health minister during the ramp-up to Iraq’s civil war, and he’s accused of turning the ministry’s guards into a Shia death squad, kidnapping and killing hundreds of Sunnis. Another ministry official who denounced Zamili disappeared and is presumed dead.

After being arrested and held over a year by the Americans, an Iraqi court acquitted Zamili after a brief trial.

“If I were really involved in those crimes, the courts would have convicted me,” Zamili said.

Anyway, the point is that as we’ve been saying for months, Shiite politicians along with Iran-backed militias now control Iraq, which has essentially been reduced to a colony of Tehran.

There will be no unilateral decisions on the part of the US or Turkey to place troops in the country without pushback from Baghdad and everyone involved knows that when Baghdad pushes back, it means Iran disapproves.

“Turkish interests in Iraq will now be a legitimate target because of Turkey’s assault on Iraqi territories,” Kata’ib Sayyid al-Shuhada, one of the Shia militias of the Popular Mobilisation said in a statement. Similarly, Harakat al-Nujaba called Turkey “a terrorist state.” You’re reminded that these groups have a reputation for fearing no one other that Khamenei himself. Not the US, not Turkey, not ISIS, no one: 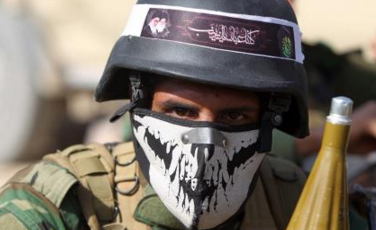 We close with what Zamili said after the establishment of the Baghdad-based joint intelligence cell comprising officials from Iran, Russia, Syria, and Iraq:

“The idea is to formalize the relationship with Iran, Russia and Syria. We wanted a full-blown military alliance.”

The recent deployment into northern Iraq differs from past deployments in three ways. First, Turkey does not appear to have undertaken the action in order to contain the PKK directly, as there is no significant PKK activity in or around Bashiqa. The base is also located too far from other priority territory for the PKK, including Sinjar west of Mosul, to be used as an effective staging point for future operations against the PKK. Second, the Turkish battalion, deployed to an area within the Disputed Internal Boundaries (DIBs) – areas that have substantial Kurdish populations but remain outside of Iraqi Kurdistan. Turkey likely intends to support Barzani and the KDP in securing control over the DIBs while also positioning its own forces to better influence what forces participate in the future operation to recapture Mosul, formerly an ethnically diverse city including Arabs, Kurds, and Turkmen. Third, the Turkish deployment came only four days after Defense Secretary Ashton Carter announced that additional U.S. Special Operations Forces (SOF) would deploy to Iraq to conduct raids and intelligence-gathering in Iraq and Syria, an announcement that generated denunciations from the Shi’a political parties and threats of no-confidence votes against the Prime Minister, forcing PM Abadi to reject publicly the presence of foreign ground troops in Iraq. The Turkish troops thus deployed at a particularly sensitive time.

Turkey also maintains close connections with key players in northern Iraq. Turkey has cooperated with Kurdistan Regional President Masoud Barzani since 2013, particularly over crude oil exports through the Kirkuk-Ceyhan pipeline. Barzani and Turkey share a mutual distrust of the PKK, and the KDP currently competes with the PKK for control over Sinjar district. Turkey also possesses close relations with former Ninewa Province governor Atheel al-Nujaifi, who maintains a camp of former local police and Arab fighters in Bashiqa called the “National Mobilization.” Turkish support was essential for Atheel al-Nujaifi’s elevation to the Ninewa governorship in 2009. Finally, Turkey has close relations Osama al-Nujaifi, Atheel’s brother and the leader of the Sunni Etihad bloc in the Council of Representatives (CoR). Turkey will likely leverage these connections in order to secure greater control over what armed and political actors participate in operations to recapture Mosul. In particular, Turkey will likely support the Nujaifis over Sunni Arabs with whom Turkey has not cultivated relations.

Turkey’s deployment of troops sparked strong rejection from the full spectrum of Iraqi political actors. Iraqi Prime Minister Haidar al-Abadi and Iraqi President Fuad Masoum strongly condemned the deployment as a violation of Iraqi sovereignty and demanded that Turkey conduct an immediate withdrawal. All major Shi’a parties denounced the deployment as a violation of Iraqi sovereignty, with a leading Sadrist official calling for Iraqi airstrikes on the Turkish force if it did not depart the country. Another pro-Maliki CoR member suggesting that “a Russian force” could intervene to expel the Turkish battalion.

The U.S. will not likely press Turkey on the issue, as anonymous U.S. defense sources merely indicated that the U.S. was “aware” of Turkey’s intentions. Iranian proxy militias, however, could challenge Turkey elsewhere in the country. Iran likely ordered Iranian proxy militias to kidnap 18 Turkish construction workers on September 2 in order to pressure Turkey into ordering Turkish-backed rebels to cooperate with a ceasefire around the besieged Shi’a majority towns of Fu’ah and Kifriya in northern Syria. The kidnappings provided sufficient leverage against Turkey and the kidnapped workers were released after Syrian rebels enacted a local ceasefire. Iran could pursue similar actions against Turkish assets in Baghdad or in southern Iraq.

This situation may escalate further if Iran views the deployment as threatening its vital strategic objectives in Iraq or Syria. Iran rejects any foreign forces other than their own on Iraqi soil and backs the Patriotic Union of Kurdistan (PUK), Barzani’s rival in Iraqi Kurdish politics trying to contest his control over the Kurdistan regional presidency. Iranian proxies also recently sparred violently with the Peshmerga in Tuz Khurmato in eastern Salah al-Din proxies on November 12.

Shi’a parties will use the episode to pressure PM Abadi to strongly reject foreign intervention, particularly if reports that Turkey and Barzani signed an agreement to establish a permanent Turkish base in Bashiqa are correct. These calls could complicate U.S. plans to additional Special Operations Forces (SOF) to Iraq to as a “specialized expeditionary targeting force” that will conduct raids and intelligence-gathering in Iraq and Syria.