– WATCH: US cop places gun in black man’s mouth ‘to show off to his friends’:

“I dare you to f**king fight me, son…I just came from Iraq and I’m not scared of none of y’all.” 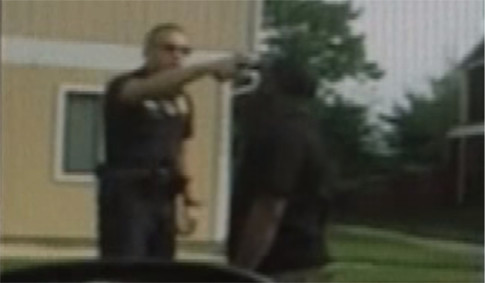 A POLICE OFFICER in the US state of Maryland has been convicted of assault and misconduct, after being caught on camera pointing his gun directly at a man’s head and in his mouth, allegedly in an effort to impress his friends.

On 10 May last year, officer Jenchesky Santiago, from Prince George’s County, outside Baltimore, was on patrol in a residential neighbourhood in the town of Bowie.

At the same time, 36-year-old William Cunningham, who is black, was sitting and talking in his cousin’s car, outside his home.

According to a lawsuit filed by Cunningham, Santiago stopped his patrol car and asked him what he was doing, without provocation.

Despite explaining he lived at the address, Santiago claimed the car was parked illegally.

When Cunningham stepped out and walked towards his front door, Santiago allegedly leaped from his own vehicle, screaming “Get back in the car!” and grabbed Cunningham.

A video released by Prince George’s County police this week shows Santiago pulling his gun at Cunningham, berating and pushing him, before holding the weapon to his head, and even placing it in his mouth.

The officer can be heard saying “I dare you to fucking fight me, son.”

According to the lawsuit, Santiago went on to tell both Cunningham and his cousin, Kenneth Smith:

You are going to learn about Officer Santiago. You better ask someone [because] I just came from Iraq and I’m not scared of none of y’all!

He later handcuffed Cunningham, conducted a potentially illegal search of Smith’s car, and threatened to have it towed.

However, following a call from Cunningham’s wife, a police supervisor arrived on the scene and ordered the handcuffs to be taken off Cunningham, and assured Smith his car would not be towed.

Neither man was arrested, and there was no evidence of any criminal activity whatsoever on their part.

Cunningham filed a complaint against Officer Santiago, who was suspended without pay.

Prosecutor Angela Alsobrooks said his behaviour was probably designed to impress two civilian friends who were travelling in his patrol car that day, although Santiago was not authorised to invite them along, the Washington Post reports.

We think, unfortunately, what happened is that he was showing off for his friends.

Santiago was convicted on Wednesday of first-degree assault, and official misconduct.

Cunningham and his wife have launched a separate civil lawsuit against Santiago and local authorities, in which they are seeking a total of $12 million in compensation for alleged rights violations.

His actions are among the worst I’ve seen as Chief of Police and that will be taken into account when I make a decision about his employment.

Santiago, who graduated from the police academy two years ago, has not been fired, pending a possible appeal of his conviction.

Under federal US law, using a weapon in a violent crime carries a mandatory minimum five-year sentence, but Alsobrooks told the Washington Post Santiago could face up to 45 years in prison.

He will be sentenced on 8 January.

On Wednesday, William Cunningham told reporters he was “thankful justice was served.”

If any time you feel your rights are being violated, you should step up to the plate and say something.