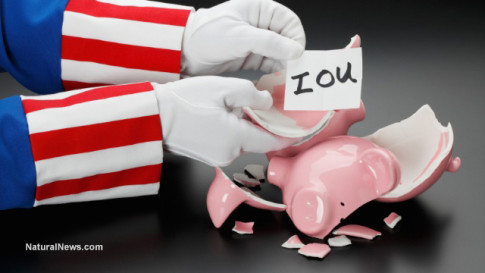 – Running on financial fumes, the Obama Administration now planning on confiscating retirement accounts and pensions across the nation:

Strapped for cash and eager to expand social entitlement programs and government dependency, President Obama is proposing to generate hundreds of billions of dollars in new revenues for the government by taxing, of all things, your retirement.

For the past couple of years, some analysts and administration watchers have predicted that the Obama Administration would eventually make such proposals, given its propensity to produce trillion-dollar budget deficits. And now, it seems, those predictions may be about to come true.

As reported by Market Watch:

“We want your Roth”

Here is a breakdown of some of Obama’s retirement account tax proposals:

— Eliminate the NUA tax break: NUA — net unrealized appreciation — is one of the biggest tax breaks in the entire lengthy, complicated tax code for some owners of retirement accounts. If eliminated, it would hit younger workers the hardest; the proposal is aimed at participants 50 years old or younger by this year (2015).

“Although those 50 and over would be exempt, younger savers who invested in the stock of their company within their retirement plan would miss out on the tax break,” noted Market Watch.

— Limit Roth IRA conversions to pre-tax dollars: After-tax money that you put into your traditional IRA or employer-sponsored retirement plan could no longer be converted to a Roth account.

— Create a 28 percent maximum tax benefit for all retirement account contributions: If you are currently in the 28 percent tax bracket or below, then you won’t be affected per se. But Americans who are in higher tax brackets will no longer receive the full tax deduction for contributions.

“If this provision were to become law, it would create a terrible compliance burden for those in the highest tax brackets with respect to their retirement accounts,” Market Watch reported.

There are others, including a “cap” on retirement savings that would prohibit additional contributions, which would essentially limit how much Americans could save for their retirement (a terrible idea; government economic policy ought to encourage people to save as much as possible).

As reported by WorldNetDaily, the Obama proposals appear to be targeted toward the most popular savings vehicles:

For starters, under the Obama administration proposals, the after-tax money held in traditional IRA or employer-sponsor retirement plans would no longer be eligible for conversion to a popular Roth IRA. There is no up-front tax deduction for Roth IRA contributions as there are in traditional IRAs. Roth distributions are tax-free when the retirement investor follows the rules.

These features make the Roth IRAs ideal saving vehicles both for younger, lower-income workers who do not need the tax advantage on contributions, as well as for older, wealthier taxpayers who want a way to leave their assets to their heirs tax-free.

Uncle Sam is broke – and desperate

Many analysts see the proposals — especially those aimed at Roth IRAs — as inherently unfair. Others, however, say that for now, there may not be much appetite in Congress for new taxes on retirement savings.

“It is unlikely that any of Pres. Obama’s proposals [to increase taxes on retirement savings accounts] will pass under the current Congress,” wrote Karen Beseth of Watchdog.org.

However, debt pressures — which were created by successive congresses and presidents over many years — are liable to tempt many of today’s elected officials to continue to eye retirement account raids.

“That doesn’t mean that these ideas will go away. The national debt is a staggering $18.1 trillion, and unfunded liabilities come to an astronomical $94 trillion,” she wrote, adding that there is currently more than $10 trillion in Americans’ retirement accounts — a tempting target.

1 thought on “Running on financial fumes, the Obama Administration now planning on confiscating retirement accounts and pensions across the nation”