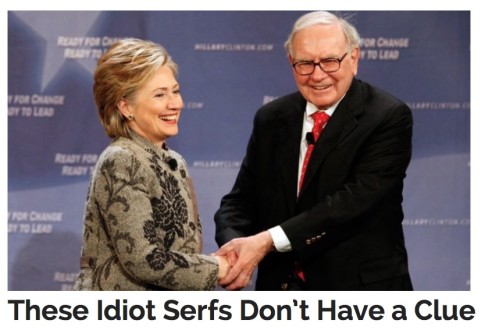 All you need to know about Warren Buffett can be gleaned from this one sentence he uttered in a Bloomberg interview earlier this year:

Clinton has a vision for America that’s very similar to mine.

Indeed, and that vision is one of crony capitalism and oligarchy. Two things both Buffett and Hillary have a long history of supporting.

As such, he’s busying running a $33,400 a plate fundraiser for this faux populist, along with the President of private equity giant Blackstone. Blackstone, of course, is one of the firms that benefited most from the Obama administration’s banker bailouts, by quickly buying up all the foreclosed homes only to turn around rent them right back to the peasants who were evicted. Here are a few articles on the topic to get caught up.

Warren Buffett the Slumlord – Predatory Loans, Kickbacks and Preying on the Poor at Clayton Homes

A Wolf in Sheep’s Clothing

As such, it’s far from surprising that these two financial oligarchs would be aggressively helping to raise money for their chosen puppet, Hillary Clinton. Bloomberg reports:

Berkshire Hathaway Inc.’s Warren Buffett and Blackstone Group LP’s Tony James, two of Hillary Clinton’s most high-profile supporters in the world of finance, will gather at a fundraiser in New York this month to support the Democratic Party, according to people familiar with the event.

Attendees will pay $33,400 to the Hillary Victory Fund, according to the people, who asked not to be identified because there was no public announcement of the event.

Buffett and James, the president of New York-based Blackstone, are among business executives who have been vocal about their support for Clinton, the former U.S. secretary of state. Buffett, the second-richest man in the U.S., has long backed Democrats and called for higher taxes on billionaires like himself.

Clinton “has a vision for America that’s very similar to mine, in terms of everybody being included in the prosperity we enjoy,” Buffett told Bloomberg’s David Westin in a televised interview in September.

Yes, yes everyone included. Kind of similar to what Barry said before unleashing the greatest income inequality in modern American history.