Higher numbers of ocean sites along the US West Coast are showing signs of radiation contamination from Fukushima nuclear accident, Woods Hole Oceanographic Institution (WHOI) reports. However, the measured radioactivity levels still remain well below the US government safety limits for drinking water and direct exposure.

According to scientists responsible for monitoring the spread of Fukushima nuclear radiation, the number of sites reporting the contamination along the US West Coast is on the rise.

Up to now the highest level of radioactive cesium isotopes of 11 Becquerel’s per cubic meter of seawater (about 264 gallons) was found in the sample collected about 2 575 km (1 600 miles) west of San Francisco. The measured amount is 50% higher than in other collected samples, although still over 500 times lower than officially set limits for drinking water, and much below the concern level of direct exposure while in contact with water. 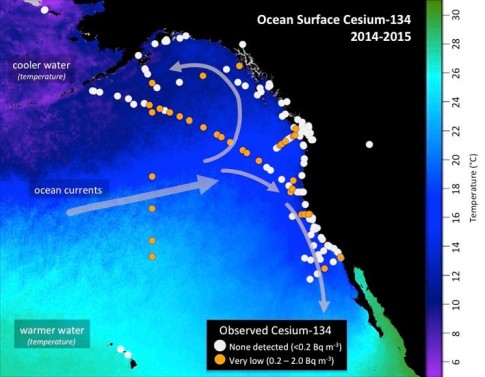 Locations of seawater samples taken by scientists and citizen scientists analyzed at the WHOI for radioactive cesium as part of Our Radioactive Ocean project. Cesium-137 is found throughout the Pacific Ocean and was detectable in all samples collected, while cesium-134 (yellow/orange dots), an indicator of contamination from Fukushima, has been observed offshore and in select coastal areas. Image credit: Jessica Drysdale, WHOI

Ken Buesseler, a marine radiochemist with the Woods Hole Oceanographic Institution (WHOI) and director of the WHOI Center for Marine and Environmental Radioactivity and his colleagues are monitoring the situation with sophisticated sensors that observe minute levels of ocean-borne radioactivity. During 2015, more than 110 new samples has been added in the Pacific. 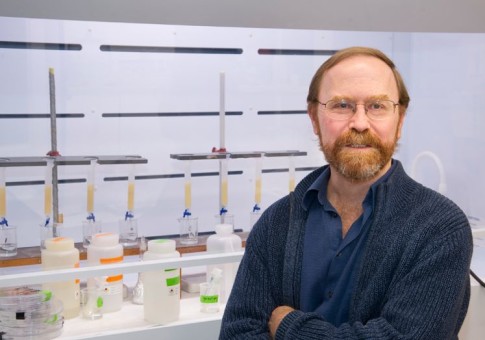 “These new data are important for two reasons. First, despite the fact that the levels of contamination off our shores remain well below government-established safety limits for human health or to marine life, the changing values underscore the need to more closely monitor contamination levels across the Pacific. Second, these long-lived radioisotopes will serve as markers for years to come for scientists studying ocean currents and mixing in coastal and offshore waters,”said Buesseler.

Newest results are in agreement with those reported by the group Kelp Watch and the team of Canadian scientists working under the InFORM umbrella. Buesseler’s work is more focused on the chemistry of the ocean while the InFORM team conducts sampling of biological organisms and so far, they had not found any evidence of Fukushima cesium in fish collected in British Columbia.

According to experts, almost all the water samples collected in the Pacific will contain traces of cesium-137 isotope, and since its half-life is 30 years long, some of it is still considered a left over from nuclear weapons testing carried out in the period between 1950 and 1970. The isotope cesium-134, the “fingerprint” of Fukushima has a 2-year half-life, meaning its decay is much quicker than cesium-137. Scientists calculate traces of cesium-134 to determine how much was actually released from Fukushima in 2011 and add to it an equal amount of cesium-137 that would have been released at the same time.

In cooperation with Japanese scientists, Buesseler monitors the ongoing leaks from Fukushima Dai-ichi by collecting samples from as close as one kilometer (one-half mile) away from the nuclear power plants. In October 2015 the team collected samples of ocean water, marine organisms, seafloor sediment and groundwater along the coast near the reactors.

The measured levels of radioactivity off Fukushima are still elevated, between 10 and 100 times higher than off the US West Coast today and the effort to determine the amount of radioactive materials still being released to the ocean is ongoing.

“Levels today off Japan are thousands of times lower than during the peak releases in 2011. That said, finding values that are still elevated off Fukushima confirms that there is continued release from the plant,” said Buesseler.

Featured image: Locations of seawater samples taken by scientists and citizen scientists analyzed at the WHOI for radioactive cesium as part of Our Radioactive Ocean project. Cesium-137 is found throughout the Pacific Ocean and was detectable in all samples collected, while cesium-134 (yellow/orange dots), an indicator of contamination from Fukushima, has been observed offshore and in select coastal areas. Image credit: Jessica Drysdale, WHOI