Days before the dramatic military escalation between Turkey and Russia, we reported that in order to assure that the Syria proxy war has all the naval support the US-led alliance will need in the coming weeks, both a French and a US aircraft carrier were “steaming” full speed toward the Mediterranean sea, just off the coast of Syria. 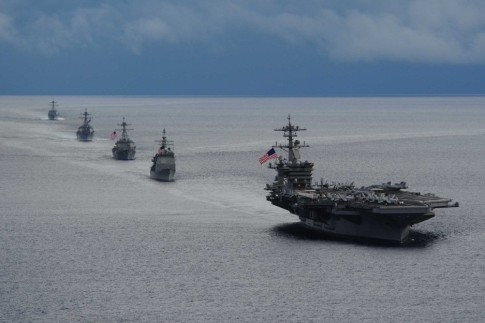 As we noted, “the Truman is expected to reach the Persian Gulf before the year’s end. The U.S. has been launching air strikes into Iraq and Syria from aircraft carriers in the Persian Gulf — at least until last month, when the USS Theodore Roosevelt left the area after an extended deployment. The two-month gap is the first in nearly a decade that the U.S. has had no carrier in the region.”

Specifically, we emphasized the ETA, to wit “Once again, here is the ETA: Carrier Theodore Roosevelt left 5th Fleet in mid-October, leaving that region without a carrier until the Truman CSG gets there, which should be about six weeks, or just around the New Year” and pointed out just how busy the “parking lot” would be when the US aircraft carrier arrived. According to the Navy Times, whom we cited”

ISIS is not the only challenge that awaits the flotilla, which includes the cruiser Anzio, Carrier Wing Air 7, and destroyers Bulkeley, Gravely and Gonzalez. Russian, Chinese and Iranian marines have established their presence in Syria, and Russian warships from the Black Sea have relocated to the eastern Mediterranean to protect fighter jets conducting airstrikes in support of Syria’s Assad regime. In preparation, the strike group’s Composite Training Unit Exercise focused on adversaries that more closely resembled those of the Cold War.

We now know that there is also at least one Russian missile cruiser operating off the Syrian coast and providing air cover for Russian jets operating above the country.

In other words, the Mediterranean Sea surrounding Syria is getting more crowded by the day.

And the bottom line is that now that UK (and shortly German) planes are flying above Syria, and “striking ISIS”, having joined jets from the US, Syria, Iran, Turkey, Russia and France, the same is about to happen to the sea next to Syria.

Which, in our opinion, will also reveal the catalyst for the next, and even more serious, military escalation as one or more ships mysteriously suffer a Gulf of Tonkin incident in a proxy war in which the primary directive so far has clearly been the planting of false flags.

How long? According to the latest US naval map update from Startfor, the Truman is now off the Libyan coast, rapidly approaching Italy, and we expect is ahead of scheduled year-end ETA to its final destination, a few miles off the Syrian coast. 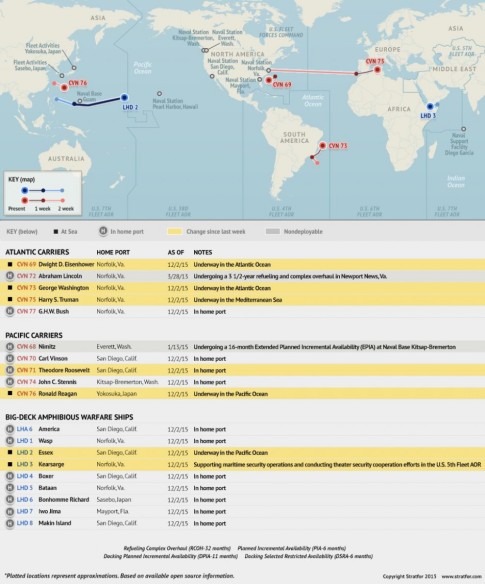