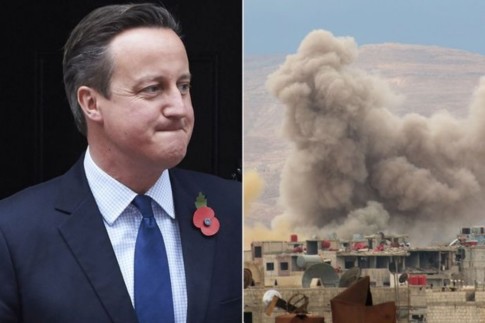 How low can a politician go? It seems David Cameron is trying his best to find out.

For those of you not paying attention to politics across the pond, UK Prime Minister David Cameron is desperately trying to secure backing for his enthusiastic push to start bombing Syria. Labour leader Jeremy Corbyn is proving to be a significant thorn in his side, so this is how Cameron is fighting back.

David Cameron has appealed to Conservative MPs to give him an overall parliamentary majority in favour of military action in Syria by warning them against voting alongside “Jeremy Corbyn and a bunch of terrorist sympathizers”.

“You should not be walking through the lobbies with Jeremy Corbyn and a bunch of terrorist sympathizers,” the prime minister reportedly told the committee.

In a Guardian article Corbyn asks Labour MPs to think of the “terrible consequences” of the wars in the Middle East over the last 14 years.

Meanwhile, the US defense secretary, Ash Carter, announced that a permanent new US “expeditionary” force would operate independently of local troops in Iraq and Syria for the first time. In a significant escalation of the frontline use of American ground troops in the region, Carter told congressional leaders the troops would be based in Iraq but carry out raids across the border.

So generous of him to “tell Congress” about the latest Middle Eastern war escalation.

“It puts everybody on notice in Syria,” he said. “You don’t know at night who is going to be coming in the window.”

Downing Street suffered a blow earlier on Tuesday when a fresh row broke out over Cameron’s claim that there were 70,000-strong moderate forces in Syria prepared to fight Isis, after a senior army general declined to confirm whether those forces included members of Islamist groups.

Separately, the foreign affairs select committee voted four to three in favour of a motion that Cameron “has not adequately addressed concerns” about military action. However, Crispin Blunt, the Tory chairman of the committee who has said he will support the airstrikes after earlier opposing them, played down the findings, saying no view had been expressed on the merits of the motion.

For more on the clownish authoritarianism of David Cameron, see: