Puerto Rico has a problem. The commonwealth needs to make a $354 million bond payment on Tuesday and the government is basically out of money.

We previewed this rather precarious situation twice in the last two weeks (see here and here), noting that this time is indeed “different.” Why? Because unlike August when the island paid only $628,000 of a $58 million payment (so, just about 1%), a large portion of what’s due Tuesday is GO debt guaranteed by the National Public Finance Guarantee Corp. A default on that spells litigation.

As a refresher, here’s a bullet point summary of recent developments from BofAML:

Hedge funds became one of the islands go-to sources for funding in recent years and last month, the worried trustees of the New York City Employees’ Retirement System sent a letter to its hedge funds and distressed debt managers imploring them to “find a just and equitable solution.”

“Some hedge fund and other institutional investors’ reaction to the crisis suggests they will seek to impose draconian terms and conditions on Puerto Rico’s bond issuing entities,” the letter said. “The pension fund said it was concerned that large holders of Puerto Rico debt will raise their stakes and have the securities repaid at the expense of the island’s roads, bridges, sewer systems and other public assets,” Bloomberg added.

Late last month, the commonwealth’s Government Development Bank met with creditors’ advisors in New York in order to provide greater clarity on “the proposed restructuring process,” which the GDB says “is a comprehensive plan that will benefit all parties while supporting the creation of a sustainable path forward.” As Reuters put it earlier today, “Governor Alejandro Garcia Padilla wants to overhaul spending and restructure debt, but bondholders are resisting cuts to repayments, and restructuring discussions look to take months.”

Of course Puerto Rico doesn’t have “months,” they have “hours” and as of Monday evening, no decision had been made on whether to default in order to ensure that the government has the cash to provide public services. As we put it last week, “Padilla isn’t likely to sacrifice the public interest at the altar of the island’s debtors.” Even so, Daniel Hanson (the Height Securities analyst who recently warned that social unrest could be on the horizon as Padilla runs out of money to make government payroll), says a default may mean GDB goes into receivership, an outcome that would “almost certainly result in a stay” on the government’s ability to move money, hindering its ability to operate.

And it’s not just about the GO portion of today’s payment. “Even a default on the non-GO portion could result in litigation against the GDB,” Reuters warns before quoting a creditor source as saying that “of course” everyone would sue. “It would be really messy.”

As for what happens if Padilla defaults on the GO share, “there would be a new round of selling pressure,” John Miller, co-head of fixed income for Nuveen Asset Management told Reuters. The odds of Puerto Rico making another GO bond payment due on Jan. 1 “would drop precipitously,” he added.

As a reminder, the commonwealth owes another $303 million in 30 days. Here, courtesy of Barclays, is a look at debt service payments by entity to 2020: 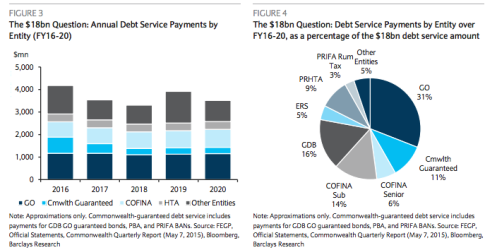 Meanwhile, Padilla is a witnesses at a 10 a.m. Senate Judiciary Committee hearing today. The Committee, headed by Iowa Republican Charles Grassley, is meeting to discuss a legislative proposal to assist Puerto Rico. As Bloomberg put it last month, “Republicans would prefer that Puerto Ricans solve the crisis on their own, but if they can’t, lawmakers will probably seek to impose ‘something like’ a federal control board.” Here’s a preview of the hearing from Bloomberg:

Puerto Rico’s $70 billion debt crisis has already led to four hearings in the U.S. Congress this year, hours of testimony and no consensus over how to help the Caribbean commonwealth. Another hearing today is unlikely to change that.

As Governor Alejandro Garcia Padilla’s administration decides whether to default on $354 million of bond payments coming due, he will appear before a hearing of the Senate Judiciary Committee, which has power over a bill that would allow some Puerto Rico agencies to file for bankruptcy. That measure has stalled for lack of a single Republican sponsor.

Senator Chuck Grassley of Iowa, the committee’s chairman, and fellow Republicans are expected to echo criticism of Puerto Rico expressed at the previous meetings, when lawmakers reprimanded the island’s accounting practices and said any aid would be wasted if it doesn’t contend with its chronic budget shortfalls. Republicans control both houses of Congress.

“Grassley is likely to criticize the current Puerto Rico government for not doing enough in terms of austerity and not producing the audited financial statements,” said Brandon Barford, a partner at Beacon Policy Advisors in Washington and a former Senate aide. “And Grassley is crucial to passing any legislation that would help Puerto Rico.”

The lack of agreement has left the U.S. largely on the sidelines during the island’s escalating fiscal crisis, which resulted from years of borrowing to pay bills as the economy struggled to grow and residents left. Garcia Padilla in June said the island can’t afford to repay what it owes, and today it may default on bonds guaranteed by the central government for the first time.

Puerto Rico’s non-voting representative in Congress, Pedro Pierluisi, President Barack Obama’s administration and Democratic lawmakers have been seeking to grant the island or its agencies the ability to file for bankruptcy, which allows debt to be written down in court. While cities including Detroit have done so, that option isn’t available to Puerto Rico under the law.

As for creditors’ chances of getting paid, Matt Fabian, a partner at Municipal Market Analytics who spoke to Bloomberg, laments that “we’re a trust-based market [and] once that goes away, you’re cooked.” Fabian is referring to the concept of “willingness to pay” in the muni market. He says Puerto Rico’s willingness to pay is the only fundamental credit factor that’s changed, not its ability. Here’s more:

“In corporate situations, issuers and creditors are usually on the same team: more revenue is better, Fabian explained. For states and cities, that’s not always the case. More revenue often comes from an increase in taxes, one of the least popular moves an elected official can make. With an unlimited taxing power, a politician’s willingness to raise taxes to unpopular levels is just as important as its ability to do so, Fabian said.” 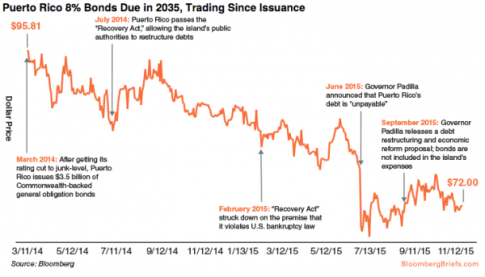 So stay tuned, as this will be a drama-filled 24 hours for Padilla and the commonwealth which, as Reuters colorfully puts it, is “a meteorological paradise mired in economic purgatory.”