Warren Buffett – billionaire investor, opposer of Citizens United but major donor to super-PACs, previous fan of Bernie Sanders, and vehement supporter of the ‘fairness doctrine’ on taxes for everyone but himself – will be joining ‘campaigner for everyday Americans’ Hillary Clinton as she stumps in Omaha this month. 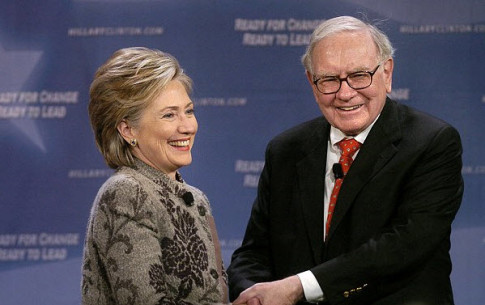 “I think that she is the most likely person to be president of the United States, elected in 2016, and I’m going to vote for her,” Buffett tells the Fox Business Network in an interview that will air Monday evening.

Then, as noted in September during a CNBC interview, the billionaire investor said that he admires the way that Sanders has run his campaign.

“I think Bernie Sanders has been a terrific campaigner. He campaigns exactly as I would campaign if I were a candidate,” Buffett said.

Despite his opposition to the Citizens United ruling, Buffett has seemingly overcome his reluctance to donate to so-called super PACs, pledging to vote for Hillary Clinton and donating to the “Ready for Hillary” group in 2014.

In the interview, Buffett also said that it was a mistake for Clinton to make jokes about the controversy surrounding her use of a personal email address and private server while she was secretary of state.

“I don’t think it was the best way to handle it,” Buffett said.

The Berkshire Hathaway CEO reaffirmed his support for Clinton’s policies, and said that the email scandal was not particularly concerning for him. He has committed to vote for Clinton in the 2016 election.

And so now, he is going to stump for Hillary in Omaha this month…

The Democratic presidential front-runner will be stumping in Omaha on Dec. 16, with the help of famed Omaha investor Warren Buffett.

A Clinton campaign staffer said the visit is an effort to organize grassroots support before Nebraska’s Democratic caucuses.

She is also expected to talk about tax reform with Buffett, who has called for an income tax increase on the nation’s wealthier citizens.

We are sure average joes and janes across America will feel relieved that two such ‘feet on the ground, down to earth’ people are representing their needs and hearing their fears.

As Mike Krieger previousl noted,it seems at least 60% of Americans get the joke. From Quinnipiac:

Clinton has the lowest rating for honesty as American voters say 60 – 36 percent she is not honest and trustworthy.

Trump is not honest and trustworthy, voters say 58 – 38 percent.

Clinton is deemed less trustworthy than Donald Trump, which is a remarkably achievement.

Carson gets the best honesty grades among top candidates, a positive 62 – 24 percent.

Fascinating… given he has now been outed as a lying shitbag not once, not twice, but three times.