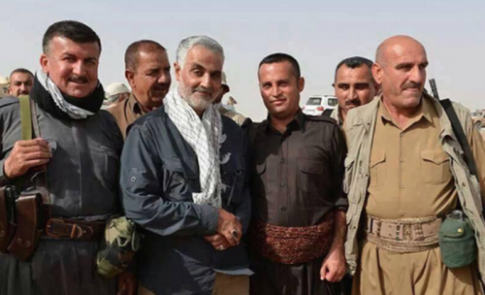 – Iraqi PM Rejects US “Boots On Ground” As Shiite Militias Pledge To Kill US Soldiers:

There are probably a lot of lessons we can learn from the conflict in Syria.

We might, for instance, pause and reflect on the morality of subjecting millions of people to untold pain and suffering in pursuit of geopolitical expediency. Or we could make a serious effort to reevaluate a foreign policy that too often centers around bringing about regime change in far away lands without considering the ramifications and potential for blowback.

Of course that kind of deep self-reflection will never happen in Washington, but fortunately, there’s a far simpler lesson that requires very little in the way of high level thinking to understand. Here it is: arming and funding Islamic militants you just met is always a bad idea.

In the worst case scenario you lose control of them only to watch in horror as the Frankenstein you created escapes from the lab, rumbles out of the castle, and proceeds to terrorize and murder all the villagers. In the best case scenario, they do what you thought they were going to do (in this case fight Assad’s army) but they occasionally go off the rails and blow up a Russian search and rescue helicopter after executing one of Moscow’s pilots.

In Syria, the FSA falls into the “best case scenario” category but as we’ve been at pains to explain, arming them now makes even less sense than it did initially because, i) you risk starting a world war as they are using US-supplied weapons to fire on Iranian soldiers and Russian equipment, and, on a practical level, ii) they’re using US-supplied weapons to kill the same Iran-backed Shiite militiamen who are fighting with the Iraqi regulars just across the border.

U.S. airstrikes targeting ISIS around Ramadi are proving “not very effective,” according to the head of the Iran-backed militias surrounding the conquered Iraqi city. “We expect more from the Americans,” Hadi al-Ameri told NBC News. “There are no real airstrikes against ISIS headquarters.” – NBC, June 23

Iraqi forces and the Shiite militias fighting alongside them announced Friday that they had retaken the oil refinery at Baiji from Islamic State militants, in some of the first significant progress against the extremist group after months of stalled efforts. – New York Times, October 16

You get the idea.

Make no mistake, there are some very serious questions about these militias’ human rights record, but the point is that when it comes to fighting Sunni extremists, there’s no one better to have on your side than fearsome Shiite militiamen even if some of those militiamen were responsible for killing hundreds of US soldiers with copper-tipped IEDs during the Iraq occupation.

As we documented extensively in “Who Really Controls Iraq? Inside Iran’s Powerful Proxy Armies,” Tehran controls these fighters and thanks to their effectiveness on the battlefield, the militias effectively control the US-armed Iraqi regulars. As Reuters noted in October, “the Fifth Iraqi Army Division now reports to the militias’ chain of command, not to the military’s, according to several U.S. and coalition military officials. The division rarely communicates with the Defence Ministry’s joint operation command, from which Abadi and senior Iraqi officers monitor the war, the officials said.”

Here’s a bit more color from the same investigative piece that should give you an idea of what’s going on in Iraq:

Iraqi Prime Minister Haider al-Abadi, a Shi’ite, came to office just over a year ago backed by both the United States and Iran. He promised to rebuild the fragmented country he inherited from his predecessor, Nuri al-Maliki, who was widely accused of fueling sectarian divisions. Since then, though, even more power has shifted from the government to the militia leaders.

Those leaders are friendly with Abadi. But the most influential describe themselves as loyal not only to Iraq but also to Iran’s supreme leader, Ayatollah Ali Khamenei. Three big militias – Amiri’s Badr Organisation, Asaib Ahl al-Haq and Kataib Hezbollah – use the Iranian Shi’ite cleric’s image on either their posters or websites. Badr officials describe their relationship with Iran as good for Iraq’s national interests.

Iraq, for all intents and purposes, is now an Iranian colony both politically and militarily.

In the wake of the US invasion in 2003, Tehran was concerned that the Cheney Bush administration would move to invade Iran next. This, along with a desire to aid the Americans in fighting The Taliban in Afghanistan (who Iran now covertly supports in an effort to usurp ISIS influence), led the IRGC to forge a quasi-friendly relationship with The Pentagon. And then George Bush put Iran in his infamous “Axis of Evil.” From that point forward the Quds encouraged Iraq’s Shiite militias to target American troops, which goes a long way towards explaining why the US accuses Iran of being the world’s number one state sponsor of terror (of course that’s absurd, but hey, we didn’t say it, Washington did).

Fast forward to 2015 and the US has essentially comes to terms with the fact that Iran’s proxies are going to fight ISIS alongside the Iraqi regulars. It’s only annoying for Washington when those proxies say things like this: “the United States lacks the decisiveness and the readiness to supply weapons needed to eliminate militancy in the region.” But while it’s fine to taunt the US regarding Washington’s highly suspicious lack of commitment to the fight against ISIS in Iraq, Iran is not keen on seeing a sizeable US troop presence on its border (again) which is why it should come as no surprise to you that on the heels of Ash Carter’s announcement earlier today that the US is set to send SpecOps to Iraq, Kataib Hezbollah immediately threatened to attack them. Here’s Retuers:

“We will chase and fight any American force deployed in Iraq,” said Jafaar Hussaini, a spokesman for one of the Shi’ite armed groups, Kata’ib Hezbollah. “Any such American force will become a primary target for our group. We fought them before and we are ready to resume fighting.”

“All Iraqis look to (the Americans) as occupiers who are not trustworthy,” said Muen al-Kadhimi, a senior aide to the leader of the Badr Organisation.

“The militias, grouped with volunteer fighters under a government-run umbrella, are seen as a bulwark in Iraq’s battle against Islamic State,” Reuters adds.

Predictably, PM Abadi was out just hours later reiterating (he already said this once back in October) that Iraq does “not need foreign ground combat forces on Iraqi land.”

Obviously, these pronouncements might as well have been issued directly from Tehran because that’s unquestionably who’s pulling the strings here, but this does set up an interesting scenario. Washington probably wasn’t looking for permission in the first place despite Carter’s lip service to Baghdad on Tuesday. The US will likely embed the Spec Ops with the Peshmerga via the KRG in Erbil.

The question then, is this: if the Iraqi regulars are now loyal to the Shiite militias and if Iran is pulling the strings in Baghdad, what will the relationship be between a US/Peshmerga effort to fight ISIS and an Iran/Iraqi effort? Furthermore, what happens if Russia begins bombing ISIS targets in Iraq?

Time will tell, but the big picture takeaway here is this: this war doesn’t end in Syria.