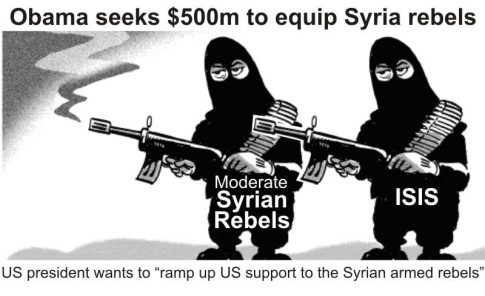 Earlier this year, The Pentagon had a plan. Apparently, someone in Centcom decided that there weren’t enough proxy armies battling for control of Syria and so, what the US needed to do was spend $500 million on a new “train and equip” program which, if all went according to plan, would result in the recruitment of more than 5,000 fearsome warriors by the end of 2015.

Of course the CIA and The Pentagon had already spent years arming, funding, and training Syrian rebels but as it turns out, most of them either proved to be wholly ineffective or else became terrorists. Although the CIA program was still operational, the Obama administration thought it would be advantageous to have (another) parallel program in place wherein “properly vetted” fighters would receive a steady stream of logistical support, training, and weapons. 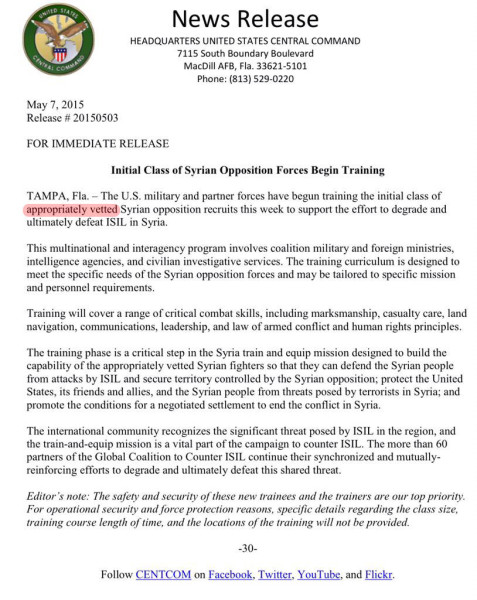 What exactly this new crack squad was supposed to do is still largely unclear. The official line – of course – was that they would fight ISIS and presumably al-Nusra. That would be amusing enough if it were true. That is, the US is widely suspected of providing support to ISIS early on in the fight and the FSA (which is explicitly backed by the US and its regional allies) formed an alliance with al-Nusra long ago. In short, if the US really was training soldiers to fight ISIS and al-Nusra, the program represented an attempt on Washington’s part to clean up a mess of America’s own making by doing the exact same thing (i.e. arming insurgents) that created the mess in the first place.

Of course it’s unlikely that the program’s real goal was to fight Islamic State. After all, the US needs ISIS to continue the fight against Assad and indeed, at the time of the program’s inception, Russia wasn’t in Syria yet meaning there was still a very real possibility that Islamic State would eventually march on Damascus. It seems far more plausible that the new group of recruits were simply the latest effort on Washington’s part to field a reliable anti-Assad army that could be counted upon to continue to destabilize the regime and perpetuate American interests.

Well, not to put too fine a point on it, but the effort was a miserable failure. By the time summer rolled around, the US had only managed to recruit around a dozen or so fighters. The group’s commander and deputy commander were kidnapped by al-Nusra in late July and in September, Centcom chief Gen. Lloyd Austin told congress that only around “four or five” soldiers were still on the ground. “Let’s not kid ourselves, that’s a joke. This is just a total failure,” Sen. Kelly Ayotte (R-N.H.) and Sen. Jeff Sessions (R-Ala.) told Austin and Christine Wormuth, Undersecretary of Defense for Policy.

Things only got worse a week later when The Pentagon admitted that the “four or five” fighters still operating under the program were forced to hand over six “pickup trucks” and an ammo cache to al-Qaeda in order to secure safe passage to who knows where.

Mercifully, the program was scrapped in early October.

But that experience did not deter the US from providing weapons to groups deemed “moderate” by The Pentagon and CIA. In fact, after Russia and Iran ramped up their efforts to support Assad’s depleted forces, the US, Turkey, Saudi Arabia, and Qatar stepped up the weapons shipments to the FSA and other militants operating in Syria. The US, for instance, air dropped 50 tons of weapons into the middle of desert last month. The stash was supposedly intended for the brand new “Syrian Arab Coalition” which, as we outlined in side-splitting detail, is a largely fictional group the US made up in order to hide the fact that the weapons and ammo really went to the Kurdish YPG, an outcome that would be decisively unpalatable to Washington’s allies in Ankara.

Finally, in the latest example of what can go wrong when you provide weapons to militants, the FSA’s 1st Coastal Brigade used a US-supplied TOW to destroy a Russian search rescue helicopter last Tuesday in the wake of Turkey’s move to down a Russian Su-24 near the Syrian border.

Obviously, all of these programs have been remarkably successful which is probably why President Obama has decided to approve some $800 million in additional aid to Syrian “moderates” and to the government in Kiev as part of the annual defense policy bill. Here’s RT:

President Barack Obama has signed the Pentagon funding bill giving $800 million in aid to both “moderate rebels” in Syria and the Kiev regime. Obama also vowed to work around provisions blocking the closure of the Guantanamo Bay detention camp.

Obama signed the National Defense Authorization Act (NDAA) of 2015 on the eve of Thanksgiving. He previously vetoed the $612 billion bill in a well-publicized ceremony in October, arguing that the lawmakers dodged the spending limits by shifting money into the warfighting slush fund.

Although Congress then trimmed the bill down to $607 billion, the cuts did not affect the $300 million aid to the Ukrainian government, or the “zombie” surveillance blimp program that has cost nearly $3 billion so far. It also left almost $500 million dedicated to arming and training “moderate rebels” in Syria – a program the Pentagon had already abandoned.

Amusingly, “the NDAA specifically prohibits any US aid going to the Islamic State of Iraq and Syria (ISIS), the Jabhat Al-Nusra Front, Al-Qaeda, the Khorasan Group, or any other violent extremist organization.” Obviously that’s a sick joke. As we saw last Monday, US-made TOWs make their way quickly to al-Nusra and what seems clear from the language in the bill is that Washington fully intends to continue to funnel arms to the FSA which is not only allied with al-Qaeda and who knows who else, but which is also now in the business of executing Russian pilots and blowing up search and rescue planes. 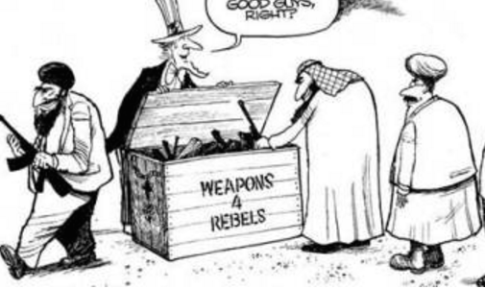 So there you have it America, your tax dollars hard at work funding proxy armies in Syria and a puppet government in Ukraine, as Washington struggles to preserve the last vestiges of US hegemony and Moscow fights to return the world to bipolarity.

SEC. 1225. MATTERS RELATING TO SUPPORT FOR THE VETTED SYRIAN OPPOSITION.

(a) REPORT ON POTENTIAL SUPPORT REQUIRED.— (1) IN GENERAL.—Not later than 90 days after the date of the enactment of this Act, the Secretary of Defense shall submit to the appropriate congressional committees a report setting forth a description of the military support the Secretary considers necessary to provide to recipients of assistance under section 1209 of the Carl Levin and Howard P. ‘‘Buck’’ McKeon

National Defense Authorization Act for Fiscal Year 2015 (Public Law 113–291; 128 Stat. 3541) upon their return to Syria to ensure their ability to meet the intended purposes of such assistance.

(2) COVERED POTENTIAL SUPPORT.—The support the Secretary may consider necessary to provide for purposes of the report required by paragraph (1) is the following:

(E) Any other support the Secretary considers appropriate for purposes of the report.

(3) ELEMENTS.—The report required by paragraph (1) shall include the following:

(A) For each type of support the Secretary considers necessary to provide as described in paragraph (1), a description of the actions to be taken by the Secretary to ensure that such support would not benefit any of the following:

(i) The Islamic State of Iraq and Syria (ISIS), the Jabhat Al-Nusra Front, al-Qaeda, the Khorasan Group, or any other violent extremist organization

(B) An estimate of the cost of providing such support.

(b) STRATEGY FOR SYRIA.—

(1) IN GENERAL.—Not later than 90 days after the date of the enactment of this Act, the Secretary of Defense shall, in coordination with the Secretary of State, submit to the appropriate congressional committees a strategy for Syria.

(2) ELEMENTS.—The strategy required by paragraph (1) shall include the following:

1209(a) of the Carl Levin and Howard P. ‘‘Buck’’McKeon National Defense Authorization Act for Fiscal Year 2015.

(B) A description of the political and military objectives and end states for Syria.

(C) A description of means by which the assistance will support the political and military objectives and end states for Syria.

(D) An explanation of the manner in which the military campaign in Syria and Iraq is integrated.

(c) APPROPRIATE CONGRESSIONAL COMMITTEES DEFINED.—In subsections (a) and (b), the term ‘‘appropriate congressional committees’’ has the meaning given that term in section 1209(e)(2) of the Carl Levin and Howard P. ‘‘Buck’’ McKeon National Defense

(d) ADDITIONAL MATTERS FOR QUARTERLY PROGRESS REPORTS ON ASSISTANCE TO THE VETTED OPPOSITION.—

(B) in paragraph (11) by striking the period at the end and inserting a semicolon; and

(C) by adding at the end the following new paragraphs:

‘‘(12) a description of support, if any, provided to appropriately vetted recipients pursuant to subsection (a) while those forces are located in Syria, including—

‘‘(13) a description of the number of appropriately vetted recipients located in Syria, the approximate locations in which they are operating, and the number of known casualties among such recipients.’’.

(2) EFFECTIVE DATE.—The amendments made by paragraph

(1) shall take effect on the date of the enactment of this Act, and shall apply with respect to quarterly reports submitted under subsection (d) of section 1209 of the Carl Levin and Howard P. ‘‘Buck’’ McKeon National Defense Authorization Act for Fiscal Year 2015 after that date.

Subsection (f) of such section is amended—

(1) by striking ‘‘The Secretary of Defense’’ and inserting the following:

‘‘(1) IN GENERAL.—The Secretary of Defense’’; and (2) by adding at the end the following new paragraph:

‘‘(2) INFORMATION ACCOMPANYING REPROGRAMMING REQUESTS.—Each request under paragraph (1) shall include the following:

‘‘(A) The amount, type, and purpose of assistance to be funded pursuant to such request.

‘‘(B) The budget, implementation timeline with milestones, and anticipated delivery schedule for such assistance.’’