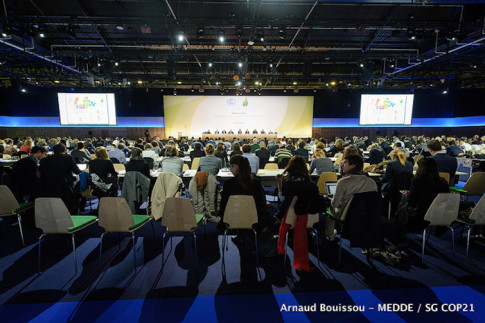 PARIS, France (INTELLIHUB) — One-hundred and fifty heads of government, a.k.a. the elite, are gathering over the course of the next few weeks for a massive climate summit that’s anticipated to attract and indoctrinate over 40,000 visitors from around the globe.

The summit, dubbed COP21, is sponsored by the United Nations (UN) and will reportedly focus on combating climate change. However it’s doubtful that geoengineering, which ironically is mostly to blame for current climate patterns, will even be a topic of interest to scheduled speakers. To boot any chance of that information making it out to the general public is limited as 24 activists have already been placed under house arrest.

Additionally, and most importantly, ’emergency powers’ declared in wake of the recent Paris attacks, in the name of terrorism, were extended for a period of up to 90-days by the country’s leadership allowing for such activists to be jailed in advance of the summit or at anytime within period leaving us several possibilities to chew on.

One possibility we can entertain would be that the attacks may have been staged or carried out in a manner to ramp-up security ahead of the summit on purpose which would ultimately quell all protests and send a strong message to onlookers. And to be perfectly honest this option is completely plausible. I mean after all it has already been confirmed that active shooter drills were being conducted across the city by officials that very morning, just like they were during the infamous ‘7/7 bombings.’ I mean really–what would be the chances of that? Need I say anymore?

If we were to trust the beloved French Parliament we could also assume another possibility; one that suggests the attacks actually did occur just as reported. However maybe the powers-that-be just couldn’t let the crisis go to waste so-to-speak and captivated on it; something Chi Town’s Rahm Emanuel also aspires to do, likely after reading too many Winston Churchill quotes as a child. Either way the arrests were conducted and more will be on the way.

Reuters confirms the arrests took place ahead of the summit and reported how the Interior Minister Bernard Cazeneuve, “said the activists were suspected of planning violent protests at the talks which kick off on Sunday, a day ahead of the opening ceremony, and run until Dec. 11.”

While authorities know that these people have no connection to terror movements they have still managed to silence their voices.