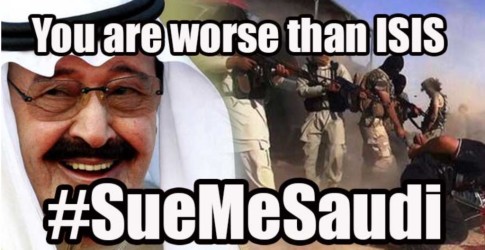 – Another New Low – Saudi Arabia Threatens to Sue Twitter Users Who Compare it to ISIS:

Authorities in Saudi Arabia have long been annoyed that everyone keeps suggesting they are anything like the Islamic State. Sure, they say, perhaps some of the laws on the books may look similar to the punishments in the extremist organization, but the Saudi kingdom is a sovereign state that abides by the rule of law and uses these punishments with discretion.

Now, reports in the Saudi press suggest that authorities have a new tactic for those who compare them to the Islamic State: taking them to court. According to a report in pro-government newspaper Al Riyadh, the Saudi justice ministry is planning to sue a Twitter user who suggested that a death sentence recently handed out to a Palestinian artist for apostasy was “ISIS-like.”

“Questioning the fairness of the courts is to question the justice of the Kingdom and its judicial system based on Islamic law, which guarantees rights and ensures human dignity,” a source in the justice ministry told the newspaper, according to a translation by Reuters. The ministry would not hesitate to sue “any media that slandered the religious judiciary of the Kingdom,” the source added.

I suppose it’s not apparent to the Saudis how the only thing this pathetic threat does is further confirm the worst suspicions of its rapidly growing population of critics from around the world. Of course, it’s not the first time these authoritarian monarchs have expressed a panic attack about Twitter. Recall the following post from 2013: Saudi Religious Police Chief Goes on the Attack…Against Twitter.

The best part about this latest Saudi stupidity is the fact that it’s backfiring spectacularly, with a meme created on Twitter where users are begging the Saudis to sue them via the hashtag #SueMeSaudi. Simply brilliant.

People are inviting Saudi Arabia to sue them after the state reportedly threatened legal action against someone who compared its imminent execution of a Palestinian poet to the actions of Islamic State.

The country’s justice ministry would “sue the person who described … the sentencing of a man to death for apostasy as being ‘ISIS-like’,” a source within the ministry told the pro-government newspaperAl-Riyadh.

Here are a couple examples:

Saudi Arabia, please sue me.I will be in Leb next week for extradition. “Saudi Arabia to sue anyone who compares their justice syst to Isis”

Thugs till the end.