Late last month in “Russia’s Mid-East Takeover Continues As Afghanistan Requests Military Assistance From Moscow,” we noted, with some amusement, that Kabul was set to request a weapons delivery from Russia to aid in the fight against the Taliban. “Afghanistan, battered by worsening security, is reaching out to an old ally and patron—Russia—just as the Kremlin is seeking to reassert its position as a heavyweight on the world stage,” WSJ reported, on the way to detailing a request from President Ashraf Ghani who “asked Moscow for artillery, small arms and Mi-35 helicopter gunships for his country’s struggling military.”

The request came just a little over a week after President Obama canceled plans to bring the majority of American troops still stationed in Afghanistan home. Under Obama’s previous plan, Washington would withdraw most of the 9,800 troops operating in the country by the end of next year, leaving a force of just 1,000. Now, all 9,800 troops will remain for “most” of next year and 5,500 troops will remain in 2017. The official reason for the about face is that a resurgent Taliban now controls more territory in Afghanistan than at any other time since 2001. 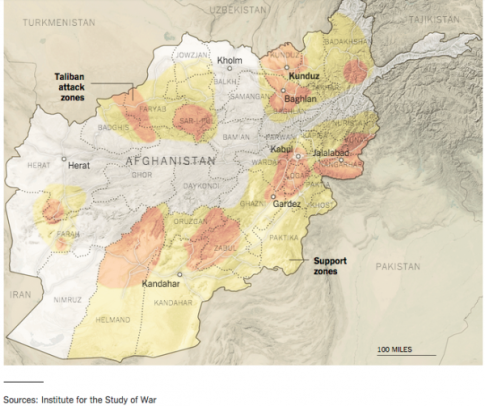 As a reminder, the Taliban took Kabul in 1996 and ruled until the regime was toppled by the US in the wake of 9/11. 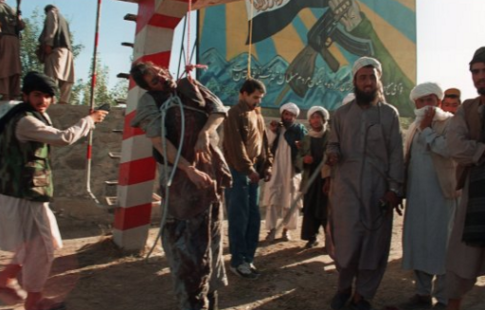 The late September Taliban offensive in Kunduz (which would eventually lead to the tragic US bombing of an MSF hospital) resulted in a dramatic prison break. Here’s a video from Vice News who interviewed a man who escaped from his cell during the chaos. This should give you an idea about what the situation is like on the ground:

Kunduz was the first Afghan city to fall to the Taliban in 14 years, although it was retaken in fairly short order by government troops operating under cover of US airstrikes. Be that as it may, the situation is still remarkably precarious. As The New York Times wrote earlier this week, “Taliban fighters still control large stretches of territory, including positions as close as two miles from the city gates. Illustrating the danger, officials said that five to nine rockets landed in the city on Thursday, with one falling about 450 yards from the auditorium where Mr. Ghani was holding a tense meeting with residents.”

And as is the case with the Houthis in Yemen and with ISIS after last year’s debacle at Mosul in Iraq, the Taliban are armed with US-supplied weapons. Here’s The Times again: “Tribal elders and local officials repeatedly warned Mr. Ghani during the meeting that the insurgents could storm the city again, using the government vehicles and ammunition they looted during their brief stay. A recent government fact-finding mission found that the Taliban took about 37 Humvees and 1,000 weapons with them when they withdrew.”

That, in brief, is how things look on the ground. So, like Damascus and Baghdad, Kabul has turned to Moscow for help confronting a deteriorating security situation. From the time Russia began flying combat missions from Latakia, other countries in the region battling Sunni extremists have sought to enlist The Kremlin’s help in the face of what many view as increasingly ineffectual assistance from the US.

On Saturday, we got the first confirmation that Moscow is indeed set to assist Kabul in the fight against the Taliban (or against ISIS, or against whoever the government needs to say they’re fighting in order to get weapons) as Afghan Interior Ministry spokesman Najib Danish confirmed reports that Russia is set to deliver some 10,000 AK-47 Kalashnikovs to the Afghan government over the next 30 days.

“Luckily, I would say Russia’s eagerness towards Afghanistan was higher than before. 10,000 Kalashnikovs have been approved which would be handed over to the interior ministry after arriving in Kabul in next 20 days,” Fazal Hadi Muslimyar, speaker of the Upper House of the Parliament told Radio Free Europe.

But that’s not all. As Bloomberg goes on to note, Afghanistan lawmakers are also considering inviting Russia to help fight terrorists on Afghan soil.

According to Khaama Press, “Kabul is in contact with Moscow for receiving more weapons and gunship helicopters.”

And while Khaama goes on to say that Russian lawmakers have generally rejected the notion that Moscow would get directly involved in operations against terrorist targets in Afghanistan, there’s a distinct possibility that could change. As Ramzan Kadyrov, the pro-Kremlin leader of Russia’s Chechen Republic, put it, “Kabul needs the support of Russia, just like Syria.”

Yes, “just like Syria”, and just like Iraq, and just like any other country where Sunni extremists armed and financed by the West and its regional allies serve as a constant source of instability and a perpetual threat to the establishment and maintenance of strong central governments.

Time will tell if Russia decides to take a more active role in Afghanistan but in the meantime it’s worth noting that targets in the country are likely well within range of Moscow’s Caspian Sea fleet which has launched a number of cruise missile strikes against ISIS positions in Syria. Additionally, bear in mind that Iran (one of Russia’s closest allies on the world stage and The Kremlin’s staunchest supporter in the Mid-East) despises the Taliban and would likely be more than happy to assist in an operation to rout the group in Afghanistan just as they assissted the US in removing Mullah Omar from power. In 1998, Iran threatened to destroy the Taliban in the space of “24 hours” in retailiation for the death of eight Iranian diplomats in Mazar-e-Sharif. Still, the situation is complicated immeasurably by the presence of ISIS. Indeed, Tehran is now thought to be providing the Taliban with money and weapons in an effort to head off the spread of Islamic State in Afghanistan and counter US influence. As WSJ noted over the summer, “Tehran is already battling Islamic State, also known as Daesh, in Syria and Iraq, and it is wary of a new front line emerging close to its eastern border” “Iran seeks to counter Daesh with the Taliban,” said an Afghan security official. But again – and we hinted at this in the piece referenced at the outset – one shouldn’t be fooled into believing that Iran is looking to forge a long-term relationship with a group that Tehran has every reason to hate. “It’s unclear, however, how far Iran will go to promote the Taliban,” WSJ continues, before quoting an unnamed foreign official as saying that Iran “wouldn’t want the Taliban to become too strong. They just want to make sure that they have some levers in their hands, because if the Taliban would win, God forbid, then they would lose all their leverage.”

So who would Russia be fighting in Afghanistan and who will be on the receiving end of the 10,000 AKs and helicopter gunships Moscow is set to send to Kabul? If those weapons can help the Afghan military roll back ISIS in the country, will Tehran cut off its support for the Taliban once the group is no longer useful? Who knows, but what should be clear from everything said above is that Afghanistan (like Syria and like Iraq) is a country plagued by a complex war and that war is being facilitated by, i) clandestine and sometimes unlikely alliances and ii) the presence of the US military.

Whatever the case, the stage does indeed seem to be set for another conflict wherein everyone involved claims to be fighting ISIS, but in reality, all participants have their own vision for Afghanistan’s future.

Finally, because we like to throw in a little comic relief where relevant, we close with Bakr al-Baghdadi’s description of the now deceased Mullah Omar, the legendary, one-eyed Taliban commander who, like Baghdadi, once declared himself caliph:

“He’s a fool and an illiterate warlord.”