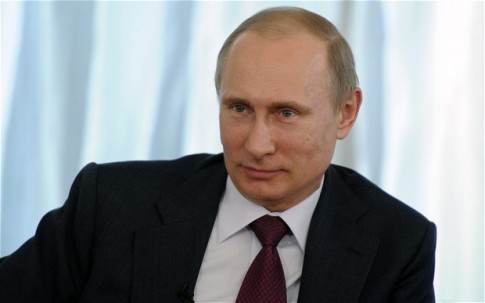 – Ukraine: Vladimir Putin threatens to turn off the gas:

In threat to switch off Ukraine’s gas, Russian president acknowledges gas deliveries to the European Union would also be jeopardised

President Vladimir Putin threatened the “extreme measure” on Thursday of cutting off Russian gas for Ukraine unless the country pays in advance for all its supplies.

In a stark letter to 18 world leaders, Mr Putin acknowledged that, in such a “critical situation”, gas deliveries to the European Union would also be jeopardised.

The EU buys a third of its gas from Russia, about half of which arrives through pipelines running across Ukraine. But Mr Putin accused the EU of causing the current crisis, leaving Russia with “no alternative” but to toughen its approach.

Mr Putin’s threat suggests that Russia is preparing to use its control of gas supplies to escalate the pressure on Ukraine and the country’s European allies.

Ukraine is particularly exposed because it depends on Russia for almost all of its gas. But the EU is far less vulnerable. The reliance of its members on Russian gas supplied via Ukraine ranges from 80 per cent in the case of Hungary to zero for Britain.

Nonetheless, his letter suggests that Russia is opening a new front against Ukraine. Mr Putin has already deployed between 35,000 and 40,000 troops on Ukraine’s eastern frontier, raising the possibility of a full scale invasion.

On Thursday, Nato released 20 satellite pictures of this military build-up, showing a concentration of tanks, helicopters and MiG-31 jet fighters close to the border.

Brigadier Gary Deakin, from Nato’s military headquarters, said this “very capable” force could go into action within 12 hours of receiving the order, adding that the strike aircraft were only a “few minutes” flying time from Ukraine.

In the letter, he claims that Russia has always tried to help the “stability of the Ukrainian economy by supplying it with natural gas at cut-rate prices”.

These “unprecedented privileges and discounts” had saved Ukraine $17 billion (£10.2 billion) since 2009. In addition, the country had failed to pay various fines totalling $18.4 billion (£11 billion).

All in all, Russia had provided a subsidy of $35.4 billion (£21.2 billion) to Ukraine’s economy, claimed Mr Putin. Russia’s only thanks for this generosity, he added, was that Ukraine had stopped paying for its gas last August.

Gazprom, the Russian state energy giant, would respond by demanding “advance payment”, wrote Mr Putin. “In the event of further violation of the conditions of payment,” he added, Gazprom would “completely or partially cease gas deliveries”.

From now on, Russia would supply “only” the volume of gas that Ukraine had paid for “one month” in advance.

“Undoubtedly, this is an extreme measure,” added Mr Putin. “We fully realise that this increases the risk of siphoning off natural gas passing through Ukraine’s territory and heading to European consumers. We also realise that this may make it difficult for Ukraine to accumulate sufficient gas reserves for use in the autumn and winter.”

Mr Putin wrote: “The fact that our European partners have unilaterally withdrawn from the concerted efforts to resolve the Ukrainian crisis, and even from holding consultations with the Russian side, leaves Russia no alternative.”

However, the EU is the biggest single buyer of Russia’s oil and gas, so Mr Putin’s government would lose billions of dollars from any disruption of supplies. All sides in this dispute are interdependent – and all would suffer if the gas stopped flowing.

Russia would be the biggest loser of all, according to analysts at Commerzbank. “A voluntary suspension of Russia’s deliveries or EU sanctions in the form of commodity export limitations would be disastrous for the Russian economy above all – and would far exceed the potential damage for the Western world,” they wrote.

The impact on Europe would also be reduced by the fact that large quantities of gas remain in storage after the mild winter. At the end of March, Britain’s biggest storage facility, Rough, was more than 40 per cent full, compared with 1 per cent at the same time last year.