Turkish military sources speaking to Al-Monitor on condition of anonymity said the number of mock dogfights between Turkish and Greek warplanes in 2014 has sharply increased compared to 2013. A report by the Greek Ekathimerini news agency confirmed the Turkish accounts. According to the agency, in just the first month of 2014, Turkish jets violated Greek airspace 1,017 times. That is twice the total number of violations in the first six months of 2013. (Source)

On Tuesday evening, we took a close look at the circumstances surrounding Turkey’s decision to shoot down a Russian Su-24 near the Syrian border. The incident was the most meaningful escalation in the conflict to date and marks the first time a Russian or Soviet plane has been downed by NATO since 1953.

The pilots ejected, one of whom was shot in his parachute by FSA-affiliated Alwiya al-Ashar militiamen who subsequently celebrated over the body. About an hour later, the FSA’s 1st Coastal Brigade used a US-made TOW to destroy a Russian search and rescue helicopter, killing one Russian marine.

For his part, Vladimir Putin called Erdogan a backstabber and proceeded to accuse Turkey of flying the black flag of ISIS and funding the Islamic State cause by facilitating the sale of illegal crude. 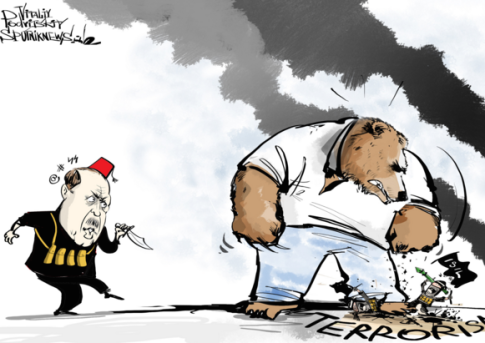 Miraculously, there were no further escalations overnight, but as we outlined in detail on Tuesday, something doesn’t add up about the story Ankara is telling. According to a letter Turkey sent to UN Secretary-General Ban Ki-moon and the 15 members of the UN Security Council, the Russian warplane, flying at 19,000 feet, “violated Turkish national airspace to a depth of 1.36 miles and 1.15 miles in length for 17 seconds.” If you do the math on that, it means the Su-24 was basically flying at stall speed.

Here’s how we summed up the situation:

It’s important not to forget the context here. Ankara is fiercly anti-Assad and in addition to being generally displeased with Russia’s efforts to support the regime, just four days ago, Turkey summoned Russian ambassador Andrey Karlov over the alleged bombing of Turkish villages near the border.

In short, it looks like Ankara saw an opportunity to shoot down a Russian jet in retaliation for strikes on Turkish rebel fighters who are operating alongside anti-Assad forces.

With that in mind, note that on Wednesday, Sergei Lavrov (not known for holding his tongue or even for observing any semblance of diplomatic decorum) accused Ankara of conducting a pre-meditated strike. “We have serious doubts this was an unintended incident and believe this is a planned provocation,” Lavrov said, after a meeting with his Turkish counterpart Mevlut Cavusoglu. Lavrov also said he would back a plan to close the Turkish-Syrian border. “I think this is the right desicion. I hope President Hollande will tell us more about the issue tommorow. We would be ready to consider all measures that needed for this [closing the border]. By closing the border we will basically thwart the terrorist threat in Syria,” he said.

Russia also said the Syrian army (so, Iran or Hezbollah) had retrieved the second pilot who is now “alive and well.” Here’s how French ambassador Alexandre Orlov summed up the situation in an interview with Europe 1 radio: “One on board was wounded when he parachuted down and killed in a savage way on the ground by the jihadists in the area. The other managed to escape and, according to the latest information, has been picked up by the Syrian army and should be going back to the Russian air force base.”

Note the difference in the way Russia and the US describes the FSA. For the US, they are a “moderate opposition group,” for the Russians, they are “jihadists.” Considering they are allied with al-Qaeda, and judging from the gruesome videos released by the group on Tuesday, you’d be forgiven if you’re inclined to go with Moscow’s characterization.

Meanwhile, Russia is set to deploy the S-400s. “Russia also said Wednesday it would take new measures in Syria to protect its aircraft, deploying powerful S-400 anti-air missile systems, which have a range of nearly 250 miles, to Russia’s Khmeimim airbase in northwestern Syria,” WaPo reports, adding that “the airbase is located a little under 20 miles from the Turkish border, and has the potential to create headaches for Turkish and other aircraft in a U.S.-led coalition that are carrying out a separate airstrike campaign in Syria.”

These are of course the same S-400s which the Western media claimed were already at Latakia earlier this month – a contention Russia denied at the time. Whether or not they were there is now immaterial – they’ll be operational from this point on. As a reminder, here’s what the systems look like:

What seems clear (as noted above and as discussed at length on Tuesday), is that Turkey is keen on protecting Alwiya al-Ashar and other anti-Assad forces operating near the Turkish border. Indeed, Sergei Lavrov said as much in a press briefing on Wednesday. “[The] question arises whether Turkey is defending Syria area to protect rebel infrastructure,” Lavrov said at a press briefing in Moscow on Wednesday.

Indeed, Ankara looks to be stepping up its military presence near the area where the Russian plane was shot down. “Turkey has moved 20 tanks from west of country to southern province of Gaziantep, bordering Syria, and increased number of F-16s flying patrols along border to 18 as of yesterday,” state-run Anadolu Agency said today. Here’s a visual that shows you where Gaziantep is in relation to Aleppo and to the Su-24 crash site: 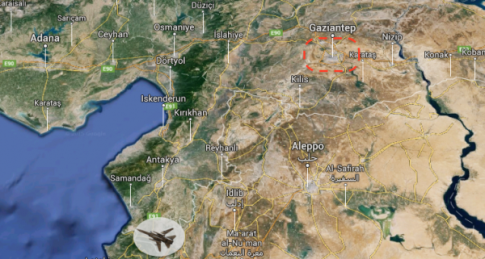 The logical next question to ask here is how prepared Turkey is to defend FSA positions because it’s only a matter of time before the IRGC and Hezbollah invade these areas on the ground and when that happens, you can expect Ankara to cry genocide against Syria’s Turkmen miniority. What comes after that is anyone’s guess.

In the meantime, Lavrov says Russia “is not going to war against Turkey,” but remember what we said last month when Turkey shot down a Russian drone: “For now, it appears as though The Kremlin is going to take this one in stride, but that may be “strike one” so to speak, meaning NATO might have one or two more pot shots it can take before Erdogan gets a slightly less “neighborly” call from Moscow.”