Needless to say, Moscow and Ankara are at odds over precisely what happened on Tuesday when a Russian Su-24 was shot down near the Syrian border.

The two pilots ejected and attempted to parachute to safety but Turkmen FSA-allied Alwiya al-Ashar militiamen shot at them as they fell before posting a video purporting to show rebel soldiers celebrating over one of the bodies. It only got worse from there when the FSA’s 1st Coastal Brigade used a US-made TOW to destroy a Russian search and rescue helicopter.

Clearly, this was a marked escalation and indeed it was the first time a NATO member had engaged a Russian or Soviet warplane in more than 60 years.

The Kremlin was not happy as Vladimir Putin – who was meeting with King Abdullah in Jordan – proceeded to brand Erdogan a “backstabber” and an ISIS supporter. Sergei Lavrov subsequently canceled a planned trip to Turkey.

At issue now, is whether the Russian fighter jet did indeed, as Turkey claims, venture into Turkish airspace or whether the Turks actually engaged Moscow’s warplane in the skies over Syria.

Here’s Russia’s version of the story, presented via a video released by the Defense Ministry: 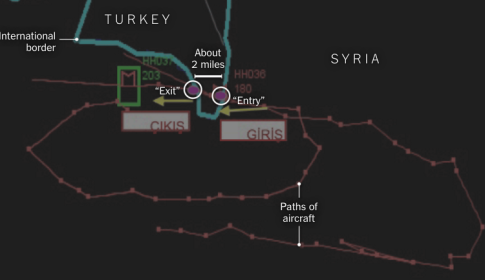 Finally, here’s The New York Times with a compare and constrast visual: 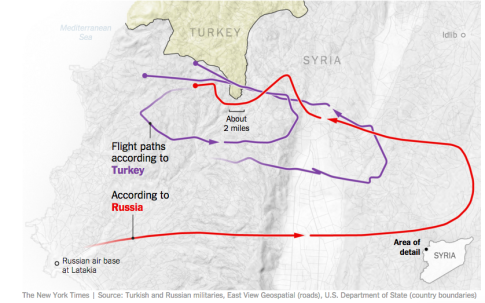 In the wake of an emergency NATO meeting this afternoon, new information has come to light. First, there’s Ankara’s letter to UN Secretary-General Ban Ki-moon and the 15 members of the UN Security Council. Here it is: 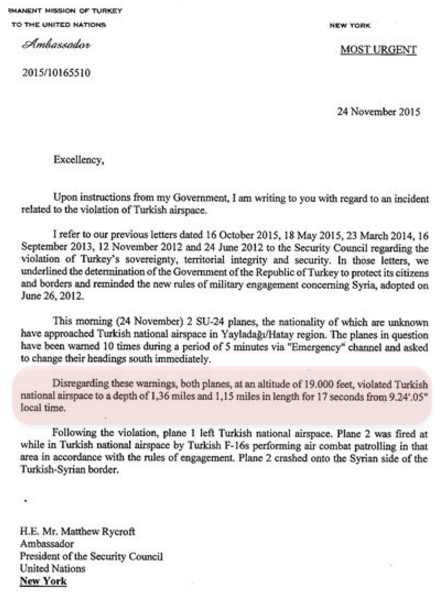 The highlighted passage reads: “Disregarding these warnings, both planes, at an altitude of 19,000 feet, violated Turkish national airspace to a depth of 1.36 miles and 1.15 miles in length for 17 seconds from 9:24:05 local time.”

So, as RT notes, even if we buy Turkey’s story (i.e. if we accept that Russia actually did violate Turkish airspace), then it would appear that Ankara has something of an itchy trigger finger. That is, Turkey was apparently willing to risk sparking a wider conflict between NATO and Russia over a 17 second incursion.

But something doesn’t sound right.

In other words, as Sputnik put it earlier this evening, “according to those numbers, the Su-24 would have had to be flying at stall speed.”

So if we assume the Su-24 was actually going much faster, was 17 seconds more like 5 seconds? Or perhaps even less?

It’s important not to forget the context here. Ankara is fiercly anti-Assad and in addition to being generally displeased with Russia’s efforts to support the regime, just four days ago, Turkey summoned Russian ambassador Andrey Karlov over the alleged bombing of Turkish villages near the border. “Turkey has asked Russia to ‘immediately end its operation,'” AFP reported, adding that “Ankara warned bombing villages populated by the Turkmen minority in Syria could lead to ‘serious consequences.'”

In short, it looks like Ankara saw an opportunity to shoot down a Russian jet in retaliation for strikes on Turkish rebel fighters who are operating alongside anti-Assad forces. Erdogan is essentially gambling that Russia will not retailiate militarily against Turkey because doing so would open the door for a direct confrontation with NATO.

Time will tell whether that gamble pays off or whether Moscow decides that the next time a Turkish F-16 gets “lost” over Latakia, a little payback is in order.