– Russia Suspends Military Cooperation With Turkey, Will Use Warships To “Destroy Any Threats To Russian Planes”:

Despite demands from France’s Hollande, America’s Obama, and NATO’s Stoltenberg that this situation not esclate, it appears Putin is not taking the shooting down of a fighter jet lying down. The seemingly cagey confirmation by NATO and Obama of Turkey’s claims that Russia invaded its airspace has been rebuked by Russia which claims the Hmeimim airbase radar shows the attacking Turkish plane violating Syrian airspace. In response, Russia is moving a Cruiser ‘Moskva’ off the coast to strengthen air-defenses – just as French and US carriers are on their way.

Here is The Turkish version mapping of the flight paths. 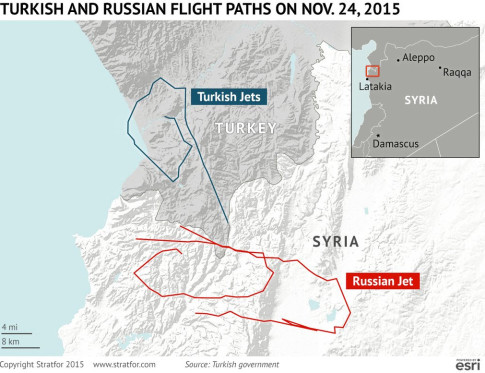 The Missile cruiser in question: 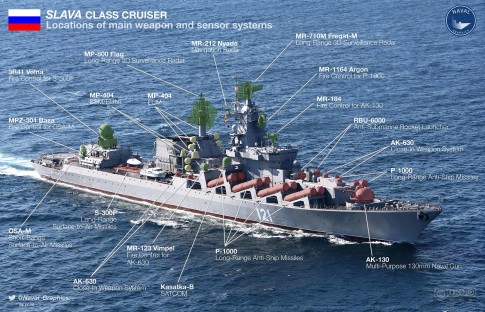 The reason for the deployment:

Just like the downing of flight MH17 over Ukraine, it has quickly become a case of “he said, she said”:

“We assume the strike was carried out with a close range missile with an infra-red seeker,” Rudskoy said. “The Turkish jet made no attempts to communicate or establish visual contact with our crew that our equipment would have registered. The Su-24 was hit by a missile over Syria’s territory.”

Sergey Rudskoy, a top official with the Russian General Staff, condemned the attack on the Russian bomber in Syrian airspace by a Turkish fighter jet as “a severe violation of international law”. He stressed that the Su-24 was downed over the Syrian territory. The crash site was four kilometers away from the Turkish border, he said.

As a result, Russia now plans to implement new measures aimed at strengthening the security of the country’s air base in Syria and in particular to bolster air defense. Russian guided missile cruiser Moskva, equipped with the ‘Fort’ air defense system, similar to the S-300, will be deployed off Latakia province’s coast.

“We warn that every target posing a potential threat will be destroyed,” lieutenant general Sergey Rudskoy said during the briefing.

“All military contacts with Turkey will be suspended,” he added.

Furthermore, as the Russian Ministry of Defense explained, going forward, any Turkish plane that enters Syrian airspace will be fair game.

And again, all this is happening as both the French carrier de Gaulle and the US carrier CVN-75 USS Harry S. Truman are on their way to a very dangerous rendezvous off the Syrian coast. 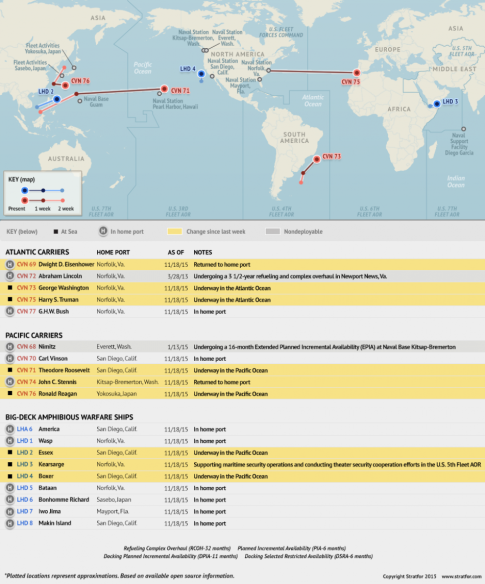 So just as we warned in September, the situation has become a complete rerun of the 2013 Syria “Mediterranean” showdown, with full naval engagement by all parties, except this time the tensions are significantly escalated, a Russian fighter jet has just been taken down, US and French aircraft carriers are arriving in weeks, and Putin will not hestitate to go as far as he has to in order to save face.

4 thoughts on “Russia Suspends Military Cooperation With Turkey, Will Use Warships To ‘DESTROY ANY THREATS TO RUSSIAN PLANES’”