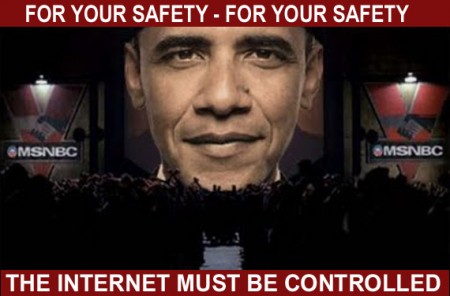 “The Islamic State has grown that strong due to the irresponsible policy of the United States,” exclaimed Russian PM Dmitry Medvedev this morning, demanding that “really consolidated efforts” are needed to counter ISIS’ terrorist threats. This comes just hours after President Obama toughened his rhetoric, vowing that the global coalition formed to destroy ISIS “will not relent,” adding, rather oddly, that the group responsible for the Paris terror attacks is “a bunch of killers with good social media.”

Obama was hit with a wave of criticism in the wake of the terrorists’ attacks in France and Lebanon, which left hundreds dead, having described that burst of violence as a “setback” in the battle against ISIS. So now, as CNN reports, U.S. President Barack Obama toughened his rhetoric against ISIS at a weekend press conference in Malaysia…

The group responsible for the Paris terror attacks is “a bunch of killers with good social media,” he said. “They are dangerous and they’ve caused great hardship to … an overwhelming majority of people.”

The global coalition formed to destroy ISIS “will not relent,” he vowed. “We will not accept the idea that terrorist assaults on restaurants and theaters and hotels are the new normal, or that we are powerless to stop them.”

Obama’s stronger language on ISIS came after days of criticism for his response to the tragedy in Paris but did not signal a policy shift by the administration.

“They can’t beat us on the battlefield, so they try to terrorize us into being afraid, and changing our patterns of behavior, and panicking, and abandoning our allies and partners, and retreating from the world,” Obama said. “As president, I will not let that happen.”

It’s “absolutely false” that “we are somehow at war with an entire religion,” he said. “The United States could never be at any war with any religion because America is made up by multiple religions. We’re strengthened by people from every religion, including Muslim Americans. So I want to be as clear as I can on this — prejudice and discrimination helps (ISIS) and undermines our national security.“

But while President Obama never mentioned the ‘success’ of the Russians on ISIS’ local turf,The Economist hints strongly that Islamic State may be lashing out abroad because it has been weakened nearer home…

It may be a coincidence that plots to murder hundreds in Paris, blow up an aircraft over Sinai and kill indiscriminately on the streets in Beirut all came to fruition so close together. They may have been long planned; similar attempts earlier may have been thwarted. 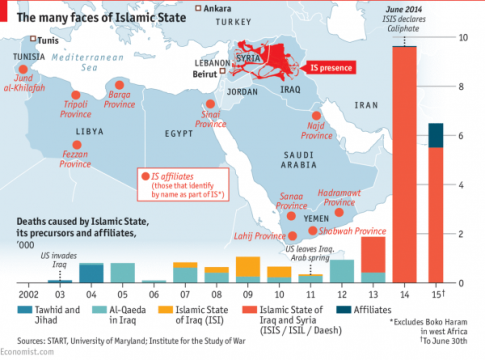 But it may also be a considered response to challenges that IS faces closer to home.

And Russia is not holding back any punches, as ITAR-TASS reports, in its efforts to apportion blame and seek a stronger coalition…

Really consolidated efforts are needed to counter terrorist threat, with no discrimination among the allies into one’s own or somebody else’s, Russian Prime Minister Dmitry Medvedev told journalists on Sunday, commenting on the U.S. president’s pronouncements about Russia’s role in the Syrian conflict.

“The Islamic State (a terrorist organization outlawed in Russia) has grown that strong due to the irresponsible policy of the United States. Instead of focusing common efforts on countering terrorism, the United States and its allies plunged into struggle against Syria’s legitimate President Bashar Assad,” Medvedev said before flying to Phnom Penh.

“Reasonable policy in the countries of the Middle East, whether it be Syria, Egypt or Iraq, for all countries, including the United States, is to be in supporting the legitimate authorities capable of ensuring the state’s integrity but not in shaking the situation.

In his words, there were sad examples of such irresponsible policy. “Once, the United States was behind Al Qaeda growth that led to the 9/11 tragedy. These lessons only prove that consolidated efforts are needed against terrorist threat, without dividing allies into one’s own and somebody else’s,” he stressed.*  *  *

With talk like that, any ‘coalition’ of the capable is increasingly unlikely… and furthermore, ‘accidental’ collisions more likely.